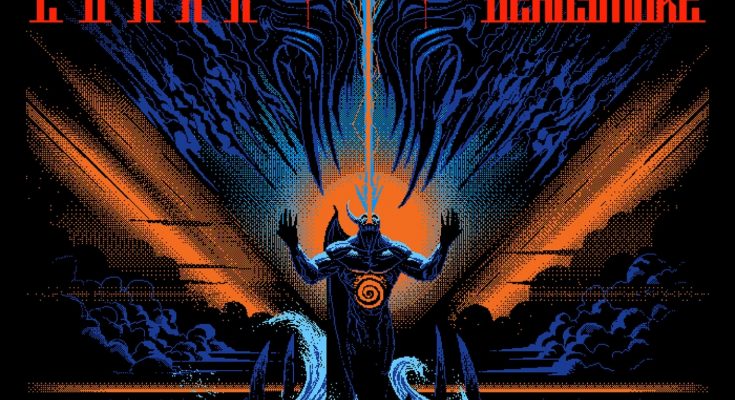 ‘Doom Sessions Vol. 1’ is the first in a series of splits to be put out by Heavy Psych Sounds Records. It’s a bit of a surprise still what bands that the label will have in store for us, but obviously they will all roam the realms of doom in one or the other way. To launch the anthology they got hold of none other than the mighty barbarian horde that is Conan, who takes up one side of the 12″ with one mammoth song, promisingly monikered ‘Beheaded’.

It is an uncharacteristically long song for the Cimmerians from Liverpool, spanning wide across the Hyrkanian desert with more than 17 minutes.
Consequently, they don’t jump straight into battle, like on ‘Foehammer’ for instance, but slowly trample your skull beneath their sandalled feet. In keeping with the series, the track takes advantage of its span by getting a bit fuzzier and hazy in the second smokey half.

On the other side of this slab of vinyl, you have one of Heavy Psych Sounds‘ house bands, Italy’s Deadsmoke. This bong party has been clearly inhaling some of the Cimmerian’s breath as well. Especially, the vocals and the barbaric pounding are a dead ringer for the Liverpudlians. Fortunately, the Italian combo does dare to go out own their own a bit. Their first offering, ‘Dethroned Concrete’, starts out in hammering Conan fashion before into glory they ride in a galloping groove. On the desert plains of battlefield itself, however, they take a turn for the psychedelic in cinematic, widescreen technicolor.

In summary, Conan delivers a mammoth of track, worthy of them and a bit left-field compared to their regular output where Deadsmoke, even though they might be less known, have put out a calling card here that will make many want to check out their other works as well. What a way to kick of what is going to be one hell of a series of splits.