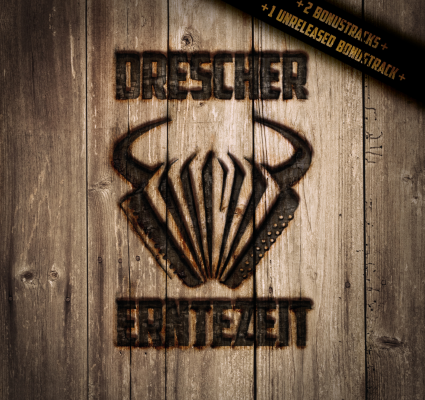 The thrash/folk metal band Drescher  is an Austrian band formed in the town Steinfeld. The band emerged from their former band Bleed which was formed in 2009-2013. And in 2013 Gernot Engel and Bernd Wograndl created the band Drescher. Drescher‘s first studio album was Erntezeit with the digital single First Blood released in 2014 by Napalm Records. Immediately after that album they started touring with the band Subway to Sally. They were nominated for the Amadeus Austrian music awards for best Austrian metal band but blood sucking vampires from outer space won the awards and in 2016 they released the album Steinfeld (for our review go here). The fans where really happy about the album and now they also brought us a re-release of the debut album Erntezeit.

The album has 3 bonus songs and better audio than before. The 3 bonus songs are all cover songs. The first song is Ass in Pik  from the legendary heavy metal band Mötorhead, based on the classic Ace of Spades. Their second bonus track is Rock me Amadeus, a cover from the Austrian singer Falco. And last but not least is the song Olles Schwoars, based on a song from the legendary rock band The Rolling Stones.

Personally I really love this album. The first time I heard the album I thought I got the wrong CD because the very first song starts with an accordion intro. And that is something that I never heard but came out really good. But I still hoped that there would be more new than just some covers to the re-issue. I personally think that if they placed more time in writing lyrics they could have satisfied their fans even more. But Drescher put a lot of time in the translations of the cover songs. And their second album was already out on the shelves so all the writing time was probably used on that release. Overall I think the CD is a must for anyone who likes folk and/or thrash metal, you definitely should give this a try if you don’t know them yet.