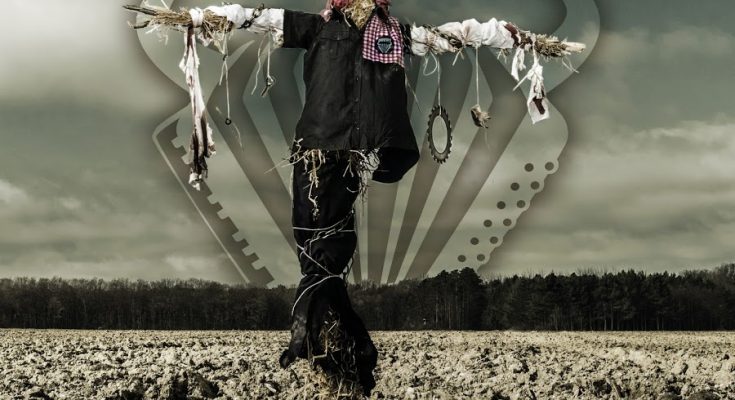 Dresch Metal is back! With their second album Steinfeld, the Austrian whackadoos of Drescher have struck again and they continue to mosh down the same road they started with First Blood and Erntezeit. Still not a clue what exactly frontman Bernd Wograndl is growling about, as all lyrics are in some weird Austrian dialect. There is little doubt about the Dreschergeist though: these guys know how to throw a freaking party!

Imagine Korpiklaani, but on Harleys. And masculine. Seriously heavy guitars with a shitload of good old humppa and a high susceptibility to sing-along. The use of one single accordion, instead of an entire battery of folk instruments, sure is refreshing compared to my usual shot of folk metal. It gives the music a very rustic an cozy touch, it sets the scene to deserted inn at the top of an old abandoned ski resort. A blizzard, a roaring fire and a couple of freshly filled pints completes the picture. Moreover, despite the high potential for mindless happy humppa, Drescher is more than that. There is a depressive nostalgia to the sound of the music and Wograndl’s uncompromising desperate growls, most audible on Unten, Regen, Olles Ok and Endlich Leben. At the same time, Drescher shows their versatility by the mercilessly vivacious humppa on Adrenalin, Guade Oide Zeit and Der Held. There are some extremely catchy riffs and the accordion and the guitars complement each other subtly yet perfectly. The coolest part of this album is the very refreshing cover of Slayer’s classic Raining Blood, a song we’ve all heard a zillion times but never in this way!

In conclusion, Drescher offers a refreshing view on what folk metal can be, flirting with the harder genres and yet offering more depth than your average call to guzzle beer. There isn’t much diversity between the songs but that’s ok. Steinfeld is the perfect background soundtrack for a cozy rainy day.  I’d almost hope it would rain more often!