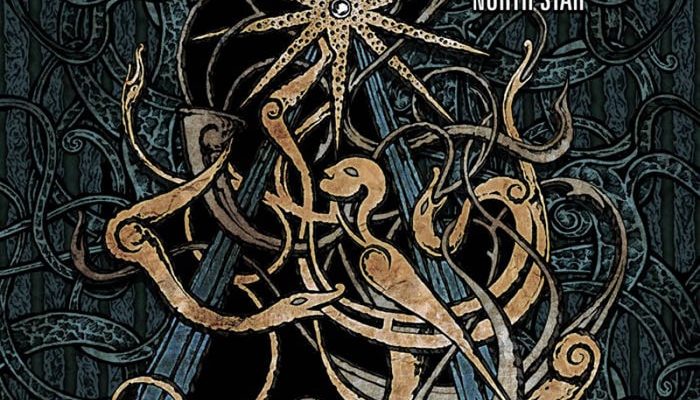 North Star, the eighth studio album from Nordic black metal band EINHERJER, was released on the 26th of February, 3 years after their last album, Norrøne Spor. For the first time in 25 years, since their debut album Dragons of the North, the band was set to release under the well known label Napalm Records.

It starts off with The blood And The Iron. The beefy bass drum and the accompanying guitars immediately set a compelling tone. The song really gets going however when Frode Glesnes starts singing. What follows is Stars. This track is one of the more atmospheric ones on North Star. The bass drums still play a massive part in this song and the depth in the toms is just awesome. The repetitiveness might prove to be too much for some people however, especially to keep them entertained for the full 5 minutes 32 seconds, but I found they put enough variation in it for me personally.

When I saw the title of the next track, West Coast Groove, I couldn’t help but think “what is this going to be…”. I was glad to hear that the song was better than the title. It’s more technical than the previous songs on the album and there are some very nice solos flung in there. Ascension starts off very nicely with the lead guitar taking the front of the stage instead of the drums. This doesn’t last all too long though because the drums and singing are accentuated fairly quickly. They play with the whole “changing instrument prominence” throughout the whole song, keeping it interesting despite it being the longest song on the album.

Higher Fire is of a nice, steady pace and here too, EINHERJER manages to pull the listener in with ease. The song is fairly simple, other than the several neat guitar solos used as a filler. This however is not a problem because there is beauty to be found in the simplicity. After the fade-out of Higher Fire there is 5 seconds of quietness. This makes for a nice bridge to the more energetic start of Echoes In Blood, which keeps the energy flowing throughout the course of the whole track. Listen to the graves is another fast one and, like Stars, a really nice atmospheric addition to North Star.

Final song is Chasing the serpent. The chorus has a very heavy metal feel to it. This is all due to the bombastic toms and the clean echo on the fry singing. It is a actually a pretty catchy chorus and definitely something that will be sung along with at shows. I do have the feeling however that it’s so different to the rest that this will be the most memorable thing about Chasing the serpent. I know that was the fact in my case.