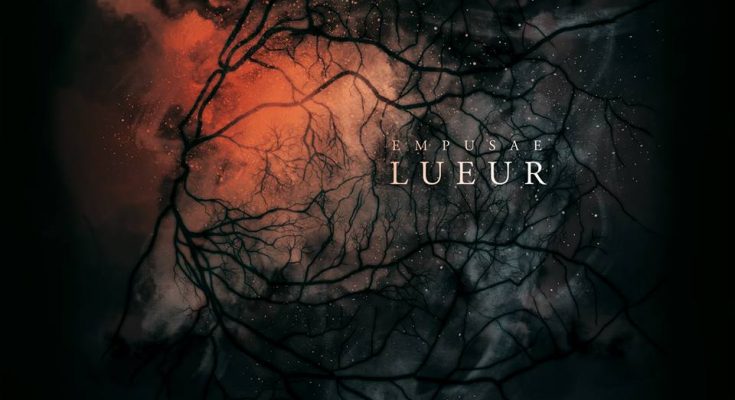 The musical landscape is a very diverse one nowadays. A landscape full of riches and treasures where creativity knows no bounds and the music more often than not conveys an emotion or feeling upon the listener. We’re all free to dabble in-between genres and discover and delve into new musical depths at our leisure. One such discovery recently led me to Empusae with his newest album Lueur. Even though he already has countless releases to his name and has become a master of his craft it was only recently my musical adventure led me to him. Short story: I liked it, a lot. But it’d be a shame to not delve deeper into this cavern of an album.

A pitch black organic cavern that endlessly changes its form and appearance to keep you trapped in its depths. Where the walls watch your every step but are merely a mirror reflecting nothing but the darkness. What you find in this album will strongly depend on yourself and what you’re looking for. With two songs of twenty minutes each there’s a lot of room to add depth, to meticulously build layer upon layer until you create just the atmosphere you want. That’s exactly what Nicolas Van Meirhaeghe did. There’s so much going on that every time you listen to it again you discover this new element or new sound and just like that the cavern changes its shape and you’re still walking around in the darkness.

Guiding Light is the first song on this album, a fitting name. Greeted by a mysterious chanting and Collin‘s clean vocals (CHVE, Amenra, Kingdom…) it creates an almost welcoming tone. Before you know it you’re drifting away mindlessly on the soothing voice of Collin and the warm embrace of those synths. Accompanied by a mellow drum and piano. The tone of the song suddenly changes when a seemingly brass orchestra announces an impending doom with a heavy bass. Do mind this is a one man project. Collin‘s clean vocals change to desperate screams when it’s all too late and you’re already this far on the album. You might as well continue.

Follow up is Retinae Tenebrae. For some reason the beginning of this song reminded me very strongly of A Sweet Masquerade by Barst on Tri Muerti. It gave of a similar vibe to me. The first song was the guiding light to the darkness of the second song. The first half of this number keeps this mysterious flow. The piano and strings represent the initial marvel for this almost unreal cavern. You wander deeper into the song with your eyes (ears) on anything but the path ahead of you. Before long you realise you’re trapped and that’s when angst, panic and desperation take over. An almost industrial and artificial sound takes control until the song slowly fades out.

Lueur as a whole feels a lot more organic compared to some of his previous work. It listens like a tranquil river, every note is granted a final breath before the next one takes over. The music slowly streams down a hill and sets it’s natural course.

You can get a preview of Guiding Lights on Soundcloud.