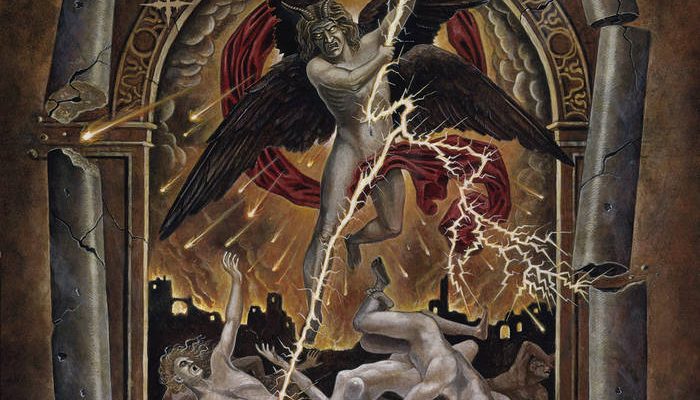 These bands have been stirring up a violent storm with their Satanic and occult tendencies. The Scandinavian black metal bands generally applied the tradition of orthodox qualities to their music. One of the leading underground labels that brought a number of outstanding bands since the early 90’s is Osmose Productions. With a huge roster of quality new acts such as Akrotheism, Avslut, Dødsfall, Nordjevel, Antaeus, etc…

Another band that implements an extreme fashion of orthodoxy is the Norwegian black metal band Enepsigos. Formed in 2015 by V.I.T.H.R (vocals), Rituul (guitars and bass) and Thorns (drums). Their second album ‘Wrath of Wraths’ isn’t a manifestation of the second wave of black metal. Through the six infernal tracks, the band blends atonal riffs and raw black metal. With a cold dissonance and straight blast beats, they create a demonic and infernal feel.

The opening track ‘Shields of Faith‘ sets a hellish tone for the album, the guitars are stimulated by the courtesy of HM-2. Enepsigos embodies the malign and the infernal side of black metal. One of the strong elements is the malevolent tone of the vocals. The guitar effects are centered to create a sinister ambiance, the peculiar blend of chainsaw guitars constantly shaping up the atmosphere. Veering through a varied tempo Enepsigos delivers a bizarre model of black metal. Another element that make the songs sound very dark is the infusion of the dense riffs.

‘Wrath of Wraths’ is a solid continuation from the debut ‘Plague of Plagues’. This odd perspective to black metal proves how black metal music has changed over time and instead of relying on the melodic hooks Enepsigos applies other effects to create more depth to the songs. By emphasizing the HM-2 guitar tone which gives power to the music, the band also integrates atmospherics and dissonance. The sound feels fundamental and sinisterly brutal due to the buzzing guitars, although the band captures the grimy tone. The vocalization is uttered in a bizarre fashion which brings the thrills down your spine. With grim and ritualistic undertones that simultaneously sound brutal, the riffs are packed with ominous sensation.

The third track ‘Seventh Seal’ meanders through a twisted tempo, this paradigm art of unorthodox black metal reminds me of bands such as Ondskapt, Ofermod, and Valkyrja. The second opus is extremely raw, old fashioned and homogeneous, although the riffing style compliments the Swedish HM-2 style. Many compositions are structured to the songwriting where it combines slow and eerie riffs.

Enepsigos‘ gritty performance focuses on the guitars which produce a buzzing tone as they add a distinctive quality to the songs. The drums alter between the hammering pace and blast beats these dynamics are consistently concentrated to make a conquering tone. At times the guitars create chilling currents and the blast of the dynamic drums with the abhorrent vocalization gives you goosebumps. The powerful tone of the buzzing riffs on ‘The Whore is the Temple’ shows that Enepsigos has more to offer than what you’d expect.

Besides the straightforward blast beats the song later becomes imbued with an eerie and subtle atmosphere. These bold features demonstrate the fundamental aspects of the band. Yet there are other hidden features that lurk within the recess of this Norwegian cult band. ‘Cups of Anger‘, for instance, unveils the concealed side of Enepsigos, and that’s when the ambient and the Gregorian choir soundscapes suddenly begin to foam.

‘Water and Flesh’ show more variation in terms of riffing. The track is fixed at a blistering tempo of raw guitar riffs and blast beats. The melodies are placed somewhere in the mid-tempo range. Enepsigos has managed to release a strong and gritty album. ‘Wrath of Wraths’ channels the orthodox style of infernal black metal and it’s worth checking it out if you like bands such as Ondskapt and Ofermod.