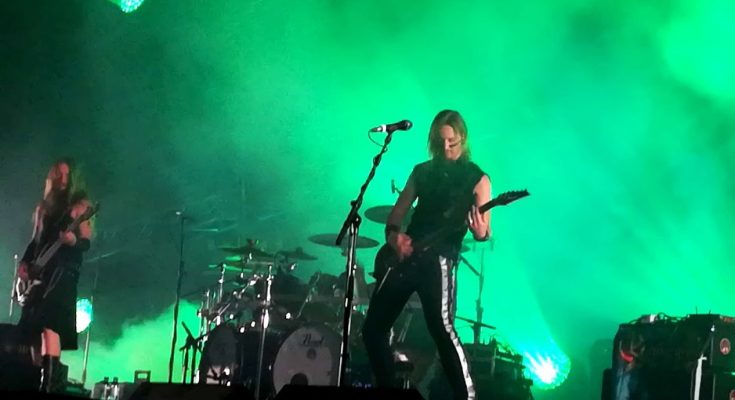 At Hellfest this year, we got the chance to have a short conversation with Sami Hinkka from Ensiferium about the festival. 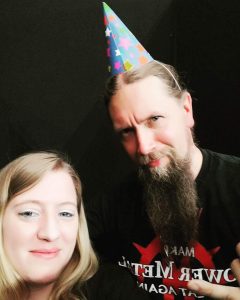 Hi Sami, how are you?

Very good, I am already here from Thursday. I’m happy to be here! I’m just like the other festival tourists enjoying bands, good music, good food and good atmosphere here with a couple of friends.

It’s very nice to see the other side of a festival. Normally when we come here to play you are tired of playing at other festivals the days before. You have to set up everything, unload, you still try to talk to other people and see one band, then we have to perform live on stage and then you have to clean up and rush to go to the next gig or festival. Now, I am relaxing and enjoying the sun and on Sunday I’m ready to play live here. And Hellfest is really amazing!

What is so great about Hellfest? You go to a lot of different festivals, why did you choose this festival to enjoy yourself?

First and foremost, I love France, I could actually live here. The atmosphere and decoration of the Hellfest is fantastic and the line-up was great this year.

Which bands have you seen already?

Judas Priest, a little bit of Napalm Death. Unfortunately, these 2 fell at the same time. Steven Wilson, Europe and Hollywood Vampires,… French friends took me to see ‘Svinkels’, a kind of French Hip-Hop, rap, metal band. I did not understand a word because he rapped in French, but it was very nice to hear, I liked it.

Do you sometimes use inspiration to write songs yourself if you have discovered something unexpected, but really like it?

Not with Ensiferum because we follow a specific style, but I can experiment with other sounds, instruments and vocal styles in another projects in which I am involved like for example ‘Rapture’ a melodic death/doom metal band.

In 2015 we also interviewed you here at Hellfest. You gave us a nice idea: metal karaoke. We have been organizing it a few times a year now and it is very nice to do with our members. That’s why we want to thank you again for the idea!

Oh yes, I remember. Nice to hear that you used it. Maybe someday I’ll come along to participate, who knows (big smile).

I have been following Ensiferum for years now, when I was 16 years old, I presented a lecture (school assignment) about your genre to my non-metal or rock fellow students at school. As an example, I let LAI LAI HEI play from the album Iron, they were pleasantly surprised.

Wow, I am honoured. It’s also a special song to make people listen to who do not know the genre, there are many different rhythms in that song. Good choice!

Are you playing LAI LAI HEI on Sunday or are they all songs from the last album Two Paths?

Do you sometimes receive messages or letters from fans that want to thank you for the music or a song you have made?

Yes, we get sometimes emails. Me as an artist, I always feel honoured and humble when someone is touched by our music. But at the same time it is something that I do not yet fully understand well, but as an artist I try (if it was really fantastic) to let other bands also know that I enjoyed it. I am also a fanboy of Iron Maiden for example. It sucks that we play at the same time here on Sunday.

I actually got a message last week from an artist who would like to move to Finland and he asked for tips. I get such messages occasionally, I always try to answer them as honestly as possible.

Finland is an expensive country to move to and there are not many opportunities to perform live in my own country. If you want to make an international career, then you should consider whether Finland is the right choice as a music artist to move to. Many artists in Finland have a different day job besides making music.

I would have no problem later to move to France to be honest. I love Finland, but I have a special connection with France also and here are more opportunities and gigs possible.

There is a big metal scene in Finland, but very few festivals like here in Belgium, France or Germany. Do you often play in your own country?

We play a maximum of 2 show in our own country each year. The problem in my own country is that a lot of metal bands arise and try to make it, but they are not well received by our own people. You really have to go abroad to reach your target audience.

Do you think this will ever change in your country?

Hopefully, but personally I do not mind at the moment. I have the opportunity to often travel abroad now. I like to travel.

Do you have a ritual before going on stage?

No, not really a ritual or routine, but I like absolute silence before I go on stage. Then I go to the other band members and then we talk bullshit to each other and we warm up.

When I walk on the stage, then only that moment counts, all other stuff and problems no longer count, you do not have to think about it, the moment counts and that’s why I like to play live music.

Does Ensiferum have concrete ideas for a new album?

Yes, we already have a lot of material and after the festival season we go back to the studio again to rehearse and record.

Thank you for the interview!

Fun fact: During the performance, Petri Lindroos jumped into the crowd, in the meantime there were a lot of crowdsurfers in the front, and the guitarist was wrongly sidelined by the security as one of the crowdsufer. It can happen to anyone? But in our opinion they do not carry a guitar, fortunately he was left on the stage to continue playing! 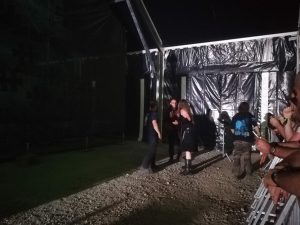 Click on the video to check out the great atmosphere during their show! 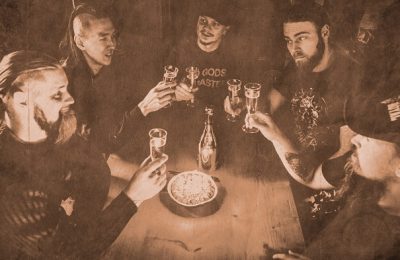