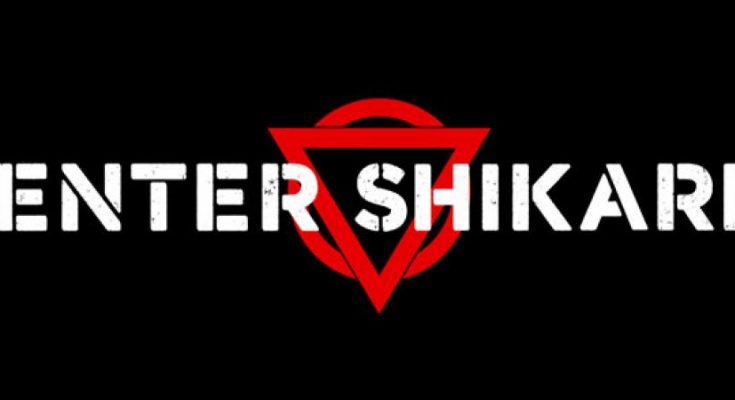 January 2013 – just after releasing their third album ‘A Flash Flood Of Colour‘ – Enter Shikari hit Muziek-O-Droom while touring as support for Cancer Bats. Although already being pretty well known for several years with hits like ‘Mothership’ and ‘Juggernaut’ it was the first time I’d seen them perform and I must admit I was immediately sold. Six years later Enter Shikari landed in Ancienne Belgique again with support from As It Is, another pleasant surprise.

I must be honest: I didn’t know As It Is before I left for Brussels and on top of that I’ve never been a real fan of the emo genre. And at first glance essentially that’s what As It Is is, an emo band. For example: vocalist Patty Walters walked on stage in a pretty typical (not to say cliché) black outfit with red accents. In this case a black suit and shoes with red shirt and socks and a black tie. To finish it all of he wore some black make up which combined with his pale skin tone and outfit resulted in a pretty cool effect. I had an instant My Chemical Romance vibe.

Despite not being a fan and being a wee bit sceptical I got sucked into their story almost immediately. Apparently As It Is has a pretty big fan base in Belgium and we got caught in between the huge amounts of energy that downright exploded on stage as well as the crowd. I also experienced a little haha-moment when Patty said: “Hello Brussels, we are a band called My Chemical Romance! Just kidding, we’re As It Is!”. I liked how he mentioned it himself and with that showed that he knew and just didn’t give a fuck. Nice one Patty!

After watching and listening to As It Is for a while I started noticing that their songs were actually a bit more layered than what I’m used to of emo bands and Patty Walters is actually a pretty decent singer. With their sound and (pretty limited) show they had the crowd eating out of their hand from the first song. And did an awesome job warming up the crowd for Enter Shikari.

Enter Shikari has always been a band that isn’t afraid to explore new horizons. They mix and match styles and genres and the result can be quite different from time to time. And as we all know change sparks opinions like “They’ve gone soft” or “They used to be great and now they suck” or the other way around. I myself am a big fan of the older work like Mothership, Juggernaut, System // Meltdown, Gandhi Mate Gandhi, … It’s not that I don’t like their new work. I just liked the older work better. However – apart from personal taste an preference – Enter Shikari has always proven to be a combination of diverse and competent musicians with the balls to try new stuff at the risk of losing fans and crashing.

The very first big difference I noticed between now and the last time I saw them back in 2013 was the dress style. Back in the days they didn’t give two cent about how they looked and got on stage in plaid shirts, jeans and T-shirts, beanies, … Now they perform in suits and play colour matched instruments. I must admit I had to adjust to that maybe more than to their musical choices. Not that there’s anything wrong with that of course.

I did miss all the things that made me fall in love with Enter Shikari in the first place. The hardcore parts alternating with heavy drum ‘n’ bass sequences. Roughton screaming “Walk the plank!” in the Mothership break down. Mixing up songs into 10 minute mash ups like System // Meltdown. The heavy synths interweaved throughout the whole set. All these things seem to be reduced to mere gimmicks, but they still do a bit of it, probably to pleasure the old fans.

Now despite all the negative stuff I wrote down here this absolutely wasn’t a bad gig. On the contrary! Roughton actually touched the subject himself when he said: “We know we’re not the easiest band to follow or to keep following, but we want to thank all the fans (old and new) for doing so…“. the band does acknowledge changing a lot and by that making it hard on the fans. It’s not a surprise to them that the heavy post-hardcore and DnB fans dislike the acoustic ballads and vice versa and they realize that.

Enters Shikari does manage to deliver a great product time and time again and win over new fans with it. I honestly believe that over time the fan base has changed just as much as the band has. And above all Rou, Rob, Liam and Chris do and have always done what they love: Create and share awesome music, regardless of the general opinion(s).

Make sure to check out all photos at
https://www.grimmgent.com/enter-shikari-(ancienne-belgique,-brussels)—17-04-2019-photo