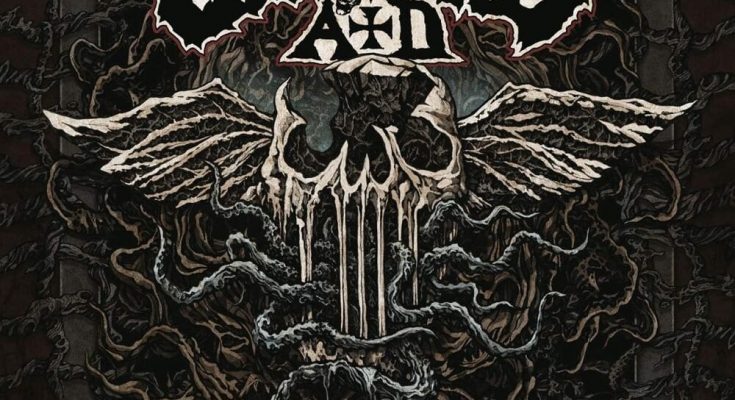 When the former members of Entombed split up after years of stagnation and inactivity they initiated a new band known as Entombed A.D.  Since their resurrection, the Swedish death metal quartet released two albums. The band is now back with their third album with a lineup consisting of vocalist L-G Petrov, drummer Olle Dahlstedt, Nico Elgstrand and Guilherme Miranda on guitars. Their latest release, ‘Bowels of Earth‘, sheds light upon the early sound of Entombed. The propelling force of HM-2 guitar tone that holds the signature sound of the classic Swedish death metal style is once again reinforced. On ‘Bowels of Earth‘ the band assertively pursues this type of riffing, and believe me when I tell you they sound nasty and aggressive.

Although it’s cliché to say that the band’s latest output sounds old and new at the same time, ‘Bowels of Earth‘ is Entombed A.D.‘s best album since they started five years ago. Perhaps the return to a heavier and cruel sound is what the band lacked in their previous albums. It won’t take long to perceive the heavy buzzing tone of the classic album ‘Left Hand Path’, and ‘Clandestine’. The opening track ‘Torment Remains‘ represents qualitative tremolo picking that will please the old fans and the new ones. It’s undeniable that Entombed (among others such as Dismember) molded the standards of the Swedish death metal style.

Entombed A.D. preserve these notions. Their inclination towards a groovier sound and occasional blast beats are moderately featured on the second track ‘Elimination‘. Surprisingly, the guitar tone on the album is overpowered and it seems that the band has adjusted it for the better. While the previous albums seemed to have average songwriting effort, the songs on the new album are considerably more extreme and heavier.

‘Hell Is My Home‘ focuses on down-tuned guitars and groove. L-G Petrov‘s growling style on the album is a bit similar to the ‘Clandestine’ album. The muffling guitar and drums bombardment are subdued by short guitar solos. This record isn’t about old school inspiration. The members are veterans in this field since the nineties, so Entombed A.D.‘s musical expertise is more than mere swagger. The band continues to impress with tracks like ‘Bowels of Earth‘, the melodic intro of which is quite hypnotizing right before its sudden burst into mighty riffs.

The album is remarkably catchy and powerful, and shows off the vocal prowess of L-G Petrov. Melodies are beautifully and fluently performed, and the solos which are handled by Nico Elgstrand and Guilherme Miranda are nicely implemented. The rock’n’roll elements on ‘Bourbon Nightmare‘ show creativity on the old school squad’s part! And the lightning solos of classic rock add an extra catchy note to this rocking song.

The album is driven by powerful riffs as is apparent on ‘Fit for a King‘. It shows the true roots of the Swedish quartet, from d-beat to the guitar tone of Dismember. Since the ability to achieve such quality requires a wide experience, chunky riffs and barbaric growls flow unsurprisingly well on this track, Entombed A.D. stick to their principles, using elements from rock’n’roll, thrash and death metal. Beside the amplified guitars, the bass sound is displayed clearly and the drums are played loud. Guitars on ‘Worlds Apart’ are once again provided with great speed. The next track ‘Through the Eyes of the Gods’, with its vicious guitar lines, has this menacing chorus and the focus here to create an evil atmosphere. An excellent song!

‘Bowels of Earth‘ is a classic crossover of Entombed albums from the ‘Wolverine Blues‘ era. The final track ‘To Eternal Night‘ includes some fantastic guitar riffs. The sudden shift in a slower tempo is notable. The change to atmospheric melodies and darker musical tone is quite astonishing. With ‘Bowels of Earth’ spans for 36 minutes and it includes 10 tracks of solid death’n’rol, and. Entombed A.D. continue to bring new elements to their music. This latest album truly highlights their musical expansion.