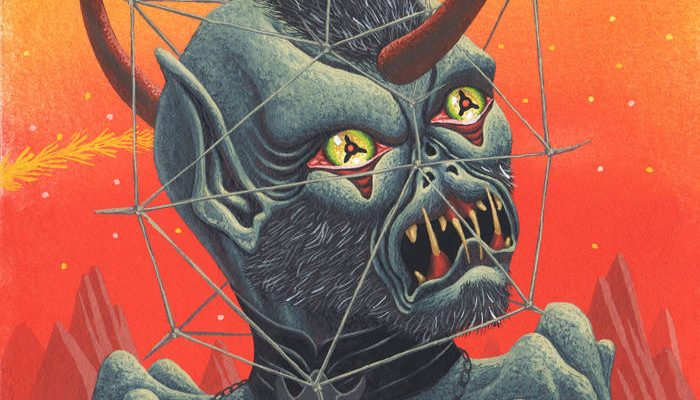 For the past four years now, the French multi-musician Asthâghul has been writing new material continuously. His recent musical works prove that through the medium of occult and mysticism there is no end to creativity. Esoctrilihum‘s first album Mystic Echoes from a Funeral Dimension was debuted in 2017 and was deeply influenced by symphonic black metal. A year later Asthâghul interlaced the elements of death and black metal as he took his writing style to another level. Where he released his sophomore album Pandaemorthium through I, Voidhanger Records. He’s been releasing at least 1 album every year since. Recently the French sorcerer wields his uncanny magic and brings forth the fifth album aptly titled Eternity of Shaog. Asthâghul has brought more sophisticated and subtle melodies to his compositions since his fourth release and on the newest album includes many orchestral elements and different instruments.

Eternity of Shaog opens with a binding symphony dominated by dense guitar riffs and high pitched vocals. The texture is coated with layers of synth that create darker shades. The thrilling vibes are triggered by the swell of heavy guitars and hypnotic melodies. Orthal is filled by beautiful musical sequences which lead to the second track Exh-Enî Söph (1st Passage: Exiled from Sanity), as it builds on multi-dimensional soundscapes of rich atmospherics and luxurious synth work. There’s no limit that can be set to the musical enchantment Asthâghul has been perfecting his sonic alchemy on his prior releases.

Thritônh (2nd Passage: The Color of Death) is an exotic blend of bizarre instruments where the rhythm guitar provides thick layers. While the sudden upheaval of blastbeats adds the cataclysmic effect, it’s clear that Asthâghul concentrates on exploring different dimensions. The widespread of the violin pitch and demonic growls are paired to create an ominous orchestra. Fourth track Aylowenn Aela (3rd Passage: The Undying Citadel) for instance features disharmonious violin passages. The song structure is dominated by harsh violin which is profusely used as a foundational element. Asthâghul‘s musical abilities on his latest craft are expanded to new levels where he conveys his experience from the occult realms.

From the solo violin and the high pitch guitar arrangements, the fifth track Shtg (4th Passage: Frozen Soul) is brought by emotional and melodious piano arrangements. This beautiful and haunting instrumental track segues into lush atmospheric depths of black metal. The sprawling tone of the tremolo pickings and haunting sound of the synth are both interlaced. The rhythm guitar is eloquently crafted on the sixth track Amnthlys (5th Passage: Through the Yth-Whtu Seal). It is triggered by storming blastbeats and violent tremolo riffs that penetrate the delicate layers of texture. While the dense guitar layers are compacted like a solid mass, the catalytic double bass provides a balance to this blackened crescendo. Asthâghul has taken a different approach throughout the album, showcasing fine musical qualities resulting in a more atmospheric sound compared to the previous albums.

Shayr-Thàs (6th Passage: Walk the Oracular Way) begins with ceremonial spoken words and the mastery of the atmospheric style of majestic black metal is displayed with such splendor. Asthâghul weaves the uncanny forms of death and black metal as he offers a high quality of guitar chugs and double-bass. The ritualistic delivery gets darker and it seems that the album is entirely emphasis the atmospheric innovation. Many of these instruments have ethnic and Eastern values and the grand opening of the eighth track Namhera (7th Passage: Blasphemy of Ephereàs) will blow you away with its beautiful textures.

Title track Eternity of Shaog suddenly verges towards raw black metal where the rattling percussion gives a crude feel. Despite the frequent change from atmospheric black metal to blackened thrash metal, it doesn’t really serve the track that much. Monotony of a Putrid Life in the Eternal Nothingness transcends to the orchestral heights where I like how the bass guitar creates these pulsing effects. The subtle solos are added to create a more ambient feel, the arrangement of the paired tremolo pickings and the growing ambiance makes this epic track memorable. Asthâghul once again delivers an impressive take on atmospheric black as he folds another chapter of his musical complexity.