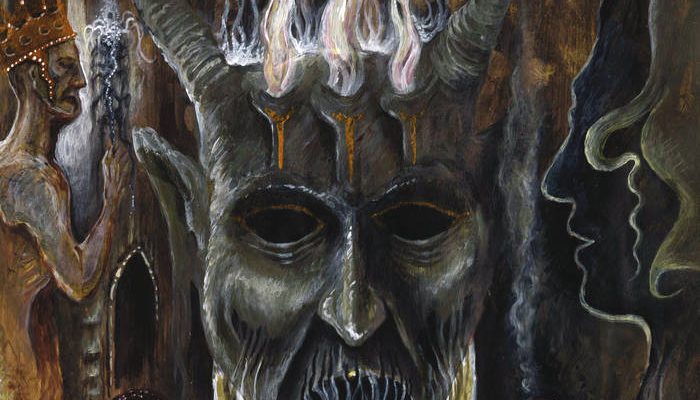 Esoctrilihum happens to be one those bands that have bewitched me with their second outing. This band that conjures a twisted odyssey of musical experimentation has struck me with its bizarre and creepy soundscapes. Esoctrilihum is an esoteric black metal band helmed by Asthâghul, the sophomore release of Pandaemorthium came months after the symphonic ambient black metal album Mystic Echo from a Funeral Dimension. The album opens with an ambient intro, the thematic elements and the track titles, including the cover art are influenced by H.P. Lovecraft. Esoctrilihum’s aesthetics are drowned out from the abysmal darkness, as there are many elements that have been implemented on this prolonged album. The atmosphere is quite foreboding, Rotting way of Damnation, and Abyssus Caliginum are bizarrely twisted with dark passages and obscurity. The ambient atmosphere is spectacularly implemented to enhance the dark soundscapes. The vocal tones are different on each track, ranging from hissing whispers, to grim growls or high pitched vocals. Esoctrilihum influences are varied from atmospheric black metal to death metal, Lord of the Closed Eyes is encompassed with peculiar aura, the tremolo guitar is brilliantly saturated within the tumultuous drumming. Yet it’s all dark and abysmal and it feels somewhat like an alien invasion which has been summoned by forbidden spells.

Breath of the Silent Shape broods with gloomy sense of darkness, the three minutes instrumental track is very catchy. With Prison of Flesh, the synthetic sections are textured with tremolo riffs and grim vocals that sounds a bit distant, the drums are often rattling from mid tempo to up tempo. Pandaemorthium is a mystic dark force of anti-cosmic beings, that are inspired by H.P. Lovecraft work of myths. Nocturle Ars Fh’a is conjured by the spellbinding talents of Asthâghul, where each minute of this track captures a mysterious atmosphere of occultism and darkness. The spectral growls and the heavy riffage along with the hypnotic melodies are applied with sublime art.

The album includes eleven tracks and clocks at one full hour and 8 minutes, brimmed with many ideas and directions. The instrumentation is utilized superbly and this is what makes Pandaemorthium more mature compared to the debut album. Another fact is the production which enhances the overall sound. The sophomore release requires a careful listen due to the long duration of the tracks, the album also includes two intro’s dividing the album into two parts. I personally think the album has a genuine mixture of death/black metal. The quality of lush atmospheres are weaved splendidly and they are the main strength of this album. Asthâghul worked hard on this album but I believe the duration of the album is quite long. I think it would have been a perfect record if the tracks were shortened a bit, but releasing two albums in a short gap deserves a reward for the hard work nontheless.

Most of the tracks contain catchy riffs and haunted melodies beside the overwhelming hypnotics which makes them more interesting and enjoyable. The Holocaust of Fire in the Temple Of The Red Oracle sounds close to early Beherit and it exemplifies what Esoctrilihum is capable of, the raw black metal pummeling and blast beats are utilized with perfection. Shaog Og Magthoth is demonstrated with sharp tremolo riffing, the low harsh growls are inlaid with the guitar work which is truly excellent, the symphonic elements and the intersecting melodies are abundant here. Pandaemorthium is an exceptional monument of innovation, and Esoctrilihum has crafted an avant-garde album of a twisted dark vibe of cosmic black metal, this is a perfect soundtrack to your everlasting nightmares.

Release date : February 23rd, 2018
Label : I, Voidhanger Records
Tracklist :
1.(Open the Gate to unknown Path to ) The Metamorphosis Descent
2.Rotting Way of Damnation
3.Abyssus Caliginum
4.Lord of the Closed Eyes
5.Breath of the Silent Shape
6.Prison of Flesh
7.Nocturle Ars Fh’a
8.Sepulcrum Miseriæ
9.The Holocaust of Fire in the Temple of the Red Oracle
10.Shaôg Ög Magthôth
11.The Last Judgment