On October 14th and 15th, the tenth edition of Evil or Die Fest took place in Roeselare, Belgium. This small festival has been around every year almost unnoticed. Which is a big surprise when you look at the bill they managed to gather. Friday the stage and crowd got invaded and held captive by an impressive line-up of hardcore bands like Fallbrawl, Surge of Fury, Stab, Balboa, Headshot and In Clover. I'm sure the venue trembled on its fundations, a pity we couldn't be there!

On Saturday another spectrum of the heavy music industry showcased -mainly local and Belgian- talents in thrash, progressive, groove, death and industrial metal. Thanks to heavy promotion (kuddos to Hardlife Promotion) and a rock solid line-up on the second day as well, the organizers have been able to have "sold out" for the first time in their history... congrats!

When I arrived at the venue, I was greeted by a tent with merch stands on the one side and a food- and coffee stand on the other side with a great selection of everything. To get in and out of the place they had the great system of using the left double doors as entrance, the right double doors as exit, causing a good flow. The only remark I might have here, is that often the area in front of the doors were so crowded with smokers that it felt a bit like a dam holding the stream from moving in the right way. Once I got in I was impressed with the rather cool stage they built inside of the sizeable hall. Bar in the back and a place to leave your coat if you wanted, it really looked like they had thought of everything and are experienced in the trade. 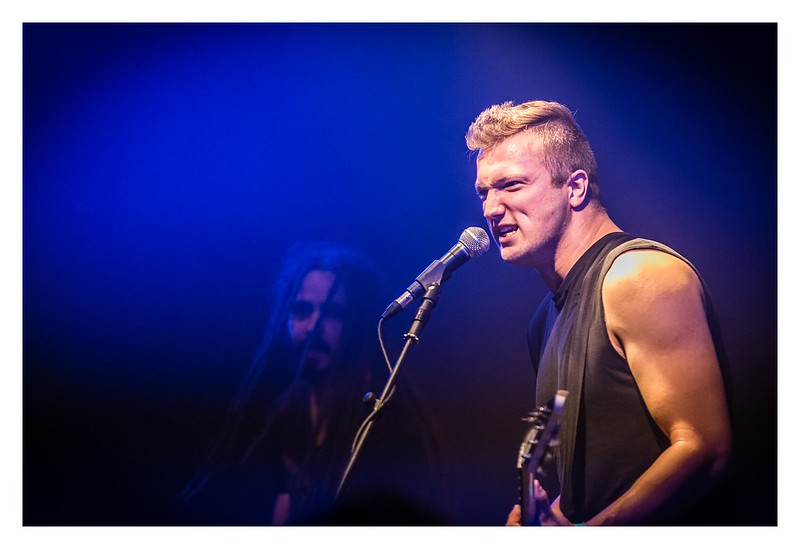 I only arrived about halfway the event, having missed Lethal Injury, Psychogeneration, Turbowarrior of Steel, The Curse of Millhaven and Guilty As Charged but just in time to catch the show of Dyscordia. The band is one of the rising suns of the Belgian metal scene and I can't imagine that other countries won't pick up on them soon. They bring a mix of heavy, thrash and progressive metal that can sound pretty epic. The musicians clearly are masters of their gear, cranking out progressive riffs and guitar solos, trembling bass lines and thundering drums, all combined in a great sound brimming with melody and power. To top it off, vocalist Piet Overstijns has a great set of lungs that reminds me of Bruce Dickinson (Iron Maiden) from time to time. He really brings a bit of magic to the stage. Personally I don't know enough of their music to recognize the songs, but I was told by someone more knowledgeable that it was a damn great setlist! There were definitely enough fans present, 'cause I heard a lot of singing along happening. Too bad the sound wasn't always the greatest. But still a great show of a band I got more interested in now. If you want to check out more of Dyscordia, go read our (Dutch) review of their latest album here. After the show all of the guys came out to the merch tent to say hi to the throngs of fans that wanted to get stuff signed by them or have a chat, always great to see artists making time for their fans... 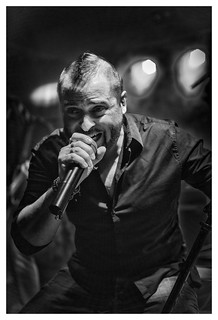 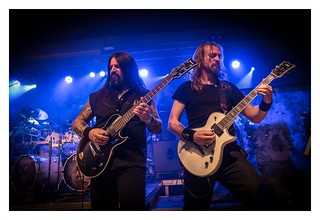 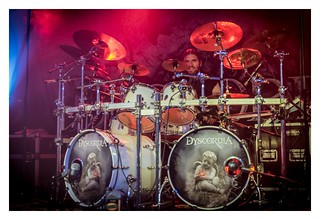 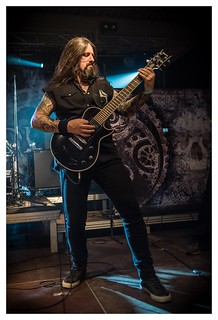 Next up were the Belgian thrash metal veterans of After All. The band has been around since the early nineties, relentlessly thrashing around while finding their own sound. I had been looking forward to their show to see if they really are as impressive as I remembered them (as support of Destruction and Overkill in 2011). And they didn't disappoint one bit! From first to last note they blitzkrieged right over the festival... The decades of touring and playing together formed a highly skilled band that plays its technical thrash with apparent ease. They're hard, fast and relentless, but still didn't forget about putting in a good dose of melody. On top of that with Sammy Peleman you get vocals that blow your mind and are crazy versatile. The addition of Sammy on vocals lifted the music's level to new heights with a range going from high pitched "Rob Halford" lines to shouted thrash vocals to actual growls. The fact that he's a very present frontman who gets the crowd riled up and obviously loves to be on stage only makes the experience better. Too bad the band recently announced that they're going to part ways with Sammy. They anyway put a show down to remember them by whatever their future plans are! 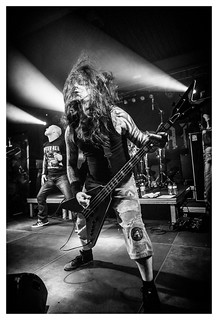 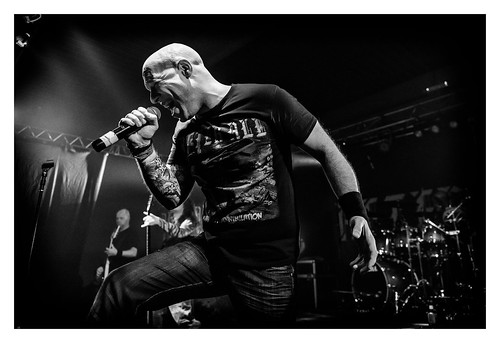 If you thought the place couldn't get destroyed even more, then you didn't count on Spoil Engine... Lead on stage by their beauty on the mic, Iris Goessens, they simply obliterated any doubts away. The show was yet again incredibly energetic, heavy and tight. The addition of Iris really gave the band a second life, and what a life! Her vocals ranging from sweet and melodic to growling like a beast are downright impressive. On top of that there wasn't a moment that she stood still, she ran around on stage from side to side, coming up closer to us, jumping, headbanging,... Together with the talented band backing her, they pushed the crowd into one after the other moshpit and walls of death. The room exploded when Iris asked for our middle fingers raised and shout along to the "fuck you" in Disconnect from their Stormsleeper EP (for our Dutch review go here). We got a little taste of what's coming with their new album by a new song that sounds like more! We at GRIMM can't wait to get to listen to the full release once it's completed... 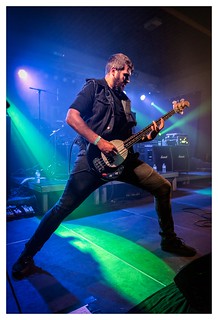 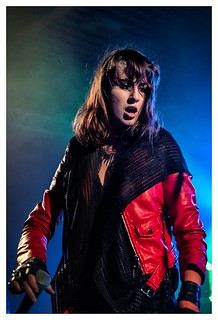 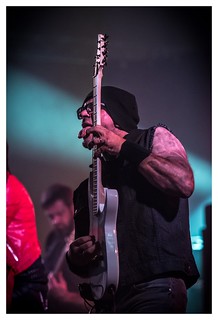 And last but definitely not least: the Dutch black/death inspired thrashers of Legion of the Damned! The people who were at Graspop Metal Meeting this year got to enjoy the massively heavy show they throw at you already. At Evil or Die Fest they played their debut album Malevolent Rapture completely as a reminder of their ten years of existence as Legion of the Damned. What After All and Spoil Engine had still left whole, they picked up and blasted it to smithereens... The gig was a celebration of death and destruction. The photographers present were not happy with the massive light show, causing getting a decent picture near impossible. But the crowd -what was left of it- enjoyed the gig the more. I don't know if it was because of the quite big delay in the schedule or if Spoil Engine simply sucked the life out of the people at Evil or Die Fest, but the venue was way too empty for a band of this magnitude! The guys didn't let that hold them back luckily. A good side of the small amount of people left for Legion of the Damned, is that a big chunk of them were big fans who shouted and sang along to some of their "hits", like Sons of the Jackal. A really strong set by a band that has convinced me of their power, though I would've loved to hear some more recent songs of them too (that I know better). I should mention that thanks to their personal sound guy, the headlining gig had the best sound of the day, which was awesome. Anyway, up to another ten years of mayhem and damnation! 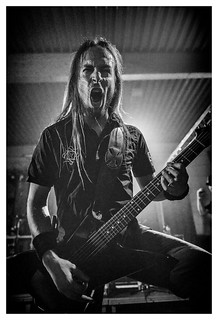 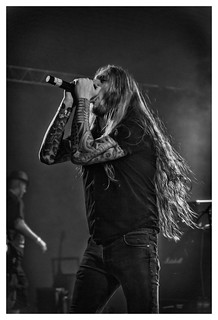 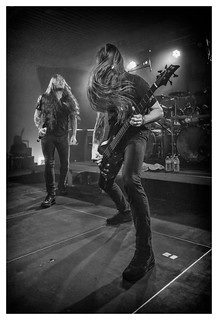 Discovering this little gem of a festival was great, I can't wait to see what the line-up will be like for next year's edition... Just keep the sound in mind a bit more next time maybe, it regularly lacked something... But thank you for another event that seems to be there to support our local scene and keep it alive! See you hopefully next year!

If you want more pictures by our photographer Tomy, go check out our photo coverage here!