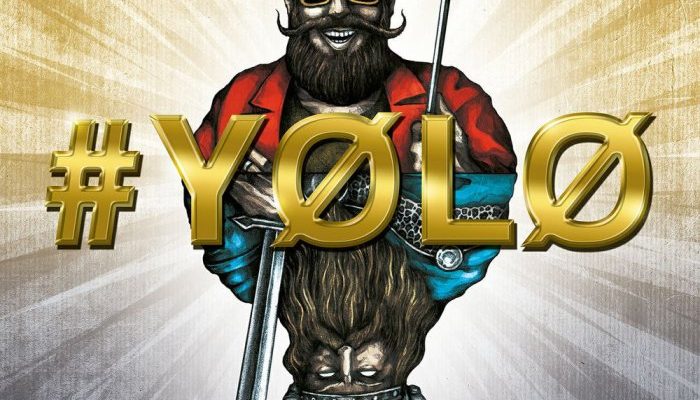 German Finsterforst is a folk/pagan metal band that have left their mark on the more extreme folk metal with their last record Mach Dich Frei. Some even said that they basically could push Moonsorrow from the throne now. It seems like the fun-loving dudes thought that it was a perfect time then to show that they don’t always have to be so serious. Hence in front of you the #YOLO EP, an album title I would’ve never expected from these dudes… The title in combination with the cover art made me get ready to be either amazed or annoyed. I was really hoping I wouldn’t lose faith in this awesome band.

I can only give you one advice: don’t take this release too serious. The guys clearly wanted to have some fun and bring you their happier party side. This is what they had to say about this “out-of-place” record:

“We thought you only live once and finally recorded the EP we have always wanted but never dared. At last we have songs for the dancing metal fan. Check the batteries in your ghetto blasters, you wanna hear this loud and party in the streets!”

And right from opening song Bottle Gods they crack open a can of pure folk metal fun for us. The song could be just as well on a record by Ensiferum, Trollfest or a similar band, with happy tunes, a chorus to chant along to, but still enough harshness to it. Auf die Zwölf picks up the black metal influences they’ve had in the past to back up a bit. The song is very heavy and harsh, but somehow it still fits in perfectly as a “party song” with a chorus you can shout along with. Also check out their crazy video clip that belongs to this track.

#YØLØ gets a hefty pouring of balkan music which is never a bad thing in my opinion. With Hangover they go back to the more folky metal, singing about the troubles overconsumation of alcohol can bring. It’s almost a sad song, but the combined voices of the members singing gives it a very epic, almost festive vibe after all.

Then there’s the point where some metalheads could possibly run away: the first covers… Wrecking Ball from Miley Cyrus is up first and has become a song I’ve been looking forward to when listening to the EP. It reminds me of what Russkaja did with for instance Roar by Katy Perry, only more metal than acoustic. Second weird one in the list is Beat It by Michael Jackson that at first makes you believe you’re getting a dubstep thing served up. But no worries, it soon switched to the actual cover which is in essence already a great guitar track.

Closing down the album we get a trio of tracks in their mother tongue: German. I think they went to look through what they listen at for a party and noticed they didn’t have hip hop, country and punk yet. So here they are: Der durch die Scheibeboxxxer is a cover from the wacky German hip hop artist K.I.Z. and Flasche leer gives you some whistling and atmospheric country folk. Das schlimmste ist, wenn da Bier alle ist (The worst thing is, when the beer is gone) delivers the punk and the party at the same time. You should definitely check out the old-time German punkers of Die Kassierer, they’re awesome! Last song is the classic Wild Rover. There’s a more old fashioned approach to the way they sing it, which is kind of nice. Though personally I still prefer the version with more “oomph” by the Dropkick Murphys.

I was really scared that Finsterforst was going to fuck up their reputation with #YOLO. But I actually got to enjoy this record really much. It’s definitely an unexpected little sidestep of these great artists, but it was great fun and the record is packing enough of their well known epicness to be happy! Beers raised and singing along to a 8/10.