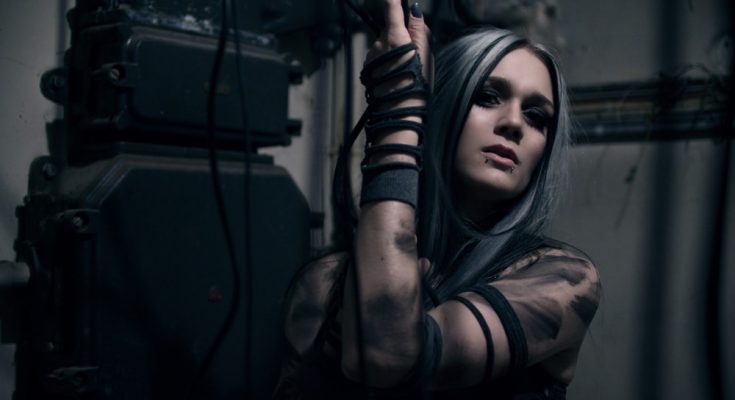 We noticed that one of the support bands on Children of Bodom‘s anniversary tour was the newly Nuclear Blast signed heavy rock/metal outfit Forever Still from Denmark. They seemed a bit out of place between the other more heavy bands and that sparked our interest. After looking up some more about them and liking their music and their attitude towards their fans, we really wanted to have a talk with these guys to give them some support. Our photographer Patty and me arrived at The Circus in Helsinki and after a long search for a decent spot in the corner of the bar to settle down and sit, we had a really nice talk with singer and front woman Maja Shining…

Nice to meet you! So, today is the last stop of the tour, how are you?
It is… I’m good! I mean, we do a lot ourselves, like the driving and everything, but we just took a ferry all the way to Helsinki. So we got a good night’s sleep… (laughs)

… ’cause I know that at the end of a tour things can get a bit tiring…
Yeah yeah, I can sense that some people maybe are a bit on edge. But overall, most people seem to be in a good mood and my experience is that it surely comes down to a good night’s sleep.

And especially for you as the singer I guess that good night’s sleep is quite important!
Definitely! I do my best… like when I’m not driving the car, I’m basically sleeping most of the time. So yeah, when we get back to the hotel it’s usually like 1 a.m. and if we have a long drive we get up at 6 a.m., so we get worn out…

You’ve been touring now with Children of Bodom and I was kind of surprised to see you guys as support. ‘Cause your music is quite a bit less heavy than theirs… So I was wondering how that opportunity came to be and how the crowd has been reacting at the shows…
Yeah, we had the same thoughts as well… obviously we said yes to the tour when our booker brought it up: it was an awesome tour, cool band… And my thought was that despite Children of Bodom being a lot more heavy, they have so many melodic elements in the music that people who are there for that will also like what we do as well. And that’s been the general experience we’ve had. We’ve had a very good vibe with the crowd. Obviously there’s will be a metalhead here and there who is like “this is not cool at all!”, but that’s going to happen at every show.

That’s cool! Your tour with Lacuna Coil some time ago was sort of more fitting then for you guys…
Indeed, that was very fitting. But there are only that many hard rock/metal bands with female vocals, so you kinda ran out pretty quickly. (laughs) We’ve been really happy with the tour and the response now!

Now, recently you’ve been signed by Nuclear Blast. How does it feel to suddenly go from a completely “DIY” band to being part of such a big label?
Well, it’s cool! Obviously, we did a lot of work ourselves before and maybe people think when you get signed to a big label that all stops. But Nuclear Blast loved all the things we did: our photos and our videos and our recordings and everything. So they just wanted us to continue that and just boost what we were already doing. So for us it hasn’t been much of a change in the aspect of what we do, ’cause we’re still very much a DIY band. Now we just have a label that can promote it to the bigger audience that I think it deserves.

Well, that’s really cool for you guys! I actually only heard of you guys after Nuclear Blast signed you, so it’s definitely working! After checking out your music, I had the impression their very emotional overall. So I’m wondering: where do you get the inspiration for the lyrics and such?
Yeah, it definitely all comes from inside. It’s all stuff I’ve felt or experienced. And that’s the kind of music we wanted to make when we started out: just very honest and emotional music. So that’s what it’s all about.

You’ve only last year released your debut album Tied Down, so any nearby future plans now after this tour?
Oh, absolutely! I mean, when we come home we’re going to continue working on our next record. We’re also still going to keep the ball rolling for Tied Down: maybe make a few acoustic versions of songs, some new music videos,… And we did started writing already for our next album even before we got confirmed for this tour, so that is already going. And we plan to have it out early next year!

That sounds exciting! So you already got to tour with Lacuna Coil now that really seemed to fit you, would there be any other bands or artists that you look up to that you’d love to tour with?
Oooh, many! I think many would be really cool! Euhm… I think Deftones would be a friggin’ cool band to tour with or collab with, that would be really great. I think Bring Me The Horizon would be cool as well, a more modern band that got more into melodic stuff by now… I know a lot of fans are wishing Nightwish as well, so obviously that’s a big one and we’re not going to say no to that either! (laughs)

I can imagine you won’t say no to that! I’m curious now, I think it’s amazing to see a woman in a band, you know. Do you feel that there are any pressures being in a kind of more male dominant world? As a woman, how do you deal with that? I think it’s amazing and empowering for other girls…
Thank you! And I think it’s super important to have some visible women in heavier music, ’cause I was definitely subconsciously searching for that when I was a kid because I loved singing and such. I was like “where are my girls at?!”, there weren’t a lot of girls there, so I think it’s important. Obviously there are always going to be people who look down on you for whatever reason and I could sense it in some of the audiences that were a bit apprehensive. ‘Cause they expect it to be soft or symphonic or… And I know the boys have gotten some crap like “Hey, what it’s like to be in a girls’ band?”. So they were like “I don’t think it’s any different than being in a boys’ band!”. So yeah, I hope I can inspire younger girls to get going as well. ‘Cause obviously we’re still underdogs in the heavier music, but there really is no reason for that.

Exactly, it’s very empowering for women in the metal music industry, you’re very empowering…
Thank you again! That’s nice, I appreciate that! And I also think it’s really important they get to see women are not just in music to be sex objects. That has been a big issue for me that I feel like a lot of girls are either pressured into dressing a certain way because they think that’s what they want. And I’ve been asked too “can you maybe dress more provocative and sell more records?”… like… “Fuck no!” I definitely can’t do that, I dress the exact way I want to. Of course women should be able to dress however they want, I just want it to be on their own account and not because they feel pressured into doing that.

Exactly, that’s great! I think I got to the end of my questions now, any last words you want to aim at our readers still?
Well, we’re very excited to be in Finland for the very first time since we didn’t hit Finland on the last tour, which was a shame. So even though we have a long drive home, we’re very happy to play here in The Circus which is a really cool venue and it’s sold out too, so I’m sure it’s going to be awesome!

It’s probably going to be quite the party indeed! Thank you and have fun on stage!