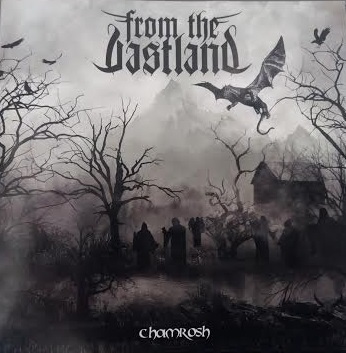 Who is From The Vastland? It started out as a one man project by Sina: he is a composer, guitaris and vocalist. The project’s originated from Trondheim, Norway in 2010. The band did a phoenix-move out of the Iranian black metal band Sorg Innkallelse. For the brand new  album Chamrosh, Sina co-operated with Tjalve who plays the bass and Spektre who strikes the drums. The recording, mixing, mastering and producing were done by Sina himself. From The Vastland signed a new contract with Immortal Frost Productions to release the album.
For more information about Sina or the music, you can click on following link to visit the official website or here for the Facebook page.

Fun facts:
♠The influences for his music are Norwegian Black Metal bands from the early nineties,
♠From The Vastland was nominated for Global Metal Awards (Metal Hammer Golden Gods 2014),
♠The band already had a contract with other labels like Satanath Records (Russia), Non Serviam Records (The Netherlands) and Indie Recordings (Norway).
♠Sina‘s been joined on stage by known musicians like Vegar ‘Vyl‘ Larsen, André ‘Tjalve‘ Kvebek and Thor Anders ‘Destruchtor‘ Myhren.

“History, future in the past…
And I’m walking through the dreamy path of history…Ancient majesty…”
Sina – Source

Now about the album Chamrosh…
Before putting the album in the CD player, I went through the materials. The cover contains a simple design but it’s a beautiful murky piece. When I read the lyrics, there was something interesting about the vocabulary. Many words were used, not even knowing what it actually means. The album has ‘it’s own language’. The idea behind it is clear but it’s not that legible. On the plus size, it makes it mysterious and fun.

With Wizarsh, From The Vastland begins firmly with grunting all over. The song contains a good melodic rhythm. Fast and slow riffs are alternating. The more you listen to it, the more you can appreciate it. The second song, The Malkusan Witch, starts with a wind-like noise, slow instruments in tune with each other and then the heavy voice joins in. Which makes the music fall into heavyness. And what a speed in the drumsticks in Kresaspa & Seven Daevas! An example of the pure black they have in them. About Chamrosh: the song offers a pause but at the same time not really. It’s fast but still gives you time to breath. The fifth Saurva, Demon Of Hunger sounds not that different to Chamrosh. I & My Serpents boosts up the album, the melody sticks in your head. The singing goes perfectly with the instruments and has a rythmic vibe. That is the reason why I choose this song to add to the article down below. The end of the album is near with Mardazma. A lot of variation was used here – for the singing and playing of the instruments.

Overall, the album is quite unique. You can hear that the musician put a lot of effort in his work to make this album happen. The soul of Sina is certainly present. Sometimes I had the feeling all songs are hear-a-likes. The way he used his voice was practically the same (for people not familiar with the genre, the songs could sound very similar). When I read the texts, I was curious about the outcome.  Some phrases are hard to hear, due to a but unclear pronouncing of the lyrics. But maybe that’s the purpose or the singing technique… For fans this will be a good thing – the album lays in the same line of previous work and will most likely fulfill the expectations.