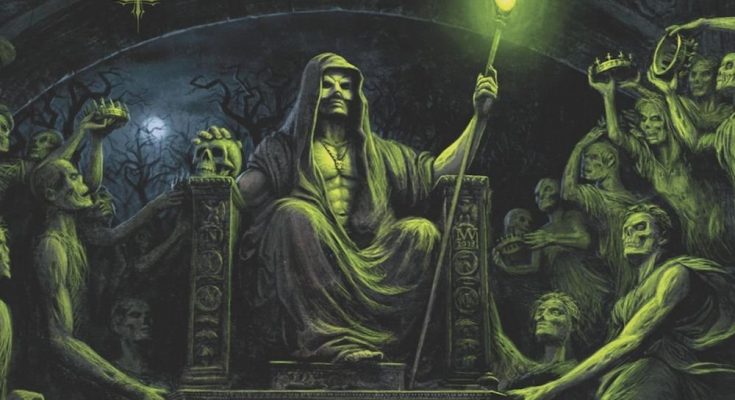 As fans of metal music we have observed the rise of many black metal scenes whether it be from the European continent or elsewhere. When the Scandinavian scene rose to its prestige reputation in the mid 80’s and early 90’s, the Hellenic black metal scene was silently forming from that heritage.. During that period of time bands like Rotting Christ, Varathron, Necromantia and Thou Art Lord were clearly established and became the beacon of the Hellenic metal scene in general. Soon these forefathers laid down the principles which defined this underground genre and were looked at as the representatives of Greek black metal. It was without a doubt a golden era for this genre that brought many bands to fame. And amongst these bands we find tartaric occult black metal portrayals Funeral Storm who have recently released their first album ‘Arcane Mysteries‘.

Funeral Storm emerges from the land of epic tales and oracles where mythological creatures and deities outlined the dark nature of the Greek mythology. This outstanding outfit was formed by Wampyrion Markhor Necrowolf in 2002, previously known under the name Raven Throne, but later changed to Funeral Storm. Earlier between the years 2012-2017 they released three split albums and a compilation. For many reasons I find ‘Arcane Mysteries‘ holds a significant value for being attached to the roots of the origin. The trio consists of the most renowned names in the Greek black metal scene, and brings renowned artists Stefan Necroabyssious on vocals. Wampyrion on drums, bass, keyboards, backing vocals and guitarist Arcania LVI. With this brief introduction we delve into the dark mysteries of mystical spiritualism, and get carried by the palpable occult feel of this stunning record. ‘Arcane Mysteries’ demonstrates and summarizes the principles of Hellenic black metal. The music is mainly conjured from the catchy guitar riffs and powerful rhythm guitars which create a dark and haunting aura on this masterwork.

A brief preface of spoken words and synth describes the magical nature of this debut. When the second track ‘Ego Sum Filius Draconis‘ breaks the silence, it begins with spellbinding guitar riffs which evoke the potency of black metal. Funeral Storm pays a beautiful tribute to bands such as Varathron and Rotting Christ, drawing power and dynamics from the saturated melodies and rhythm guitar. Stefan Necroabyssious‘ grim vocals are catchy as ever. The atmosphere is quite dark and enticing. Funeral Storm‘s song arrangements are brilliantly crafted, and the musical compositions on the third track ‘The Martyr of the Lake‘ is reminiscent of early Rotting Christ. The riffing is based on an epic style where the band concentrates on exhibiting their musical talents.

The debut is a true reversion to the early sound of Greek black metal and it genuinely leans into the classic records of Rotting Christ‘s ‘Thy Might Contract‘ and Varathron’s ‘His Majesty at the Swamp‘. The sublime aura is mainly conjured by the dark and occult sound of the dreamy synth. That flows by the elegant guitar melodies and the rumbling bass that transport you back to the golden age of Hellenic black metal. The guitar is set on a dramatic rhythm of drums, which provide some balance. The fourth track ‘Wandering through the Abyss‘ is an ambient and industrial track centering on electronics. Perhaps a brief interval was necessary to refresh the listener on what’s to come next.

The opening of ‘Necromancer‘, and ‘Necromancer Part II‘ will give you goose bumps when the captivating guitar riffs merge with the dark growls. Funeral Storm are an antique model of black metal, who demonstrate superior talent when it comes to songwriting. Cold and ambiguous synth, which produces an eerie and mystical atmosphere adds more texture to the songs. What make this album so appealing are in large part the beautiful guitar qualities, which are the central instrument that helms the tracks. While the synth work enhances the occult feel, the elegant tremolo pickings and the rhythm portions are profusely implemented.

Album title track “Arcane Mysteries” is professionally performed, way beyond the capability of any standard band. Its atmospheric nature is elicited from the occult art. ‘Origin of Utter Evil‘ resumes with the swirling guitar riffs, menacing growls and sweeping melodies. Funeral Storm’s musical influences are extended towards the simplicity of heavy metal. The trio have crafted a dark and epic debut album, and throughout the nine tracks they revive the raw principles of black metal. The album also includes a cover song of Varathron‘s ‘Flowers of My Youth‘. ‘Arcane Mysteries‘ is a mystical record that pertains to the second wave of 90’s black metal, this is an essential album for fans of Rotting Christ and Varathron!