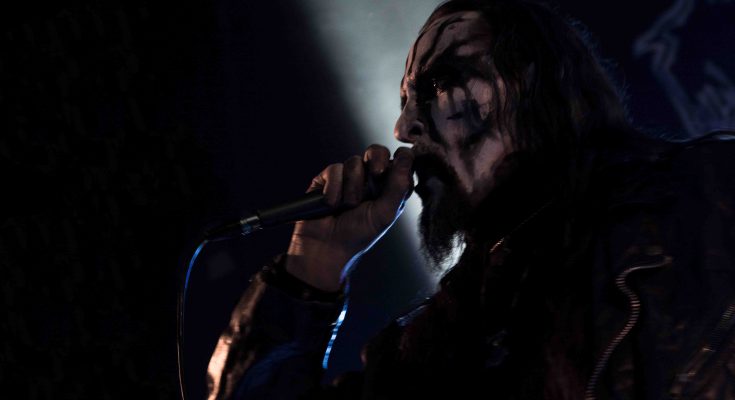 I’ll start with the thing many will immediately think: Satan. Yes, we did an interview with Kristian Eivind Espedal, better known as Gaahl (Gorgoroth, God Seed, Gaahl’s Wyrd,…) at Hard Rock Fest Avelgem 2018. And no, it wasn’t as stiff as the answer I just referred to, at all. He told us a lot of very interesting facts going much beyond a simple word as “Satan”, and it was great! Find out here…

We sit down with Gaahl and he curiously glances at the glass I’m holding.
Is that gueuze?

It’s kriek, cherry beer, (laughs) we have so many beers here.

Yes Belgium is… good at it.

Ok… There’s a good audience and a good energy so I’m feeling better than I expected.

Alright! Because I understand  it was a busy day?

The first time I saw you was with God Seed, front row at Graspop a few years ago, and I was so impressed I had to sit down for 15 minutes or so afterwards, thinking about what happened. What do you think about that, that people can be so moved by your music and performance?

If that’s possible, that’s one of the best reasons to perform it. When I’m in the studio and I want to create it, I basically create it to feed myself. So if that’s something that feeds others that’s great.

That was actually my next question: do you cope with your own emotions through your music and if so: how? Through the writing or performance?

The good thing with music is… I’m very old-fashioned, I don’t write anything down, I keep it all in my head. Also because I believe in the oral universe rather than the written universe. The written universe is somewhat restricted. The oral universe can express emotions way better. And music can easily trigger a memory, but also maintain the direct honesty that you have to give. So I try to fall in to the energy of the song, and since I don’t write the lyrics down, I carry them only in my mind,..

And you can literally feel them.

I understand. And if you want to preserve things orally, how does it make you feel when you make recordings of the songs?

I think that when you record it you are in a very different environment. And you have the energy not on paper or in the room, it’s focused in yourself. So it’s a more secluded universe. I never try to do the album as I perform it live, because there are very different energies. Of course when you do live recordings you get more of that (laughs). Bands do that nowadays but back in the days we just went in, rigged everything up and then played everything and then added the next guitar, because we were never a full band (laughs). It’s different when you kind of create the energy, where the energy is around you. Of course the sound quality will always be lower with live recording, you won’t get as clean a sound. I’d say studio is more of trying to meet the energy, I’m there and will see if it will survive or not when it’s presented as a whole.

But as technology grows, will this be different?

Oh yes, I want songs to evolve and change, because every single day is different. So what I try to do with this band (i.e., Gaahl’s Wyrd) and what I kind of succeeded in, is that we don’t go on stage and do the same set. We change the set every time we play. That helps keeping people in focus and it also helps the honesty and to be present.

Keeping the feeling of the moment?

Yes, if you go on tour and you have 60 gigs after one another, and you go on stage and do the same sets, you become more like a robot, rather than being in the energy of the moment.

Energy-wise, do you have something to load up before you go on stage, like a ritual?

No, just putting on my “face” basically. Of course I try to escape all of the elements that are in the way of performing, like worries or like today long travels. But otherwise I just try to fall into the mood of the show. The ritual in itself is falling, but that goes for everything in almost anything else.

Alright. And coming from Norway and your situation, what do you think about Belgium and the Belgian audience?

I feel like the Belgian audience is more open than a lot of other countries. It seems like they have a bigger acceptance for difference in energies and emotions. So I have a good feeling towards it. It might be that the language has some kind of code to it, the way that the language effects the way you think and allows you to understand different emotions.

The energy in the words themselves, even though you don’t understand them, and it’s an emotional language.

Exactly. I think maybe that’s something that’s kind of the clue, it’s just something I speculated and noticed with what kind of songs are received well when I’m on stage. So for me there’s something more of an awareness and openness to not being repetitive. I’m really pleased with the Belgian audience.

Do you have a final message for your Belgian fans?

No. (laughs)
Well maybe: if in Bergen, come visit my gallery.

We would love to visit someday, we just have to see if our Oldtimer VW van will be able to get there.

Thank you so much!

Thank you and very welcome to Bergen for a visit!