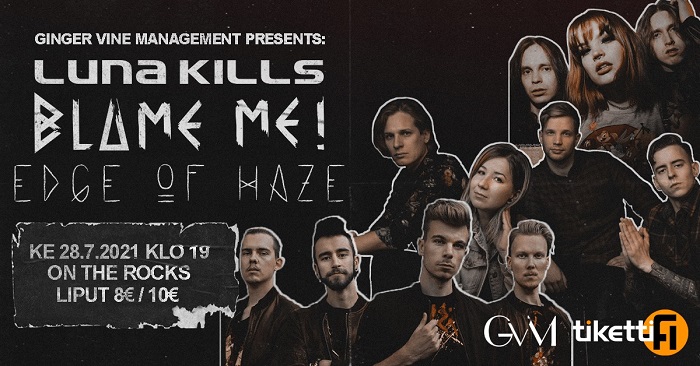 There seems to be something going on in the global rock scene, where there is one after the other band popping up that is brandishing the “alternative rock” tag and bring extremely catchy bangers of songs. The songwriting talent of pop music, combined with a rock attitude that often leans towards an experimental side, is an exciting trend that hopefully will bring rock music back to the charts and get youngsters excited about rock ‘n’ roll. The metal country of the world, Finland, doesn’t seem to escape from this and the Finnish management and PR agency Ginger Vine seems to be able to pick up on those promising up-and-coming bands. So now that gigs are slowly starting to be possible again in Finland, they were all too eager to put a package together to showcase the future of rock that you can find in their roster!

Luna Kills gets to kick off the night and what a kickoff it was! Everything just fell perfectly together: the sound mix was top notch, the energy coming from the band was palpable and infectious and every single song of their new album ‘not to be bitter, but it helps’ almost sounded as if it came straight from the record. Lotta was a bright beacon with an emotional and energetic stage presence and stellar vocals that didn’t falter a single moment and were damn right impressive. Add to that the solid backing from the musicians who clearly had heaps of fun on stage and this resulted in a showcase of the enormous talent and promise these young people contain. Tracks like ‘bitter‘ and ‘liar, liar‘ got everyone moving, including me. Everyone who got to experience this will have gone back home with a new favorite band if they didn’t know them yet. Luna Kills, a name to remember!

Next up was Blame Me!, a band with more of an eclectic mix of influences and a touch more epicness to their sound. Already during their opening track… I found myself enjoying immensely what I heard when for instance in the middle of the rather poppy sound you could suddenly detect some actual blastbeats. It’s so strange that it works and generated a loud chuckle from yours truly. Vocalist Bini threw her complete being into the show with a very emotional performance on every track and it was often a pleasure to see Valtteri go nuts behind his drum kit shouting along to some of the lyrics. While it was a strong set again and I saw a lot of people sing along to every word, I found myself wondering about the mix with seemingly the guitars being drowned out by the bass, drums and whatever other sounds were being produced. It was a bit off putting and not as impactful for me personally for what was for the rest a quite impressive gig. Highlights of the set for me were most definitely ‘Off The Radar’ and their sweet-ass cover of t.A.T.u.’s ‘All the Things She Said’.

Setlist:
Toxic
Traces
What a Waste
To Ashes
Black Sheep
Prayers and Dreams
Off The Radar
All The Things She Said
Don’t Save Me
Fire Fuel & Scars
Infected

Before this night, I hadn’t really put the proper attention to the music of Edge Of Haze besides a quick listen to their most recent single ‘Parts of Anything‘. Well, I was in for one hell of a surprise! When the curtains opened and they kicked off with ‘Until We Hit the Water‘, I immediately knew I was going to add them to my rotation. It’s a melodic, catchy and highly addictive kind of music that uses many of pop music’s best qualities. But before that turns you off, they combine this with some of the heaviest riffing and djenty grooving I’ve heard in a while, much in the veins of bands like Periphery and Architects but still with its own identity. Combined with a light show that added a whole lot of theater (the most hyperactive light show of the night), it was one hell of an epic gig! Before I realized it, I was bobbing my head along to their infectious compositions. And at every turn and with every next song, they managed to catch me by surprise over and over again, whether it was with even heavier riffs than before or with the introduction of some decent harsh vocals. After a couple of songs, main vocalist/guitarist Markus dug up his best psychotic facial expressions, adding a touch of storytelling and a cinematic feel to the performance. I can’t imagine that these guys won’t break through to the international stages, looking at what they are bringing to the table. Their upcoming next album has been noted down as one of my releases I look forward to. Edge Of Haze is a band you don’t want to be sitting on, go check their work out!

Setlist:
Until We Hit the Water
Trailblazers
Hallucine
Inside
The Other Side
Parts of Anything
Crushed
Black Lakes

For more pics of the night, go check them out here.