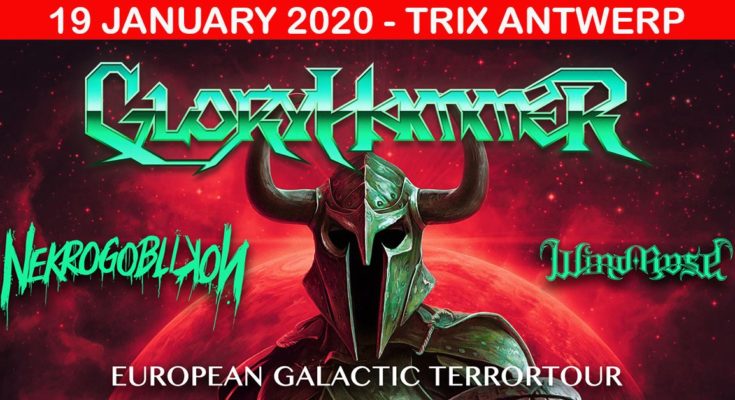 I’ve been exited for months for this show. And, so have many others. The venue was thus completely sold out. An hour before the doors opened, people were already waiting to claim their front row spot or to be the first one to grab a t-shirt. The expectations were high for these bands, and I’m going to spoil that one for you, they all lived up to those expectations. Where do I even start? Let’s start by thanking Rocklive VZW/Biebob Concerts for making this review possible!

The first band of the night was Wind Rose. They only got to play for 30 minutes, and I know that’s normal for the opening band, but man, I didn’t have enough yet of dwarves who were drinking and digging holes. The crowd loved it, we all loved it.

One thing I have to say, is that I suspect that background vocals weren’t live. It sounded too perfect and it’s visible on the recording that I made as well. You hear the vocals, but one or both of the background singers are not behind the microphone. Nevertheless, their energy was amazing, but I have to say that I always enjoy it better when it’s sung live.

They announced that they would come out to speak to the fans after Gloryhammer would finish their set. So they did and I always love it when bands do that. I creates a bond between the band and the fans.

Setlist:
Wintersaga
Drunken Dwarves
Mine Mine Mine!
Diggy Diggy Hole
To Erebor

For me, the first time seeing and hearing this band. I suspected it was in line of the genres of Wind Rose and Gloryhammer as, you know, the bands playing together usually match in some way or another. What I saw: a goblin in pajamas rocking out to something between power metal, metalcore and melodic death metal. Or, goblin metal to say it with one word. It’s music with high energy and it flows through the band members, from which it flows through the crowd. The level of joy was amazing, especially during one song called ‘The Magic Spider‘. I’ve never seen people singing in harmony about spiders before and I absolutely loved it.

For me personally, Nekrogoblikon is not a band that I would listen to at home. But they are one hell of an excellent live band! Definitely go see these guys if you’re into the genre and if you’re in for a good time.

Setlist:
The Many Faces of Dr. Hubert Malbec
No One Survives
Darkness
Dressed As Goblins
Nekrogoblikon
The Magic Spider
Powercore

The show started before the show started. A crew member brought a cardboard cutout of Tom Jones on stage. They played his song Delilah and everybody sang along with the chorus. Then Tom Jones got taken off stage and the intro announcing Gloryhammer started. Only one thing left to say: HOOTS! Starting of with The Siege of Dunkeld (In Hoots We Trust), Gloryhammer started the show we’ve all been waiting for.

Bass player The Hootsman (James Cartwright) came on stage in a wheel chair, or a magical wheelchair as the crowd suggested. Just before they played ‘Magic Dragon’, Angus McFife (Thomas Winkler) asked us how we got to the venue. ‘Who came by car’? *Crowd cheering*. ‘Who came by bus or by train’? *Crowd cheering*. ‘Greta would be proud of you’. I thought it was funny that he mentioned Greta Thunberg. I mean, whether you agree with her or not, she is everywhere. She’s even at a power metal concert about unicorns and goblins. Angus finished with the question: ‘And who flew here’? *Crowd cheering*. ‘I flew here’. ‘On a magic dragon’! And so the song ‘Magic Dragon‘ started.

Later in the show, Angus McFife asked a girl in the front row to get keyboard player Zargothrax (Michael Barber) a beer. She had to crowdsurf all the way to the bar, get a beer, and crowdsurf back before the end of the song. If she did so, she would get a signed Gloryhammer t-shirt form Angus himself. So she did and so she got the t-shirt. What also happened was that more people obeyed Angus’ command to bring beer. So, a lot of people were crowdsurfing with beers in their hands and delivering them to the band. Zargothrax chugged em al down.

It’s been a while since I had so much fun at a show. Even though I saw Gloryhammer 3 times in a row in a relatively short period of time, they managed to blew me away. Angus’ voice is so pure and he hits the highest notes. All of them. It sounds even better live than on CD. The sound quality was good as well. The guitars had a sound that filled the room and even though I was more on the left side, I could hear every instrument and vocals loud and clear.

The way they announce their songs is genius. You really are in that fantasy world at that moment. Gloryhammer plays the role of their characters that they’ve created in their albums really well. The costumes are amazing and it’s like they are acting like their character, but are still being themselves while they do it. It’s like living in a movie for an hour and a half.

So, 5 out of 5 for their show. Well done Gloryhammer! I’ll be looking forward to the next time we meet at Alcatraz festival in Kortrijk, Belgium.

Again, huge thanks to Rocklive VZW/Biebob Concerts for making this magical review possible.

Setlist:
Intro the Terror Vortex of Kor-virliath
The Siege of Dunkeld (In Hoots We Trust)
Gloryhammer
Angus McFife
Magic Dragon
The Land of Unicorns
Questlords of Inverness
The Hollywood Hootsman
Goblin King of the Darkstorm Galaxy
Legend of the Astral Hammer
Masters of the Galaxy
Hootsforce

Encore:
Infernus Ad Astra
Rise of the Chaos Wizards
Universe on Fire
The Unicorn Invasion of Dundee
The National Anthem of Unst 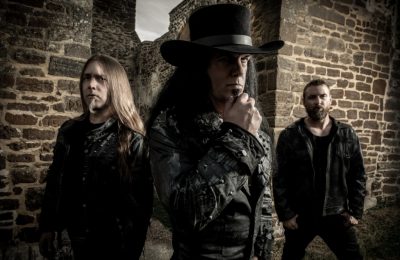 Vltimas announce European tour with The Great Old Ones 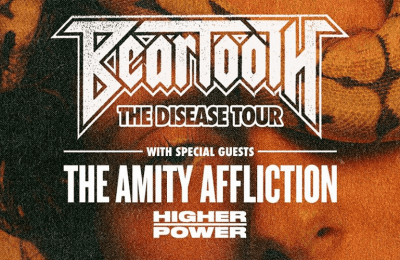