Home Previews GoatHell Metal Fest: 5 reasons not to miss out on this event! 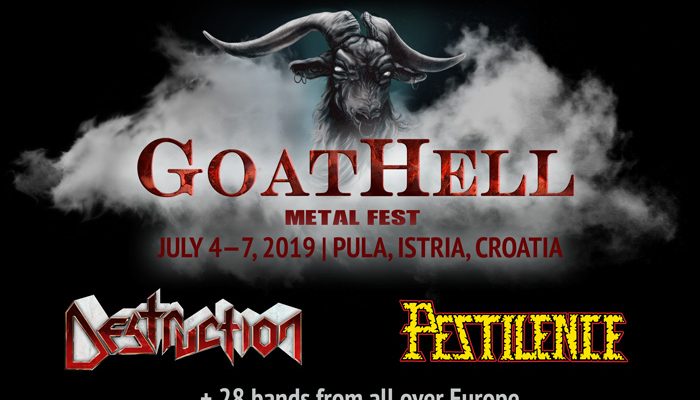 GoatHell Metal Fest is a cool festival happening in Pula, Croatia, on the Istrian peninsula from July 4-7 2019. It being only the second edition, it is a very young player on the Open Air circuit. So just in case this one has really flown past you, there’s a handful of enticing reasons to take part in round two. Here’s your check list:

1. Cult bands at a super-reasonable price

Metalheads that cover lots of ground in Europe, visit a bunch of shows and pick up their share of music and merch on the side, don’t have to depend on cut prices and special offers. A whole festival for the price of a mid-range concert ticket is a strong motivator to take a closer look. To celebrate the ancient death gods in PESTILENCE and German iconic thrash-a-holics DESTRUCTION in the finest Mediterranean summer climate, while dwelling in that conspiratorial underground atmosphere, sure is an awesome thing – not to mention the fact that a not too bloated event with an overseeable stage area raises the chances for a boutique audio experience exponentially, since quality before quantity happens in those places, where no giant battlefield has to be covered in mostly loudness.

2. Made by fans for fans

In order to understand the true meaning of Pula, Croatia, for the South-East-Quarter of the European metal scene and, ultimately, for GoatHell Metal Fest, we have to travel back in time even a bit further and take a sneak peek into a Europe that’s been largely divided by the iron curtain. Managing a tourist capital in the Balkan area, Yugoslavia’s socialist party was pretty relaxed, especially compared against the strictly administered Eastern bloc. Travel destinations such as Pula – connected with several European cities – therefore allowed for a wee bit more liberty. Unlike in other Eastern European countries of back then, rock and metal records were widely available in stores, and where there is inspiration, there will be more of the same art, right? Hence, Pula had rock’n’roll bands in the 60’s, punk bands from the late 70’s on and of course a fair share of metal bands by the time metal had become a thing. Even the tragic Croatian War of Independence in the early 90’s, which made life harder for the Pula people just as for anyone else, couldn’t stop the young wild bunch from obtaining instruments and skills, and contributing to the national and international metal scene as best as everybody could.

In the middle of this cultural breeding ground, a bunch of friends grew up as metalheads, some of them even founded their own bands and played shows with a lot of fellow metal bands from the nearby Balkan region as well as with big names such as Enslaved, Six Feet Under, Vader, Nile, Pro–Pain, Anthrax, Sepultura or Biohazard. Mario (ex NAILED singer), Andrea (ex ANGER singer), Eric (ex MORTAL DIVINITY drummer), Darko and Ivan founded the non-profit organisation KAIROS — Istrian Metalheads Association in 2016. By that time, DESINENCE MORTIFICATION founder/ex-guitarist Mladen and his friend Ksenija, a local graphic/web designer and metal maniac were already playing with the idea of GoatHell for five years. It was the foundation of KAIROS, that made Mladen and Ksenija put their GoatHell plans back on the table for everyone to see and discuss — including Ksenija’s freshly revamped goaty festival logo she had lying in her drawer for so long.

To sum it up: a septet of metalheads, deeply rooted in the Pula metal scene, came together willing to present the Eastern European metal underground to the world, and in return invite the world – fans and artists alike – to Pula. As the ambitious seven have grown up in a region and in times that have you either give up all endeavors or use the little you’ve got to achieve a lot, it’s all about commitment, hard work, and keeping it affordable for the scene they’re lovingly catering to. Made by fans for fans isn’t always an empty phrase and Mladen, Ksenija, Mario, Darko, Ivan, Andrea and Eric have proven it in 2018 just as they will do it this year.

3. Time travel to the roots of the good shit

Does anybody today remember the 1990’s Beyond The Unknown by INCUBUS (going by OPPROBRIUM these days, unfortunately), an early representative of straight US death/thrash metal? In the past 29 years, this genre, as well as thrash metal itself, went through multiple evolutionary stages and strayed far from its mostly godless primal sludge. But in 2019, you can take a trip back through time and, at the muddy delta of olden-days thrash and death, jump into this pulsating protoplasm to let yourself be carried into the dark paradise, while standing upright on monstrous riff waves.

Want a free sample? The Hungarian ARCHAIC pull off carrying the early 90s’ primordial force and musical enthusiasm over into a modern-sounding death/thrash that exhibits its true, roughly 30 year old genes on every corner and in a generous manner.
One is even tempted to call them the Hungarian Vader of death/thrash from the way they push their view on our musical heritage right into our faces: straight, tight as hell and nearly drenched in that magical Tampa-death elegance. Music that pushes into your face like road wind and incites wild thoughts of freedom and fury.

So much for the Yin in our example, and of course there’s also a Yang, shredding in the name of NETHER. Those who painfully miss the pre-loudness war productions from the late 80s/early 90s Morrisound era, with their dirty sound but yet relaxed listenability, should pay their respects to these mad newcomers. In contrast to ARCHAIC, NETHER are the epitome of a band having fallen out of time. How these guys in the spring of 2019 manage to authentically and completely reanimate a sound nearly eroded into nothingness during the course of three decades is a mystery that became manifest in the form of an EP released back in March. This year should very well hold the possibility of this unique independent band’s debut album. NETHER at this point sound like the original, forgotten INCUBUS (the original, not the new metal act), and this is a small sensation in itself. As opposed to many current exploits from the aged originals, there’s a level of enthusiasm in what they do, bleeding out of the speakers and totally carrying you away!

At this point, the best for last: These are only two of the interesting pieces of artillery in a comparison that can be applied to other metal styles at the GoatHell – classic heavy metal, melodic death, core and more invite you to do a trip (back) in time as well as before-after-comparisons, since the curation of the whole festival shows that there’s a whole lot of gut smarts from real fans and lovers of the scene involved. Spontaneously, one could draw a comparison to Germany’s greatest metal garden party, the Headbangers Open Air in northern Germany. GoatHell could easily be it’s (pardon the pun) goat-faced Balkan sister and with a light focus on strong, Eastern European acts, adds another distinguishing mark to its many perks.

As a very special highlight, GoatHell Metal Fest also offers an atmospheric art exhibition  in an abandoned old building, featuring obscure and occult works referring to Pula’s manifold local ghost stories and myths from werewolves to blood-suckers, like the saga of Jure Grando — the documented origin of all vampire legends. The festival’s stage itself is named after this first vampire in history. And that’s where metalheads can join the moshpit and experience bands like Destruction or European death metal spearhead of the very first wave, Pestilence, right afterwards. It’s this special mix that makes GoatHell an event that’s just as exciting as it’s culturally rich and multifaceted.

Travel costs and time do of course seem like nothing to sneeze at for Western- and Central Europeans. But those costs will drastically drop and become virtually zero if you take a closer look. Because if you do, you will realize that Croatia, especially the wonderful peninsula Istria,  makes a fabulous holiday destination.

Located on the south-west coast of peninsula Istria in Croatia, Pula is known for a rich cultural and historical heritage, offering relics all the way from Roman monuments, ruins, the still used amphitheater and colosseum to Pula Castle with cannons from Napoleonic times, and the large historic Pula Harbor. All this served with traditional Croatian hospitality and the Mediterranean atmosphere of a region that features some of the finest wild and romantic coastlines of the Adriatic Sea. This is where the goat, heraldic animal of both Istria and the dark side of heavy metal, has started its annual call in 2018.

GoatHell Metal Fest will lead a growing crowd of head banging metal pilgrims into the light of memorable vacation days as well as into eerily beautiful underground culture deep into the night. The festival grounds are located in the Pula area Vallelunga, a former military basis by the sea, on the northern side of Pula bay, once the largest port of the Austro-Hungarian Navy. From their camping site, embraced by a comforting pine forest, visitors can enjoy a picturesque view on dark romantic ruins of former military stone shanties and the clear sea, which are magically lit at night: by the Lighting Giants, illuminated cranes of Uljanik Shipyard, and a safe bet to get the camera out and shoot an awesome postcard. During the day, keen eyes can even spot Pula Castle across the water — one of many forts in and around this historically rich city. 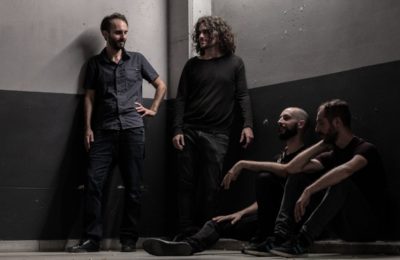