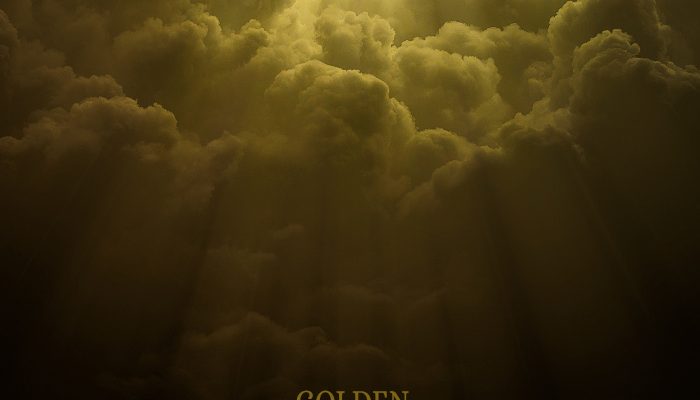 In the realm of music and especially in the rather obscure corner of it, you’ll find some people roaming around with an unbridled sense of artistry and creativity. They seem to never stop producing new creations from the depths of their minds. Sometimes with the help of some befriended fellow musicians/artists or as part of someone else’s project but more often than not as a hermit solo musician/one-man-project. One such creature is the Dutch Maurice de Jong, known for experimental and mind-blowingly loud projects like Gnaw Their Tongues, Dodenbezweerder, Obscuring Veil and many many others. Another project added to the list a couple of years back, is Golden Ashes. Almost exactly a year after the debut release, Maurice returns with the follow up: ‘In The Lugubrious Silence Of Eternal Night’.

The release mostly caught my eyes because it was described as “atmospheric black metal”, which I like to consume in moderate amounts. I was in for quite the rude awakening in a sense. As soon as the first track ‘As Sacred Bodies Wither Into Nothingness’ kicks off the album, you get blasted by layers upon layers of dungeon/medieval sounding synths, accompanied by guitar riffs and drums at a blistering pace, creating a maelstrom of sound that invades your space unforgivingly. Added to that already fully saturated space, there is an almost constant frantic raspy screaming. It’s an experience that hits hard and leaves you dumbstruck for a moment if you’re not prepared. At times it almost felt like it was too much for me to handle.

But after taking the time to dive into this piece of music, the intricacies and complexity of it starts to bubble up. The melodies created by the at times soaring layers of synth bring a certain beauty to the madness and, being described as atmospheric black metal, it started to make sense. Those gorgeous atmospheric pieces we’ve all come to expect are there, they’re just woven into the wall of sound that waltzes over you like a tsunami of extreme darkened enlightenment. Some of the songs even create an atmosphere that is a perfect match with the song title. Listen to ‘Amongst The Mossy Tombs’ where the dungeon synth sound prevails. Or ‘When Every Word Uttered Is As Whip Cuts Into Flesh’ where the vocals at times literally come across as sonic whiplashes.

Golden Ashes‘ second album ‘In the Lugubrious Silence of Eternal Night’ is in no regards an easy album to listen to. It’s an impressive tour de force by the hand of Maurice de Jong on which he seemingly effortlessly mixes gorgeous atmospheres and relentless rawness into a maelstrom of sound. Having approached his take on symphonic/atmospheric black metal from his noise and drone background, he gave it a somewhat different spin. All of it culminated into something rather unique for which you might need some time to get adjusted to, in order to fully appreciate the art.