Goregäng is a two piece death metal band rising from Spring Hill Florida, USA and Sweden. I had no expectations about this newly formed band which was signed to the Asian underground label known as “Transcending Obscurity Records”. Goregäng plays a different form of death metal, the band reflects on the raw and heavy side of thrash metal without being influenced by any other band. And while listening to their debut album I could not compare them with the present trend of old school death metal. And frankly they’re one of the few U.S. death metal bands that blends thrash metal with hardcore and punk metal.

The small lineup of this band consist of guitarist/vocalist Jeramie Kling (Ribspreader, Venom Inc.) and drummer Taylor Nordberg (Ribspreader, ex-Wombbath). Goregäng’s debut album Neon Graves is quite aggressive and heavy, where the riffs are heavily regarded to thrash metal. Listening to Neon Graves reminds me of the ferocity of early death/thrash metal bands. The duo focus on short length tracks but behind the simplicity of the songs arrangement the guitar riffs and the drums are mainly the solid structure.

As there are fast tempo parts which are heavily charged by the guitar riffs. Opening track Cavity in Reality is a short instrumental intro where it ventures into a slow tempo of ultimately gloomy guitar almost like a doom metal song. The next track picks up the pace with the drums delivering some thrash metal and groove vibes. False Flags has a constant tempo and the growls aren’t quite typical in the vein of death metal style.

Goregäng‘s musical interests are exposed by the thrashing riffs and the extreme crust punk influences. Frequently the tracks on the album are short and highly powered, the debut sets the boundaries between the wicked growls and crust death metal. Cathedral of Chemicals is filled with contagious riffs of solid aggression which meets with the quality of groove. Silence is Consent is one of their fastest tracks where the drum beats are kinetic and inspired by d-beat. What’s so interesting about this record is that the tracks are short and straightforward. Most of the tracks are played heavily fast and they’re backed by distorted guitars and it shows the duo members were impacted by the 80’s punk metal bands. Therefore tracks like Spray of Teeth is loaded with heavy amount of riffs, on other hand the mauling drums provides the driven power.

Goregäng aren’t the typical death metal band that wants to emulate the classic bands of death metal. Their style is somewhere between the crusty punk/death metal, combined with up tempo riffs of thrash metal. Feeble-minded Rash is a succinctly balanced by high quality of the performance, in terms of the driven guitar riffs and hammering drums. There is a great level when it comes to the intensity of the tremolo pickings, and the sudden grooves which spreads like plague into the song structure. What’s so astonished about the tracks is that songs keeps on shifting from one style to another.

The slow intro of the album title track is loaded with enough amount of melodies. Vocals are backed by the booming riffs, Neon Graves is a versatile record, even when the band flirts with the slow and doom style metal the riffs tends to sound so compatible with the slower paces. Plague of Hammers is erratically unpredictable, and evolves by the invasive catchy riffs. The gnarling type of growls are also menacing adding more depth to the songs. Goregäng is one of the high lights expressed by the shouting words, and drums striking d-beats laid by the aggressive distorted riffs. The excellent formula of Weightless Sentinels is a crushing heavy d-beat of 2 minutes, the guitars are played at breakneck speed but there is something about this track.

It has an excellent speed and aggression built by antagonistic nature of the vocals. Putrid Judgment is skull crushing death metal track, the vocals has a direct influence to Autopsy, especially the growls which are grisly performed. This Era of Human brings the loud grooves and thrash metal in one combo hit and highly charged riffs. Jeramie Kling generates some catchy and killer guitar shreds, and drummer Taylor Nordberg abrasive drums beats makes each of the 12 tracks worthy to hear! So if you like the 80’s crusty death metal and groove metal then you should give this album a listen. 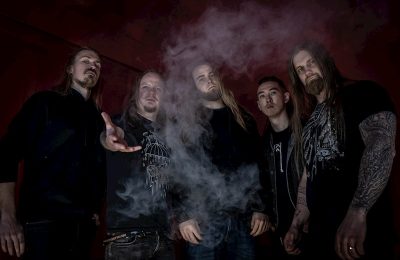