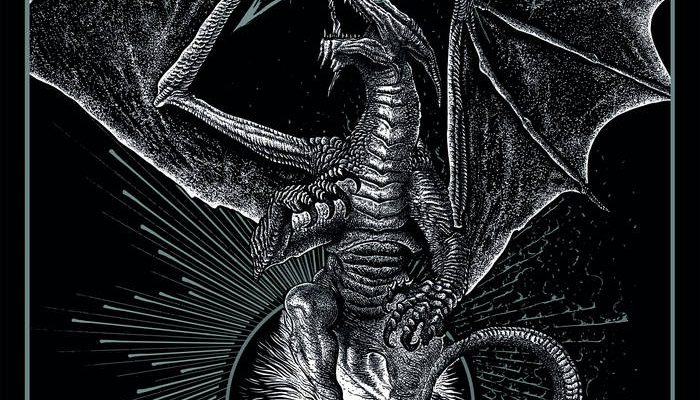 For the last thirteen years Swedish black metal unit Grafvitnir have been creating music that is deeply steeped in the trademarks of Scandinavian black metal majesty. ‘Death’s Wings Widespread‘, their seventh album, harnesses the occult force of darkness and presents ten tracks of pure malevolence, driven in the vein of the previous album. After establishing in 2007 Grafvitnir embraced classic influences the likes of Dark Funeral or Setherial. Although the seventh album continues from where the previous album left off, songs are crafted with mighty riffs and swift blast beats delivering a furious-sounding black metal album. With cover art depicting a dragon symbolizing utter terror and darkness, Grafvitnir unleashes a hellish blizzard of pure black metal supremacy.

Among other Swedish groups such as Avslut, Svartsyn, and Valkyrja the band has successfully imposed its sound and criteria. The majority of ‘Death’s Wings Widespread‘ is played at fast tempo. Songs are drenched in a cold and shadowy atmosphere, where sharp piercing tremolos echo with hissing vocals. There is a great contrast between aggression and melody, in line with their earlier albums ‘Semen Serpentis‘ and ‘Keys to the Mysteries Beyond‘, which had more melodies compared to later releases. Combining viciousness and aggression, Grafvitnir unveil many traits that can be compared to other bands like Thy Primordial.

The album begins with apocalyptic intro ‘Midnattsskogens isande lockrop‘ providing bleak musical work and paving the way to the second track. ‘Helvetesnatt‘ kicks off with venomous riffs and ferocious blast beats followed by sinister howling. The omnipresent tremolo pickings give the songs a pure Nordic sound whereas the effect of the melodies ebb and flow perfectly for a more varied pattern. Songs seem proceed at a compelling speed.

‘In Infinitum‘ offers some twists. Grafvitnir switches between mid and fast-paced tempos while constant screams spew out venomous incantations. The album builds up quickly and often features slow moments that show a variety of riffs. On the fifth track ‘Into the Unknown‘ the guitars creates a pitch-black atmosphere whereas the drums alter between the double bass and hammering beats. Even with little variation, Grafvitnir combines aggression with scathing tempos.

Uncompromising aggression and malice give the album a pure identity. But unlike other Swedish bands who utilize melodies, Grafvitnir prefers to follow their own template. The second half of the album gears into the scathing atmosphere of hellish black metal. For example ‘Wound in Night’s Flesh‘ is imbued in black fabrics of pure and raw black metal. It edges on early Dark Funeral‘s ‘The Secrets of the Black Arts‘. While there is not much change in tempo on the aforementioned track the following entry ‘Inner Void‘ is soaked in ultimate fury.

The demonic hissings along with the surging cold riffs show the gripping mastery of the Swedish duo, the same manner continues on ‘Wings of the Night‘ where the tempo explodes into endless blast beats. The final track ‘I häxmånens sken‘ is yet another mesmerizing acoustic outro that highlights the band’s melodic inspiration.