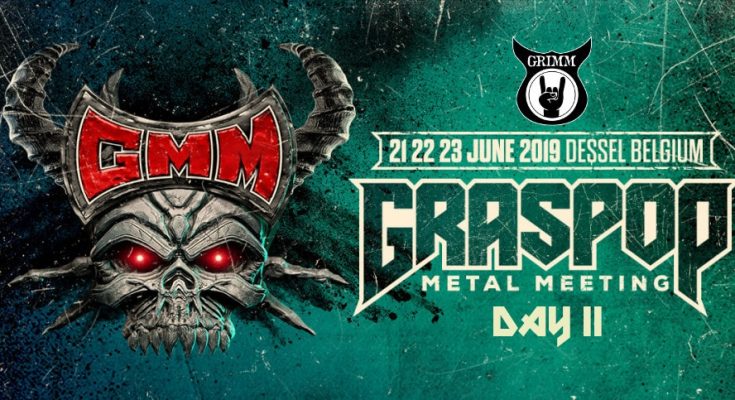 We kick off Saturday with ex-Eluveitie singer and multi-instrumentalist Anna Murphy‘s new project Cellar Darling. This folk-laden metal trio is the perfect way to start the day. If you partied a little too hard during Slayer the day before, it would probably have been a good idea to come and recover during this show. Indeed, Murphy‘s voice, as always, is that of an angel come to heal your hurts. I always thought she added that entrancing note to Eluveitie‘s songs, but it’s nice to see her on the foreground for a change. And she still rocks the hurdy-gurdy like no other.

They did add some pre-recorded vocal tracks, which is something I’m often scared of because of poor execution. Here however it gave the set more body. The music is fairly original, the artists looked like they enjoyed themselves playing it, and the crowd, while it was still early, did give them the recognition I feel Cellar Darling deserved. Cellar Darling gives a solid live performance, which is better than other more renowned bands in the genre, who I’m kinda tired of hearing.

Finally, seeing Gloryhammer live was something I’d been looking forward to for the last couple of years. Especially after they just released their latest album ‘Legends From Beyond the Galactic Terrorvortex‘ in May this year (Read the review here.).

They opened on one of the main stages this Saturday and started their show with the intro of their new album ‘Into the Terrorvortex of Kor-Virliath’, followed by the second song on that album ‘The Siege Of Dunkeld (In Hoots We Trust)’. Gloryhammer played songs from all of their different albums. For example, we’ve got ‘Angus McFife’ form their first album ‘Tales From The Kingdom of Fife’ and they ended with my personal favorite ‘Universe On Fire’ from ‘Space 1992: Rise of the Chaos Wizards’.Lets not forget that they stayed in character during the show the whole time. This makes that you are fully engaged with the show and its story.

For someone that doesn’t know Gloryhammer, all of their albums are one continuing story about unicorns, wizards and goblins. The members themselves being the main characters.

Later that day they also did a signing session and I have to say, they were so kind. While I was thanking them for the show and the music, they were almost more thankful that we all came to see the show. Nice work Gloryhammer! HOOTS!
Annett

Power metal just isn’t for me. Every time I give it a try, I just get plain bored. There are a few exceptions, but Lovebites isn’t one of them unfortunately. This Japanese all-female power metal quintet is impressive to watch however. Whereas the music isn’t really that much more exciting to me, these ladies can play, and it’s fun to see what a good time they’re having. That much energy should be forbidden so early in the morning. I’m kidding of course. Plenty of people showed up too, which was impressive given that it was still early. I suppose I see why people would enjoy high pitch vibratos, galloping drum beats, and hour-long solos, but to me it’s kind of a drag. It was fun checking out Lovebites, if only for their performance or merely to be reminded why I’m not a fan of the genre. Now, if it would just grow on me. Oh well… Guess I’ll have to keep trying.