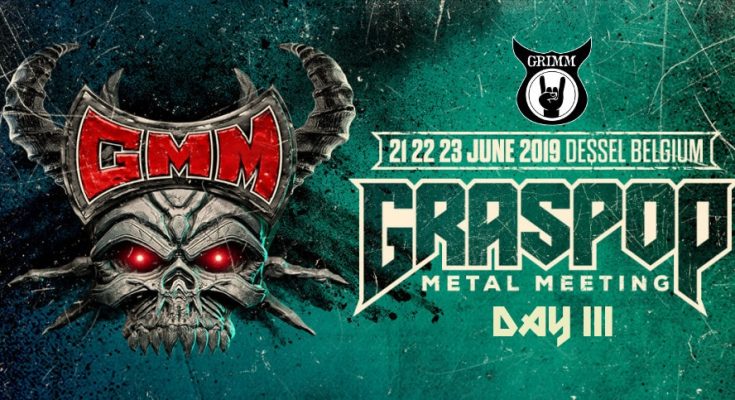 The biggest metal party in Belgium is almost over as we kick off the third day at Graspop Metal Meeting. The festival may be nearing its end but I’m not done having my portion of fun just yet.

Now, Municipal Waste was a bit of a bore on Friday, but their Barcelonian crossover colleagues from Crisix were the complete opposite. Man, did I have a blast at 11:30 in the morning. I was so invested in their show that I instantly forgot about my hangover. Even the less than sub par sound in the Red Bull Metal Dome wasn’t as annoying as it usually would have been. Crisix bring us fast-paced thrash metal with punk influences the likes of Insanity Alert, Objector or even Gama Bomb. If you like these bands in any way, you should have been at that show. It’s all of them combined with more crowd-interactive entertainment. So energy levels were kept high during the entire set. No matter how early it was, at one point they requested a circle pit, during which the guitarist flung himself on a roadie’s shoulders and circled along with us while shredding at the same time.

Then vocalist Julián Baz told us he thought walls of death were out of fashion and challenged us to a game of ‘football of death’. He then tossed a few beach balls in the pit and the crowd just went nuts for them. Pun intended. Now, Crisix‘ drummer Javi Carrión suffered an injury a few weeks before, so the band played with a replacement. but he was present and did take over for a few songs. To top it off these crazy Barcelonians played a medley of well-know songs by Beastie Boys, Iron Maiden, Pantera and Metallica. It seems like all these opening bands know they need to put in extra effort to wake us up. Well they’re right to do so, because that was just awesome!

Amon Amarth weren’t the only vikings to invade the Graspop grounds. Folk/viking metal ensemble Skálmöld landed on our shores all the way from Iceland. It’s an impressive thing to see every member on stage doing their part on vocals. I would not really say there is a lead singer in particular as every voice has its use and merit in the performance. That being said, they all sound quite different. Some members sing in rhythmic warrior-like grunts while others sound more harmonic with their clear choral voices. It all seems intricate but flows together really well on top of the folky pagan melodies that are quite catchy. It made me want to down a horn full of mead and sing along boisterously. Now, if only I knew Icelandic, because, by the way, that’s the only language in which Skálmöld sing.

Been waiting a long time to see Power Trip. Until now, they’ve always been added to line-ups that didn’t really peak my interest all that much, and were frankly too expensive knowing I only wanted to see one band. Perhaps it’s because Power Trip has always been a bit of a maverick that mixes genres and appeals to fans of completely different genres. Their blend of thrash metal, groove metal and hardcore makes for a fantastic musical dish that I gobble up like a child would candy. I think I even spot a bit of crustpunk in the vocal department. Anyway, not the most energetic performance here considering the nature of the music, but all in all a solid performance. Next time I’ll check them out in a smaller venue. I honestly think the atmosphere would be better then.

Graspop Metal Meeting could not have reached its end more appropriately than with the help of the legendary Kiss. It has been a beautiful three and a half days of metal and hard rock madness. I’ve really had the time of my life. Man, I’m already looking forward to next year.

Read our reports on the pre-day, day 1 and day 2 here, here and here!