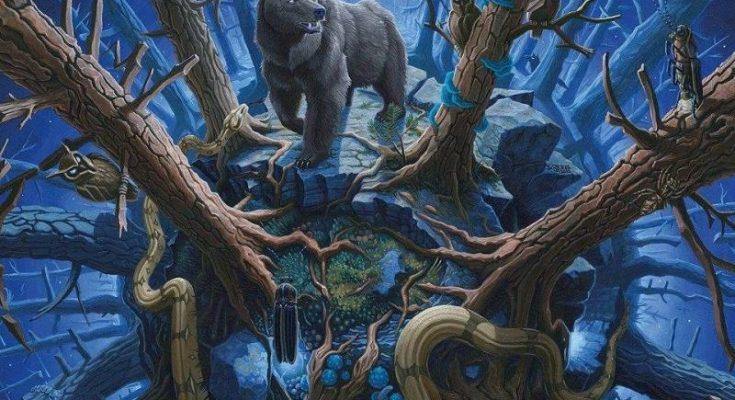 With the sixth release and their first at their new home Napalm Records, Swedish Greenleaf continues following the path they took with their former album Trails and Passes. The changed lineup of back then with the additions of Arvid Jonsson on vocals and Sebastian Olssen on drums stayed on for this creation. Together with founding members Tommi Holappa and Johan Rockner they stuck to their formula of writing more stripped down, straight forward songs. This approach definitely bears some juicy, scrumptious fruits you can’t get enough of. This is clearly not just a spin-off or little cousin of Dozer anymore, but a proper band with its own identity.

When you listen to Rise Above the Meadow for a first time, the bluesy sound immediately catches your attention and will most likely make you nod along to the rolling beats of the drums and groovy bass. At first glance you might say that all the songs are a bit the same and that there’s little to no variation, but you really need several listening sessions to fully discover the awesomeness on this disc. Every time you give it another spin, you’ll discover new little details that’ll make you fall in love with the talent that these dudes portray. I caught myself humming some of the songs quite often this past week.

The album kicks off with A Million Fireflies, also the first single they released (for the video see below). You straight away know what you’ll get for the next 43 minutes. The energy jumps out of the speakers with an infectious desire to get you moving. And they simply continue this in the next 2 songs with here and there a little bit of room for some introspective moments lead by the impressive Jonsson. With Howl they seemingly take back a bit of throttle ’till it’s time to wake you back up just over halfway the song by a blistering finish that’ll make you “howl” of pure fun. Just when you think that it can’t get any better, they kick into the feet stomping and head nodding drum and bass driven Golden Throne. This is one of my personal favorites, reminding me of a Songs for the Deaf-era Queens of the Stone Age. Jonsson tells us to “go get that golden throne”, in my opinion they’re firmly sitting on that throne ruling over the present stoner releases. Probably one of the nicest surprises on the record and another favorite of mine, Levitate and Bow (Pt. 1 & 2), starts off rather quiet but with a certain urgent tension to it, singing about getting stoned. About halfway they lure you into thinking that it’s all over, but then they grab you by the shoulders and drag you into “pt. 2” where they let loose again. Holding on to the energy, they blast through the next 2 songs with the same passion and eagerness to end up in the closer Pilgrims. Again they dial down on the heaviness to create a more atmospheric sound which is a nice showcase of the range that the whole band has. Just when you think that they’re going to let you go easy though, they open up all registers again to end with as much energy and drive as they opened up this album with. Leaving me with a feeling that I just have to hit replay and immerge myself again in this little gem.

Big fan of Kyuss or the older Queens of the Stone Age? I’d advise you to just get this album for your collection, I don’t think you’ll regret it. I’m pretty sure this is going to make it quite high up in my list of best (hard rock) releases of 2016. My verdict: 9/10. Keep on rocking!