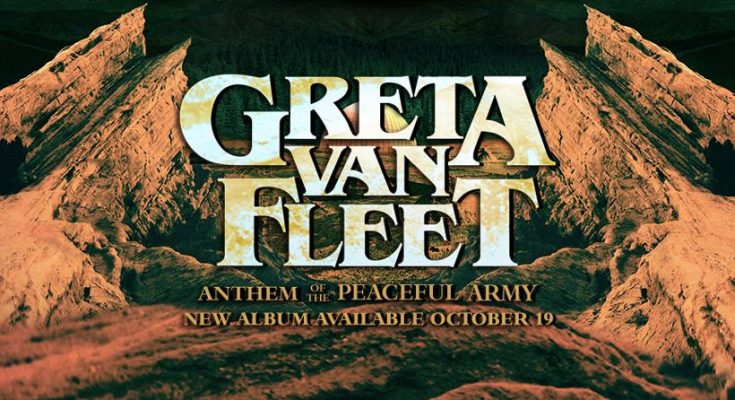 Before I start giving my critiques, I’d like to say three things. First I’d like to say that I’m rarely disappointed in gigs. I’m either not very interested because it’s not my style of music, or I enjoy the show despite the low level of the gig. Secondly, I wasn’t prejudiced during this show. I was less impressed by the second album they released a few weeks ago, Anthem of the Peaceful Army, than their first record From the Fires, so I was just hoping that they’d play more songs from the first album, and they did, so that’s not the reason for the bad review. And no, the review Pitchfork did on their latest release also doesn’t have anything to do with this. Finally, even though Greta Van Fleet (*) is obviously compared to Led Zeppelin all the time, and a lot of people can’t see anything else than a tribute band, I wanted to give them a chance. So the bad things I have to say about this show aren’t because of the previously mentioned reasons, which by the way are not unpopular opinions. This show was bad because of the musicians, setlist and overall show.

The band started off their show incredibly weak by playing Brave New World, not exactly a song to pump up the audience. But well, this could have been just a warm-up and a little taste for what the band was planning on doing. Immediately after that, the band decided to play their most popular song: Highway Tune. A couple of die-hard fans shouted along the lyrics and started moving and dancing, but the rest of the audience clearly wasn’t warmed up for this yet. If it was a conscious decision of the band to properly start off the set by playing their hit song, they should have done it better. In a nutshell: the drummer couldn’t keep his tempo and the fills he played in between were unbelievably badly timed and really just sounded bad. Since the opening riff, the beating heart of the song, is fantastically written, the guitarist and bassist have a crucial role here. But they couldn’t keep up with each other, played messy, even missed some notes here and there which completely pulled me out of my excitement. You can tell me to cut these young guys some slack because they’re only between 19 and 22 years old, but if you’re able to sell out Ancienne Belgique, that means you’re capable of playing a good show, and they didn’t play a good show at AB, they played a terrible show.

Already disappointed by the poor performance of the musicians, next came my favorite song: Edge of Darkness, also from their first record. The singer does some amazing vocal work here, singing from the gut, but always does the same two Robert Plant tricks with barely any variation, which becomes boring super fast. Every now and then he vainly pulled out his tambourine, it didn’t lift up any of the songs. All three musicians kept messing up the song, but then came the point that honestly ruined the rest of the show for me. Greta Van Fleet stretched out this song to what seemed like fifteen minutes. This is something you can pull off playing your last song, giving the audience some more candy to end the show with while the frontman receives applause and already leaves the stage. The guitarist played no less than four solos, all four without any passion, build-up or joy to be found, just mere technical tricks that he’s heard in popular guitar solos and put together in a really bad way.

At this point I was so bored and disappointed that nothing of the rest of the show really stuck with me. My two favorite songs were completely butchered within the first 20 minutes of the show. The next two songs that came were Flower Power and You’re the One, which is basically the same song -using the same chords, the same vocal melodies-, which is just straight-up Led Zeppelin‘s Your Time is Gonna Come. Both songs are shamelessly copy-pasted, including the organ used in the original! If that’s not bad enough, the band decided to play those two songs right after each other, which made it sound like one endlessly long and boring song.

The least bad moment of the night was when the band didn’t play their own songs. A Howlin’ Wolf and Melanie cover would have been a fun and refreshing thing if the start of the show wasn’t that bad. But to be honest I couldn’t care less at this point and I was really just counting the minutes until this show would be over and I could go home. I can’t even remember what the last two songs were before they went off stage and played their encore. When they came back onstage they finished their set by playing Black Smoke Rising and Safari Song, two strong songs. I do remember the band played a little better now than in the beginning of the show, but my mind was made up. I was the first to leave the venue after the set and rushed myself home to rant to my friends.

As much as I think it’s awesome to be that young and already sell out venues and tour around the world and I wish this band all the best, this show was a complete disaster and now I’m officially part of that group of people who can’t say anything good about this band. I really hope they can change my mind in the future, but for now all my interest in this band has vanished into thin air.