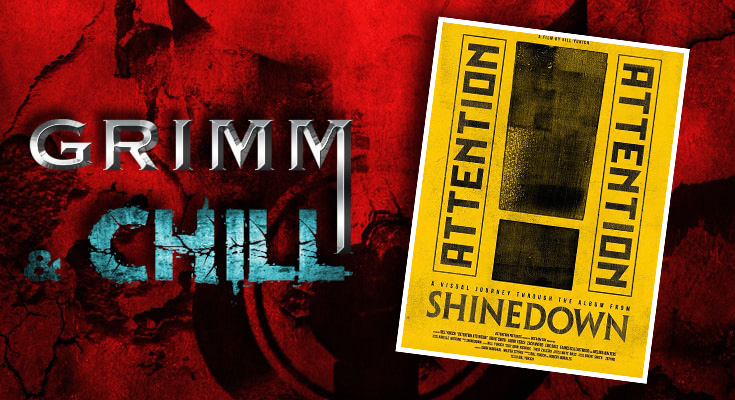 If you know me, you know I love Shinedown. So when I heard that they were coming out with a film surrounding their last album “ATTENTION ATTENTION”, I was beyond excited to see what they had planned for us. Initially when hearing the album, seeing the music videos they put out when it was first released and then hearing that they were going to put out a film later on, I was interested to see how it would come out. I should’ve known they’d do it right. All of the men of Shinedown (Brent Smith (Lead Vocalist), Zach Myers (Guitarist), Eric Bass (Bassist) and Barry Kerch (Drummer)) can be spotted giving it their all throughout the film.

The film highlights the entirety of the album in order from beginning to end with smooth transitions between the songs linking the videos with different visuals and quotes recited by their front man Brent Smith. One of my favorite (but lengthy) quotes is

“You can’t go back, you can’t rewind. It just Is. There is no escaping it. Where did it all begin? My parents? Their parents? Mother? Father? You look them in the eye and swear that you will never become them. You look in the mirror and see that that’s exactly who you are”

Which, I believe, hits home for a lot of people who want to make changes and break the cycle that their family has been running for who knows how long. At the end of the day you are the only one that can change your life. Don’t be afraid to ask for help, don’t be afraid to let it out. Just be the change YOU need.

One of the videos I was most excited to see come together was “Darkside“, it was more theatrical than I could have thought but not in a bad way! It was one of my favorite songs off of the album, and quickly ended up being my favorite of the new videos that were shown in “ATTENTION ATTENTION”. I don’t want to give too much away, in case you haven’t seen it yet (which, why haven’t you?!)

The production of this film was seamless. Bill Yukich and the team did a fantastic job at creating a journey and blending the album together. They create a good flow to keep you interested in seeing where it goes – like a good film should. It’s even more interesting seeing it unfold if you’ve seen the videos they put out when the album “ATTENTION ATTENTION” originally came out and tried to imagine what the other music videos would look like if and when they were to come out.

10/10 would recommend whether you’re a Shinedown fan or not, although it helps to be interested in the music. Great production, great music and fun visuals throughout! Check it out on Amazon Prime, iTunes, Google Play, Youtube etc.. and tell me what you think!

As Brent Smith would say.. ” ‘Til next time“