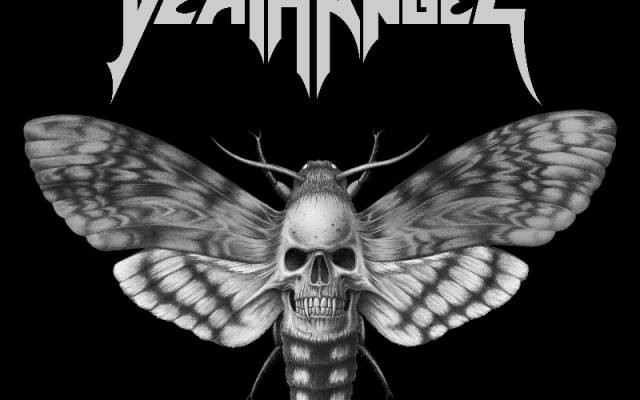 German Deadlock is a band that has been hanging around for awhile now. The combination of the death metal voices and melodic female singing, heavy guitars and a touch of electronic music proved to be a formula for great songs. Recently they went through quite some difficult waters when the founder and drummer Tobias Graf tragically died in a car accident. And on top of that their female singer Sabine Scherer decided to leave the band. But they decided to go on, found a new singer in Margie Gerlitz and just released the first single Berserk from their upcoming album Hybris. Which is to be released through Napalm Records on July 8, 2016.

This week Napalm Records also provides us with our fill of thrash metal with Wisconsin based Product Of Hate, Southern German Dust Bolt and Brazilian all-female band Nervosa. The first have been honing their brutal and groovy thrash sound by touring extensively with Lamb Of God, Meshuggah and Job For A Cowboy. The result is their debut album Burried in Violence and first single Kill. You. Now. The mix and master happened by James Murphy, legendary for his work with Death, Testament and Obituary.
Also Dust Bolt has been working on their sound and transformed into national thrash heroes ever since they won the W:O:A Metal Battle 2011. With their third release Mass Confusion they intend to deliver a heavy dose of old school thrash. Check out Allergy down below while you wait for the release on July 8th, 2016.
Last but not least, the stunning yet tough-as-nails looking ladies from Nervosa pack quite a punch in the song Hostages, playing thrash that regularly touches the border with death metal. Be on the lookout for our review of their upcoming album Agony (June 3rd, 2016).

With Bloody Hammers it seems Napalm Records is on the look-out for their answer on the highly popular and successful Ghost. The occult-inspired doom metal/hard rock sound of The Reaper Comes could definitely remind you of them. Their 4th full-length Lovely Sort Of Death is set to be released through Napalm Records on August 5th, 2016 and is meant to be the perfect soundtrack for a horror movie or even ouija session.

With Kanzler & Söhne you get a taste of something a bit different. Think of Dog Eat Dog or even Hollywood Undead (maybe even more with their use of masks), but in German. The combination of rap, metal and a bit of hardcore delivers a crossover sound that is damn catchy. With Schmerz they give you a taste of upcoming Durch Die Wände (August 26th, 2016).

A release that many have been looking forward to for awhile now, is the new Death Angel! The Bay Area thrash legends released the video for Lost as a little taste of upcoming The Evil Divide , to be released through Nuclear Blast Records on May 27th, 2016.

Nuclear Blast Records takes it upon themselves to hand us quite some death metal/deathcore releases the past week. They started of the week with Canadian Despised Icon, giving us California-based Carnifex in the middle of the week and ending with Polish Decapitated.
Despised Icon release their “Beast” from the upcoming same named album (July 22, 2016). While Carnifex would Drown Me In Blood in their bloodsoaked video clip, a song from their upcoming 6th album Slow Death (August 5th, 2016). Of Decapitated we get Blood Mantra, the title track of their now available album. The live footage you get to see was taken from their March UK Tour with labelmates Sylosis.

Besides some really heavy metal, lovers of hardcore get a little treat from the relentless Nails. With the music video for Savage Intolerance they want to turn your attention to their soon to be released album You Will Never Be One Of Us (June 17, 2016).

Through SPV Finnish Thunderstone gets their voices to be heard. Their very classic approach to heavy metal is showcased perfectly in Fire and Ice from the now available Apocalypse Again.

A few editions of our Videoland ago we already got a taste of the crazy nuts of NY-based Netherlands. And here they are again, with the psychedelic video for Elephuck from the on Prosthetic Records upcoming debut album Audubon (June 17, 2016).

This week Fearless Records provides some top notch metalcore with Oathbreaker by Blessthefall from their now available album To Those Left Behind and Hell In The Hallways by Ice Nine Kills from also available album Every Trick In The Book. The last video takes a really obvious inspiration from the movie Carrie, based on the novel of the same name by Stephen King.

On Massacre Records they released a very southern blues/hard rock song by Nashville-based Cold Truth. The song Grindstone from their now available album of the same name is a perfect roadtrip song for cruising around in your car, enjoy!

On AFM Records they started the week with a song from German thrash/speed/power metal band Paradox. The lyric video for Ballot Or Bullet brings you a song from upcoming album Pangea (June 3rd, 2016).

And with Kissin’ Dynamite you get a hit of glam/hair metal and hard rock. In Hashtag Your Life they clearly put the whole hashtag trend and people feeling the need to share every single aspect of your lives online. The song comes from their upcoming album Generation Goodbye (July 8th, 2016). #‎kissindynamite #‎hashtagyourlife #‎generationgoodbye

On Sumerian Records Periphery brings the progressive song The Price Is Wrong from the third part in a series, Periphery III: Select Difficulty coming to you on July 22nd, 2016.

And with Asking Alexandria and the song Here I Am we get another high quality metalcore moment. This brings their available album The Black back into attention for a bit.

Stitched Up Heart comes with a very melodic modern heavy metal song that I can see starting up a party. The song Monster comes from their debut album Never Alone, to be released through Another Century Records on June 17th, 2016.

Another supergroup has arisen: Sinsaenum. In this case it’s a death metal group with Sean Z (Daath, Chimaira) and Attila Csihar (Mayhem) on vocals, Frédéric Leclercq (Dragonforce) and Stephane Buriez (Loudblast) on guitars, Heimoth (Seth) on bass and Joey Jordison (ex-Slipknot, Vimic, Murderdolls) on drums. On their debut album Echoes Of The Tortured you can find Army Of Chaos, their first single, with additional vocals by Schmier (Destruction) and Dr Mikannibal & Mirai Kawashima (Sigh). The record is to be released on July 29th, 2016 through earMUSIC Records.

And to end this week’s edition of our videoland we bring you the new music video of one of our local, Belgian metal heroes Bliksem. It turned out to be a very beautiful and atmospheric video for Out of the Darkness from their album Gruesome Masterpiece.