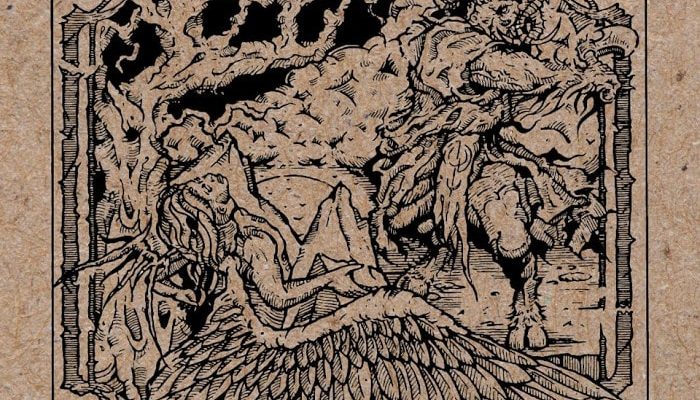 The Belgian band Growing Horns has been roaming the underground scene for five years already. And at the end of 2019 they finally unleashed their very first release upon the world under the form of the EP ‘The Nobility Of Pain’ independently. With ‘We’re All Made Of Scars’ they immediately show what this release is going to be about. Starting off with an ominous sounding intro that slowly turns into the sludgy plodding you’d come to expect from a band that bears the tag of “doom/sludge metal” on their music. When vocalist Dafus Demon pops up, a guttural voice greets us, coming from the depths of whatever tomb he seemed to have climbed out of. Those vocals stay quite consistent throughout, with the occasional snarl, and seem to only intensify the harsh and doomy atmosphere.

‘Luciferian Kingdom‘ moves forwards at much the same pace, continuing the dark and brooding atmosphere. The music banks on repetition, but at the same time they managed to put enough intricacies hidden in every track to keep things exciting. Especially when they at some point turn the speed somewhat up to go into a grooving kind of sound that is very much reminiscent of the original “NOLA” sludge movement. More towards the end of the EP they even go more experimental and progressive. With for instance ‘Butcher’s Blues‘ and its rather unconventional pattern having moments of only the blood-curdling vocals and rumbling bass and other moments that turn the groove up quite a bit, commanding your head to nod along. Or ‘2084‘ which has only vocals coming in about halfway the track and at times almost galloping guitar riffs.

Growing Horns is honestly not necessarily doing anything new here, but they’re doing it very well. ‘The Nobility of Pain‘ is a dark, brooding and crushing release that fits very well on the shelf with some of the better doom and sludge outfits that are around at this time. If that sounds like music to your ears, you should check these guys out for sure, you won’t regret it. We’re looking forward to see what else they might come up with in the future.