I went to A Tribute To Wizz in April and there were a lot of bands available for an interview. I have known the guys from Guilty As Charged for years, yet I found it interesting to interview them. I was curious how things are going with their new bass player and especially, and I think I’m not the only one, when we can expect a new album. 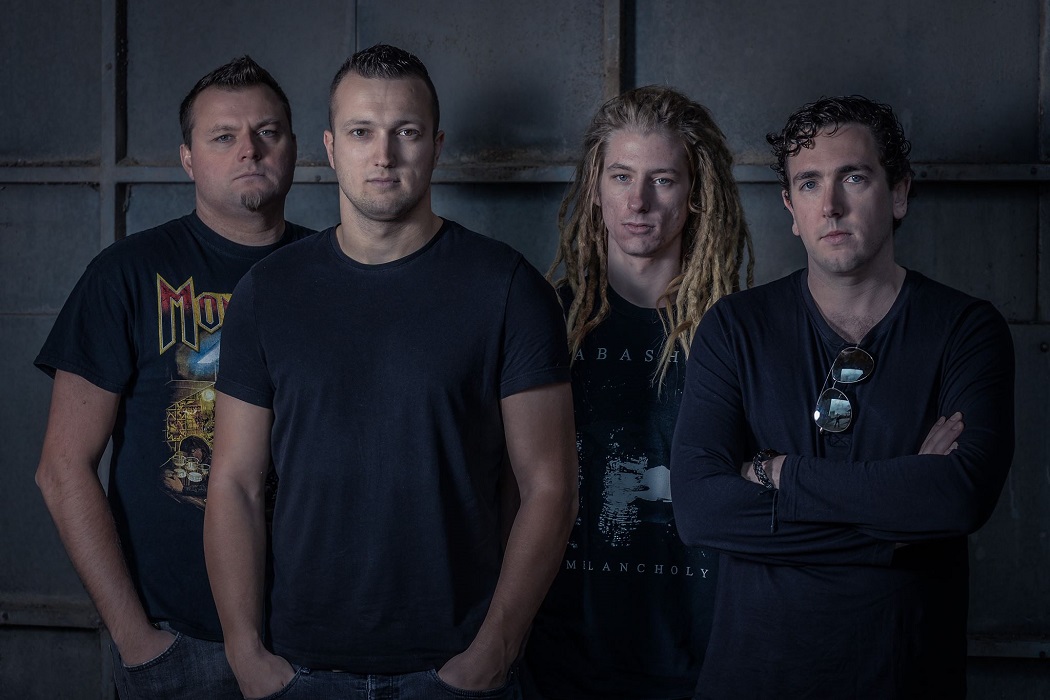 You were announced as indispensable on this tribute. Can you explain this?
Jan: We played here three years ago, but Matthew knew Wizz better than me.
Dempsey: I remember I was in London so I was not present at that performance.
Matthew: I had already met Wizz several times at gigs and we were chatting. I had given him our demo, but he had already made his poster for Wizzfest that year. I think a year or two later he played on our release show and he said he was going to ask us for Wizzfest. That is how it came about a bit. It is not that I knew him very well, but we did socialize.

Then it is an honor for you to be allowed to perform here tonight I guess.
Matthew: Certainly.
Jan: Yes, it does. It was a beautiful evening, lots of people, a beautiful poster, …

What did you think of your performance despite the fact that you had to stop earlier?
Jan: It was a nice show, too bad it was over so quickly.
Matthew: it was indeed a short performance, but we had some problems with our material from the beginning So we had to shorten our set with 2 songs. Still, it was a good show.
Jan: We had a lot of fun on stage and it was it was Jasper‘s second show.

Jasper replaces Hannes as a bass player. Hannes was there from the beginning, so I think it was a bit of adjustment for the band?
Matthew: In the beginning we were worried when Hannes told us he was going to quit the band. But Jasper already has the looks …
Jasper: It’s a blonde guy now. (laughs)
Matthew: … and playing the bass is no problem either so I think we have found a good replacement. So in the end everything turned out well and we can continue with Guilty As Charged. We’re about to keep him. (laughs)

Can we expect a new album as well?
Jan: It took us some time, but for the moment we have about 10 songs of which we are recording 2. We’d like to make 2 videos of those 2 songs next summer and towards the end of the year we would dive into the studio to record the other songs for a new album.

You have done everything yourself for your previous album, are you planning to do it the same way this time?
Matthew: I believe we recorded in three different studios for the previous album.
Jan: We contacted labels back then but without success. We will contact labels again for this album so we will see. It is perfectly possible to do it completely on our own. I think that there will be more variation on the new album. We have hard songs, rock ‘n’ roll songs, melodic songs,… there’s a bit of everything.

Guilty As Charged has been around for 10 years now...
Jan: Has it been 10 years? No… (looks at the other members)
Matthew: From 2008, so yes.
Jan: Indeed, that is already 10 years. We’re going to have a party for our 10th anniversary instead of making an album. (laughs)
Dempsey: I think that’s already a bit too late for that. Maybe we should introduce a limited edition collector’s item next year.

You have already achieved a lot as a band, what do you hope to achieve in the future?
Dempsey: Graspop.
Jan: That is one of our goals.
Matthew: Honestly, it would be very nice but I don’t count on it anymore. But what do we want to achieve? We already toured through Europe last year. If I could, I’d do it every year.
Jan: Many performances for many people. Another tour, that does not necessarily have to take 3 weeks. But 5 days Spain or Italy for example would be nice… (laughs)
Dempsey: I want to break through with Guilty As Charged in America. (everyone laughs)
Jan: …I hope that with our new album we will get a boost to do more performances.

Have you evolved as a band through the years?
Jan: We became very close as a band and I think our music is gradually getting better.
Matthew: We also gained more experience. Our shows are better than in the past.

I remember you guys were playing covers the first time I saw you guys performing.
Matthew: Indeed, we still do that sometimes.
Jan: We have enough of our own written songs to fill our shows. But sometimes we play a cover, if big bands are allowed to do it, so are we.

Thank you guys for the interview!

After the interview, we talked a bit and enjoyed the other bands their performances. In anticipation of their new album, which they are currently working on, here is the video clip of the song that everyone loudly sing along on every performance.