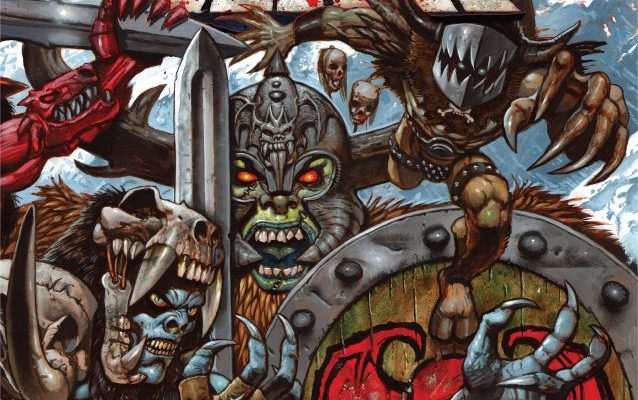 GWAR has been around since the eighties and I don’t think there’s a person in the heavy music world that hasn’t at least heard of this band of misfit aliens. They detest the world they have to live on and make this abundantly clear through their songs and albums. Sadly they lost their ringleader Brockie “Oderus Urungus” some years ago, which is still a huge loss for them and the music world. Now they’re back (much to the discomfort of quite some people that rather saw them stop after that big loss) with his replacement The Berserker Blothar (Mike Bishop) behind the mics and their 14th release The Blood of Gods.

Is it different? Kind of, since the vocals are really obvious not the ones we’ve been used to for so many years. Does it still sound like good old GWAR? Most definitely! Everything you expect from these horrors of the universe is there: the often hilarious and edgy lyrics, groovy heavy metal riffs with a punk attitude, little skits in between to crank up the humor and make you grin and of course an all-over feeling of “We don’t give a fuck ’cause we’re superior to you human monkeys!”…

Right from the start they heckle people all around for their fight against the band with War on GWAR. The track actually shows off in a great way what the rest of the album is like. After leaning more towards metal than punk lately, they seem to have found more of a balance between the two genres on The Blood of Gods. The song starts with some slow riffs which could’ve been on a Black Sabbath release to then let their more punky/crossover thrash side appear in the middle section. That GWAR never shies away from some experimenting in their music gets proven early on with Viking Death Machine, bolstering a jazzy atmosphere and El Presidente, getting more influences from the ska direction. The latter during which I can predict a lot of politician blood will be spilled at live shows. I’ll Be Your Monster on the other hand is a very straight-forward heavy metal/hard rock track that could’ve just as well been written by Lordi or Kiss. And here one of my only worries comes up even more than before: I have the feeling that the quality of the lyrics have taking a step down compared to “the Oderus days”. I get that it can’t always be poetic, intelligent and subtle, but a lot of the lyrics are really simple on this release. Maybe that’s something Blothar will grow in still? After all, it is the first time that he needed to write all the lyrics…

We're exclusively premiering the new music video from our friends GWAR—check out "I’ll Be Your Monster" now: http://bit.ly/2glIxk0

Though most of the songs are composed in such way that they stay interesting and exciting, sort of taking your attention away from the simpleness of the lyrics. You’ll get caught in a moshpit of metalheads with high tempo Auroch and Crushed by the Cross and up for a pogo or skate during the more punky Swarm. Of course there are a few songs on the release that crank up the comedy to 11 and strengthen the lore of the murderous aliens like in The Sordid Soliloquy of Sawborg Destructo and Death to Dickie Dunkin’. And first single Fuck This Place will definitely be a track that’ll stick to you if nothing else, with an infectious vibe that’ll make you eagerly shout along to “Fuck this Place!”. GWAR hates you all and want to make this very clear to the world they despise so much.

Somehow I can’t shake the feeling that the very last track Phantom Limb is actually an ode to their former leader Oderus Urungus, singing about the toll it took to be part of this group and that they still feel him around like you would a “phantom limb”. If this is actually meant like that or not, the whole album is a great piece of work that feels like putting a statement down in honor of Oderus, who wanted GWAR to go on forever, that they are here to stay even if the whole world would be against it. GWAR reigns, GWAR kills, GWAR is supreme!