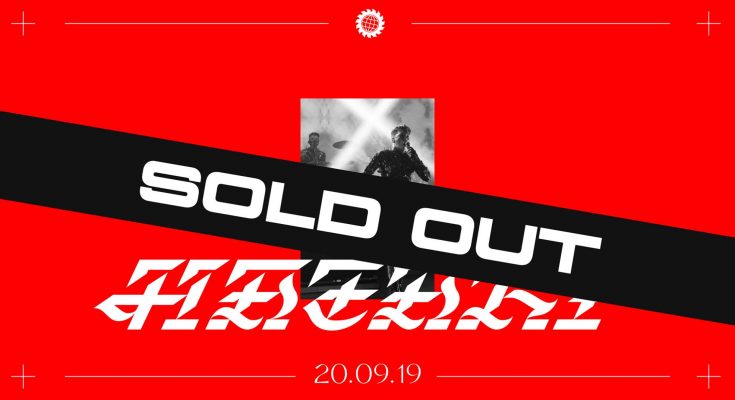 Every year, Eurovision stands for crappy and plastic-looking music and an event where countries from all over Europe (and Israel and Australia) suddenly seem BFF’s until the voting starts. Usually there is also every year some act that is a bit different and that can actually sooth the more alternative person if they’re stuck watching that show.

This year Iceland send quite the headturner for many people watching. The industrial outfit Hatari (****1/2) brought a harsh and extreme performance with a strong bondage vibe woven through it. On top of that, they rebelled by waving the Palestine flag when the camera focused on them, while that was expressively forbidden since the host was Israel. Shock induced on many levels and we loved them for it. So when they came to play a sold out show in the legendary Nosturi in Helsinki, there was no hesitation that we had to catch that show…

We arrived a bit after 9 at Nosturi, a long queue had formed itself in front of the venue, showing just how popular Hatari is in Finland. Interestingly enough, a mixed crowd soon filled up the venue, goths alongside of people who most likely got to know the band through Eurovision song, all were able to enjoy the band’s performance.

A little bit over the scheduled time, smoke started to fill the venue. Their imposing masked drummer rose from the darkness staring into the gathered crowd for a moment before he took his place behind his kit, slowly starting to evoke a beat. It took a while for the intro to kick off, but the audience was excited nonetheless, screaming out their lungs to every possible movement that was noticeable on stage. When finally the 2 other guys came to surface, they kicked off their show properly with “Ódýr”.

At first, the bass and drums were so loud, that the vocalists were hardly audible, but luckily this got fixed during the set. Since I stood really left of the stage, the screen with projections, unfortunately, wasn’t visible to me, but nevertheless I didn’t need more than the trio on stage to perform their songs. Not only were the songs captivating, the BDSM-aesthetics on stage, that go together with their anti-capitalism message were very intriguing to the eye.

The vocals and music went between dreamy and floating and the harshness of industrial beats and aggression, a contradiction that highlighted both sides of their music. Throw on top of that everything being sung in their native tongue and no interaction with the crowd except for the staring and occasionally reaching out with their hands, dipped the whole performance even more in mystery. The audience, like me, was hooked, and got even more excited when the band started speaking quirky Finnish sentences, we are dogs, we are foxes, we are here to dance, and the party erupted.

The band continued with a couple of more songs, until the show reached its highlight, in my opinion, where a Finnish news anchor served as an intro to the next part of the show. Before the band reached to the encore part of the setlist, a short intermezzo with a violin player interrupted their set. Even though it was a very beautiful tune, it felt a bit out of place to me, but nevertheless the lady in question was skilled. Hatari ended their set with their Eurovision song hit, “Hatrið Mun Sigra”. All-in-all this was an exceptional performance, with a message, and definitely a reason to party along with a sold-out Nosturi.