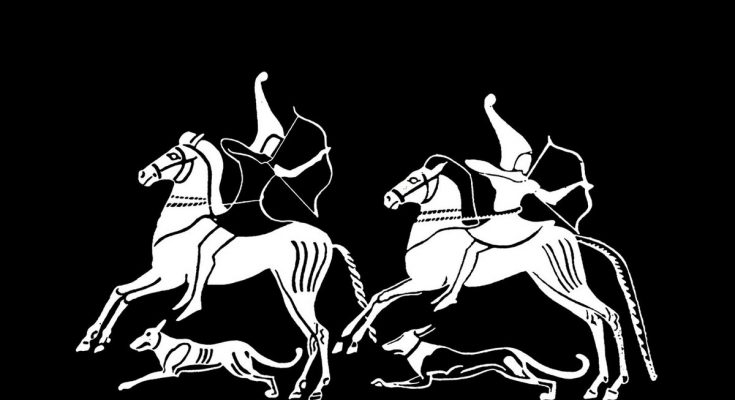 After sixteen years of utter silence, Hate Forest returned with the fifth album to date, “Hour of the Centaur” which was released on December 25th via Osmose Productions. Having released four albums in the past, Hate Forest is Roman Saenko‘s musical project that was formed back in 1995. Taking influences from the Norwegian black metal bands such as Burzum, the latest album is a raw piece of black metal driven by fast-paced drums and sharp ripping riffs. The songs are somehow monochromatic but they veer into mid-tempo sections. The programmed drum machine absolutely does a great job in adding strong dynamics to the songs. If the music of Drudkh defines the dark and atmospheric melancholic style of black metal, then Hate of Forest is exactly the opposite.

“Hour of the Centaur” wastes no time with frills and melodies as the album refrains from unnecessary fillings. Instead, Hate Forest takes a blistering approach to black metal. The songs are structured on scathing tremolo-picked riffs, blast beats, and crushing double bass. For thirty-eight minutes Roman Saenko proves that he can write fast songs that are rooted in the true spirit of black metal. The fifth installment takes a big step towards technicality, the songs are driven by furious drums with the inhuman growls that add the icing on the cake. Hate Forest kicks in with full force and whereas the riffing is sometimes repetitive, the overall sound has a straightforward approach. Right after the short intro “Occidental, Beware the Steppe” the following song “Those Who Worship the Sun Bring the Night” erupts as the drums machine immediately transitions to a rapid blasting pace.

Mastermind Roman Saenko, with the use of the guitars, unleashes a barrage of cold piercing riffs. During the songs, the melodic undertones cascade smoothly while tremolo-picked riffs create a dark feeling and the rhythm guitars enhances the atmosphere. “No Stronghold can Withstand This Malice” contains some excellent tremolo lead guitar sections. There are some similarities to Drudkh, especially when the melodies are injected the whole atmosphere becomes catchy and appealing. Musically the fifth album is quite intense and the sound production is clean and unpolished. The songs are based on Pagan themes, Slavic mythology, and nature. “Hour of the Centaur” features seven tracks that embody the raw style of black metal.

Tracks like “To the North of the Pontos Axeinos” and “Anxiously they sleep in Tumuli” are amongst the fastest entries on the album. The drums carry out some crushing double bass and they are backed by deep death metal growls. Once the track shifts to blast beat, the guitars inject pitch-black tremolos. Hate Forest takes a furious direction thus the similarities to other bands such as Blood of Kingu are quite evident.

The sharp riffs like barbed wire are presented in a straightforward and abrasive manner. The raw nature of the music overall is brought by aggression, yet there are some moments when the melodies are given space to shine. Despite the repetitions, the song transitions to a slower tempo as the whole focus then builds on hypnotic melodies which serve are backdrop to the music. A track like “Melanchlaeni” takes a violent pace from the start. There are other components that wrought magic, for example, the mesmerizing melodies become the center of focus. Whilst the drums are fixed on a faster pace the influences of other bands such as Burzum are noteworthy.

With the use of the melancholic tremolos, Hate Forest creates a beautiful sonic spectrum of pitch-black darkness. The final track “Shadowed by a Veil of Scythian Arrows” is an energetic and fast blistering piece of black metal fury. The in-your-face attack is what makes the newest offering so compelling. Finally, I can say that “Hour of the Centaur” is one of the stellar black metal albums released last year. This was a welcomed effort by the Ukrainian songwriter Roman Saenko.