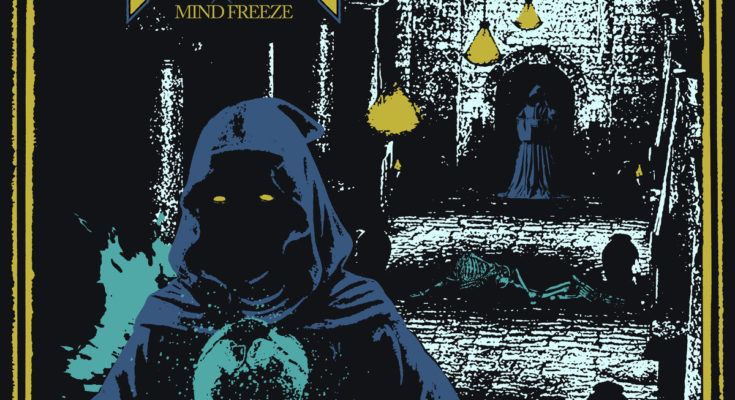 Whether its heavy metal or hard rock music Haunt definitely has an invigorating approach to NWOTHM (New Wave of Traditional Heavy Metal). Comprehensively speaking Trevor William Church, John Tucker and the rest of the band seems to expand into the ethos of this genre with every release. The true manifestation of the classic 80’s spectrum of heavy metal now runs into the band’s music. The third full-length studio album from Fresno, California emphasizes further on complex melodies and guitar harmonies. Almost ten months after the release of their sophomore album, Haunt delivers another one. Since formation this band became a prime example of modern NWOTHM. ‘Mind Freeze’ is filled with elements of the 80’s era with bands such as Iron Maiden, Angel Witch and Ozzy Osbourne.

Haunt now plays heavy metal with such an attitude, and right from the opening track Light the Beacon the band completely sounds nostalgic, energized and fresh. Honestly, I have spent the last two years listening to Burst into Flames and If Icarus Could Fly. And I must say that the latest material is very catchy and profoundly enhanced by the impressive and singing abilities of the talented vocals of Trevor William Church. The second track even gets more interesting when the soaring lead guitars and the graceful melodies flow smoothly into my ears. It is the rocking sensation which the band has been perfecting with each album.

Moreover, the band has become more flexible and to make things more clear. Haunt has found a link between NWOBHM & NWOTHM, the clear influences from bands such as Angel Witch shows how the band has the potential to fit into different retro heavy metal styles. ‘Mind Freeze‘ represents these unique qualities of the band, and the intellectual songwriting skills feel more exhilarating. The songs on the new album have varied tempos there are also strong influences to Black Sabbath, which can be extinguished by the calm vocals of Church, therefore, it’s hard not to love the music of Haunt. Sometimes it occurs to me that the band has selected all the best musical parts from bands like Iron Maiden, Thin Lizzy, and Black Sabbath and they somehow made them fit into the song structure.

Haunt‘s ability to deliver inspirational retro rock tunes and melodies now became the core structure in songwriting. The album isn’t quite heavy though but the music is confined within the traditional style. It also occurred to me that there is a similarity aspect between the previous albums and the latest offering. Many tracks here also have the same formula including the dynamics nevertheless this is still a solid album by Haunt. There are plenty of hooks installed in the new tracks, for example on ‘Divide and Conquer’ the band uses the 80’s synth that creates a rich texture to the track.

And while the vocals are topped notch, the dual guitars emit fancy riffs and the solos are just electrifying. The tracks on the new album boom with plenty of hooks and fresh ideas, ‘Saviors of Man‘ is one effective and vibrant track. The guitars create many fancy solos and the atmosphere is littered with funky vibes. Trevor William Church and John Tucker execute many catchy hooks and tasteful harmonies giving courtesy to old school heavy metal. Therefore you can expect to hear some nostalgic heavy metal music ‘Mind Freeze‘ overflows with memorable guitar harmonies and riffs.

At this point, it’s fair to say that every release by this band shows their progress. ‘Fight or Flight‘ is a mix of riff galore and pounding drums and it’s a legitimate throwback to the nostalgic age of heavy metal. What stands out the most is the frequent use of the synth on the album and especially on the seventh track ‘Have No Fear‘ which beautifully provides a hazy atmosphere. Haunt music is quite engaging and hypnotic every time I hear the harmony guitar solo it transports me back to the early era of heavy metal. So all these multi-elements of the band resulted in lush melodic sounds and dreamy vocals added many textures to the music. Haunt‘s 3rd album is a step forward and the trademark sound is now being expressed by new niches. The band already stands on a strong foundation which allows them to expand unto fresh sonic pallets.