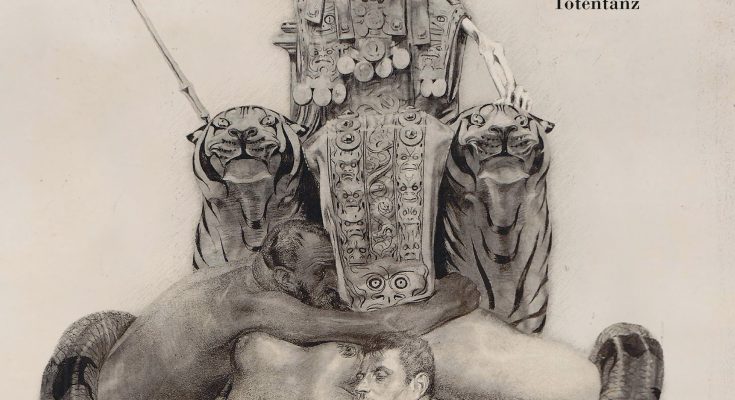 Veterans of the neo folk scene, the German collective of Hekate, has just released their sixth full length record’ Totentanz’.

Their music recalls the minimalism of apocalyptic folk from the early nineties like Death in June.  Axel Mentz’ voice could even be a dead ringer for Tony Wakeford. Backed primarily by soft acoustic guitars, sparse synths and slow marching drums, it oozes a resigned, almost defeatist atmosphere, as if all hope of a better future has long since been lost, which is de facto the essence of the genre.

It combines both authentic acoustic instruments as well as electronic element not unlike, for instance, Qntal to create a unique medieval vibe that still somehow sounds contemporary.  Their lyrics waver between Anglo-Saxon and the language of Goethe with the vocals also equally divided between the sexes.

One of their songs ‘Mondnacht’ is a reworking of sort of the Prussian Romantic, Joseph Von Eichendorf’s poem.

The band has put considerable effort into the artwork of their dance of death by using several unpublished ink drawings from Mentz’s own art collection, namely the ‘Apokalyptische Landschaften’ by the late Hermann Wohler, a painter of magic realism. In light of that you should really look for the limited book edition as Prophecy has once again spared no expense in crafting a beautiful package that lets both the musical and the visual art shine through.