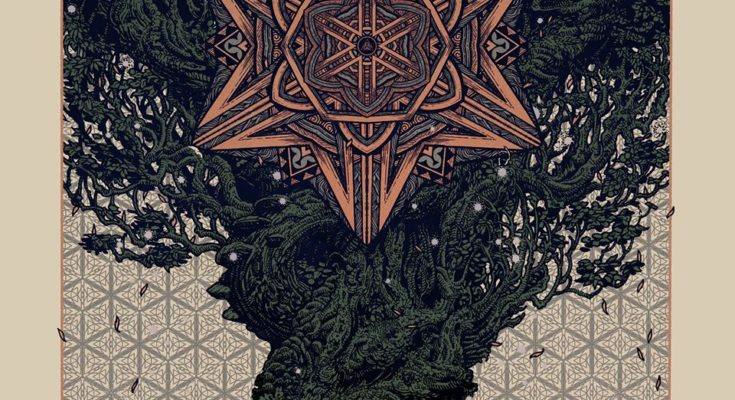 Merely a year after Hexvessel’s fourth album ‘All Tree’ , Mathew McNerney and his band of merry men found themselves so inspired that they already pulled a new set of songs from their sleeves. ‘Kindred’ continues on their long and winding road across the forests of Finland.
Hexvessel’s songs are full of magic, not the kind that involves dragons and sorcerers, but brought about by nature itself. They are first and foremost stories, folk tales full of the wonders of the sylvan night.

Like the troubadours of yore, they encounter all sorts of peculiar personas as they travel the lands wide and far. All these influences are weaved together to cast their magical hexes. Most apparent among those is the folk rock from the seventies like Steeleye Span and Fairport Convention, hauled through a psychedelic kaleidoscope operated by King Crimson. Particularly, McNerney’s velveteen, soft voice recalls those bygone times as it takes center stage in these yarns. The opening song ‘Billion Year Old Being’ is a fine example of this.

However, their mischievous forest folk won’t be limited to this kind of Woodstock in the woods type of tunes. On a song like ‘Demian’ you could mistake him for the Karelian nephew of David Eugene Edwards where he trades the pastoral folk for brooding Americana. In another vein, their version of Coil’s ‘Fire of the Mind’ sounds as sacral as the original in its Dead Can Dance-like cadence, but adds a touch of Finnish melancholy as only they know how. It was recorded live in one take at a mental institution.

‘Bog Bodies’ in its turn, takes you down a hazy swamp that lies somewhere hidden deep amongst the pines of Twin Peaks. ‘Phaedra’ is another cornerstone of the album with an accompanying video that is a worthy short film in its own right. This story of death and rebirth has a strong American Gothic vibe where McNerney vocals could easily be mistaken for a young Nick Cave.

After a short interlude in ‘Family’ the record gears up for the final three compositions. ‘Kindred Moon’ offers a thematical synthesis in a similar way as the words ‘Magical and Damned’ also sum up the essence of a Hexvessel song in this particularly melancholic marriage. The same moods takes us to the end of the road where we find the ‘Joy of Sacrifice’.