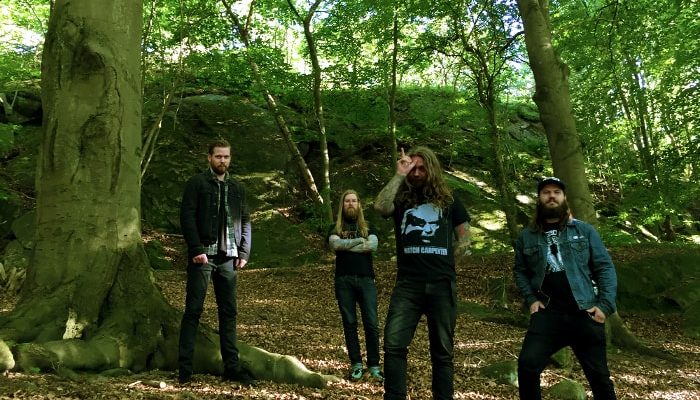 Last year I discovered Highrider with their EP “Armageddon Rock” which was already a very impressive release (read my review here). And this year they’ve raised the bar again with their first full-length album “Roll for Initiative” (read my review here)! So when I had the chance to dump a few questions on them, I didn’t hesitate long. Wrote some questions down, mailed them and I received the answers from vocalist/bassist Andreas:

Hi guys, how you’ve been?
Thank you!  Things are great actually, just finished a 10 day tour in Europe together with our friends in Fredag den 13:e and we released our first album finally!

First of all, I want to congratulate you with “Roll for Initiative”, I really liked your first full-length. How has the response been for the rest so far?
Mostly positive in the reviews I would say, people seem to dig it when they get passed the fact that it doesn’t really fit any single genre but many. It has been described as a fresh wind in metal a couple of times and we take that as a great compliment. Of course, we’ve had a couple of really bad reviews also but I understand that our stuff might not be for everyone so it’s not a problem really. I appreciate true honest feelings even though it’s not always in our favor.

Last year I also reviewed your EP, with which I wasn’t completely convinced of you yet. You wiped my doubts away with a massive sound and highly interesting album. How did you approach the recording this time around to get yourself to that next level?
We knew from the start that we wanted a rougher sound this time. Not to put any shadow on “Armageddon Rock” but it was our first effort and we didn’t really know how it would turn out when we recorded it. I think we did alright this time but I’m rarely a hundred percent satisfied with anything I do. I think we managed to put different styles together without making a complete mess. We went into the studio focusing on getting the songs recorded as fast as possible with no time for second guessing or doubt.  We also learned a lot about keyboard sounds and keyboard recording during the process which I think shows a great deal from last time.

Where does the title of the album come from? And the cover artwork? It reminds me of Dungeons & Dragons and stuff like that… is there a story behind it?
The title is of course taken from pen and paper role-playing games, that’s obvious for most metal fans I guess. The lyrics has little to do with role-playing though some reviewers seem to focus a lot on the title and cover art and think we are a bunch of nerds or something but it’s just a borrowed concept. There was a great wave of Swedish role-playing games and gamers back in the 1980’s and there has been a big revival with books and articles in the papers during the last couple of years so we were influenced by that. It was the concept of chance that got to me, the dice roll to decide your fate. Just like chance is a factor in real life. What if I was born in Syria or China or whatever, how would that affect who I grew up to be and what life I would lead.

The artwork is a story in itself. When I was a small kid I played a lot with action figures like He-Man and so on. My friend had this scary figurine that he got from his cousin or something. We didn’t know what it was but it was a really cool looking warrior with this blue helmet and red dots for eyes. It made a big impression on me and I never forgot about it. So, when it was time to pitch cover ideas I searched the internet and found out it was actually Warduke from Dungeons and Dragons! It seemed fitting we use him so we let a friend of ours make a version of him for the cover. The style is resembling that of the illustrations made for the Swedish games from the 80’s.  They were basically all made by the same guy, Nils Gulliksson. We wanted something clean and simple that would make an impression of familiarity and also be a bit scary in a way, like reminding of something from your childhood that stirred up your feelings. I like to think of Warduke as a combination of Jason Voorhees, Sauron and the Terminator, you can’t reason with him or talk your way out of a confrontation, he’ll just kill you on the spot for no reason.

Where do you get most of your inspiration from for the music and lyrics?
Up to this point we’ve been inspired by the music we listened to growing up. I’ve always listened to a lot of different heavy and fast music, anything from Slayer and Motörhead to Rainbow and Deep Purple. But to be frank I think it’s boring to play within the same genre or style for too long. It´s fun to blend things together and also try to make your own mark in a way. The lyrics mostly come out of current events or sometimes something more personal. We live in crazy times, it seems humanity is hell bent on returning to the middle ages or something and I think that reflects in the lyrics. Religion making a comeback, can you believe it? People for real saying that the Earth is 6000 years old, others consumed with conspiracy theories concerning just about anything going on in the world. It’s crazy and I don’t think it will end well. There is a great distrust in science and technology in favor of charlatans selling snake oil over the internet, people just don’t want to face reality anymore so they build their own reality via the internet. We thought we´d have flying cars and work four hours a day by now, whatever happened to that?

Now that “Roll for Initiative” has been released, what are the nearby plans?
We haven´t written any new songs for a while so I´m looking forward to doing that. We are in a place where we might make some different music than before. I´m not sure in what way but like I said, we haven´t made any material for a while so I´m not sure what will come out of it to be honest. The slow parts will be slower and the fast parts will be faster is my guess. We also just came out of a tour in Europe and hopefully we’ll be on another one early next year. There are still many places we haven´t played yet so we are eager to go out soon again. I’m also hoping to progress a bit as a vocalist if that´s possible, haha.

If you’d get to pick, what would be your dream artist or band to tour with?
It would be great to go out with High On Fire. They attract so many people with different tastes, from metal to hardcore and punk and that would fit us perfectly I think. Personally, I would love to go on tour with Danzig, that would be a hilarious spectacle. Other than that, I don’t know. There are many Swedish bands that would be great also, Martyrdöd, At the Gates, Wolfbrigade, Marduk to name a few.

You have a quite unique sound mixing heavy metal with hardcore elements and on top of that the ever-present Hammond organ. How did you guys come up with that explosive mix that you dub as “Armageddon Rock”?
It is a mix of doom, thrash, d-beat, Motörhead and the way Peter Steele approached making cover versions of 70’s hits with Type O Negative and Carnivore. That’s it. Listen to Manic Depression by Carnivore and you´ll get my point. The organ is mostly because of Rainbow and Deep Purple. You don´t hear that big roaring sound today, keys and organs are mostly heard in symphonic metal or retro bands but almost never as a real part of a group with a contemporary sound. I think it´s a shame really cause it gives you a lot to work with.

And if the Armageddon really was happening, what would be the first thing you’d do?
If we don’t perish immediately or in the coming months after the fact it would be great to go on tour I guess! Unfortunately for us Armageddon probably won’t happen by nuclear war which is our favorite, but in a slower process of degeneration, disease, starvation and war over common things like crops and water. That will keep us occupied from writing songs I’m afraid, busy struggling for survival. Sad!

Anything you’d like to add still or tell our readers?
We hope you take the time to check out our music and we hope to see you on tour in the near future. Thank you very much!