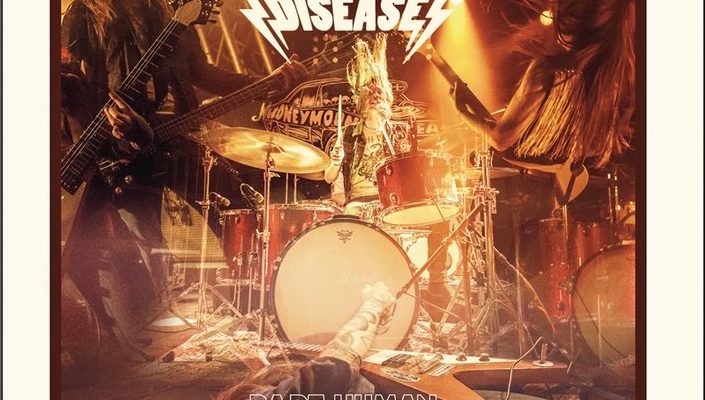 The Swedish groovy rock ‘n’ roll band Honeymoon Disease released their second album ‘Part Human, Mostly Beast.’ last year in November. When you look at the cover of the album, it looks like a photo of beastly good performance. In the CD booklet you will find a photo of the band and the lyrics. Honeymoon Disease consist of Jenna (guitars, vocals), Acid (guitars, vocals), Cedric (bass) and Jimi (drums). ‘Part Human, Mostly Beast.’ is available as a Digipack CD and as a black LP.

This album starts easily with a catchy song called ‘Doin’ it Again’. What immediately strikes me is that in my opinion the vocals are a little too quiet, so the instruments dominate a bit sometimes which is a shame because Jenna and Acid have both great vocals and they both sound great. One having a clean vocal while the other sounds slightly more hoarse with a rounder sound. ‘Tail Twister’ is the first song on the album where you can hear them sing together and it’s very nice to listen to. It’s an old school song and if I had a tail, I would definitely twist it on this one.

‘Part Human, Mostly Beast.’ is a varied album, Honeymoon Disease brings a mix of old school rock, jazzy and swinging rock ‘n’ roll songs. Musically, the emphasis is on guitar work, but they also use other instruments like a saxophone or a trumpet in their songs. You hear the latter for example in ‘Fly Bird, Fly High‘ which is a rock ‘n’ roll song with a high energy level.

The second part of the album is, in comparison with the first part, a little less fun to listen to. The songs sound good, but personally I miss songs that pop out like in the first part. But when you start thinking Honeymoon Disease is out of surprises, they build up the atmosphere again towards the end of the album to pop in at the end with ‘Electric Eel’.

The attention is placed, both vocally and musically, especially on the two ladies of Honeymoon Disease. When I listened to ‘Part Human, Mostly Beast.’ I couldn’t find the link between the music and the title because the music doesn’t sound “beastly” to me. But after taking a closer look I think that it’s the tough motorcycles that the title refers to. In my opinion, this album sounds pretty good but I think they have a lot more to offer. Of course it’s good not to reveal all your talents at once. If you ask me, Honeymoon Disease is a promising band from which we can expect a lot of good things.