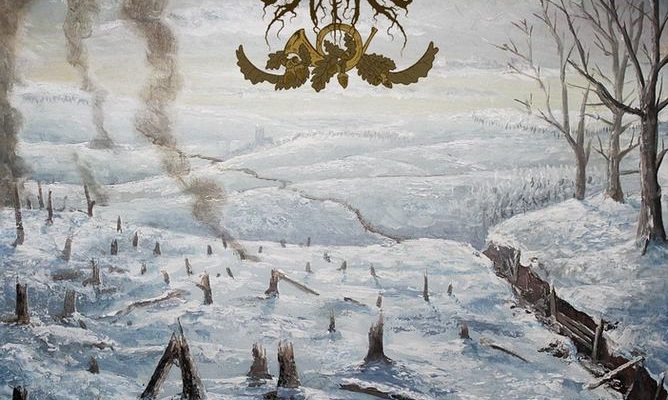 Pagan black metal and folk music have been quite compatible with each other within the spectrum of modern black metal. But the roots of pagan black metal even go way back to the early days of the nineties when bands such as Flakenbach and Windir introduced these unique measurements. One such example from the German black metal scene is the pagan/folk solo project: Horn. Over the past, the German musician Nerrath followed the footsteps of old school pagan black metal bands. The prolific multi-instrumentalist managed to release seven full-length albums and a single EP. Horn has cleaved its path from the Northern Rhine region of Westphalia by exploring new ideation through presenting each album with a unique and refined sound. Mohngang is the band’s newest output released by Iron Bonehead Productions and it’s one of the highlight albums of the year 2020. Generally, nature has been the main influence on many black metal bands and Horn is no different.

The album begins with Einleitung – Der Wettlauf zum Meer which is a form of a somber melody played by a beautiful cello and climatic soundscapes. And right from the first moments of the following track Satt scheint der Sud der Tat the prominent humming of the bass guitar and the drums immediately transits across the thundering reverberation of the blast beats. The clean vocals soon become one of the hooks that make the music of Horn so appealing. Nerrath focuses on the traditional instruments of folk music and finds beautiful ways to weave these melodies. The riffs are often accompanied by compelling melodies and it’s quite notable that Horn usually plays at mid-tempo. Over the span of forty-eight minutes, the sole member manages to show much diversity, for example, the acoustic guitar is professionally layered in the song texture.

De står her somsletta has strong folk influences stemmed by the galloping guitar riffs and this actually keeps the tempo somewhat unhinged. However, every track feels catchy, and truly inspiring. Horn demonstrates rich melodic textures and the attempt here is actually in the modern direction. The guitar tone is huge and heavy. As for the drums they’re pounding in addition to the musical context. The album is driven by the notion of the contemporary pagan black metal style. Horn influences from the Scandinavian and the German black metal bands such as Finntroll, Windir, and Isengard. The horns are used to create an atmospheric vibe, therefore, other songs like Wär Nicht Traubhagel and Handkreis und Chor have variant melodies and the rhythm is produced by powerful guitar riffs.

The music comes nowhere near the atmospheric style of black metal. Horn‘s musical craft fits into the mid-tempo and that’s when the listener will come across the rich proportions. Mohngang is epic in scope and its melodies often reach the fantasy realm of pagan black metal. The guitar creates many dramatic moments and they’re quite polished and contribute to the melodies. Upstream Canals, a Ship’s Bell Sounds is a standout track and show the sonic qualities of this contemporary band. I find that many of these songs have strong Viking themes of heroism. These musical embellishments such as the clean vocals might feel simple but they are effectively used.

Through these compositions, Horn brings forth its sonic qualities and while the guitar mainly boasts that majestic and epic feel, the drumming performance is quite impressive. Even the low black metal pitches are perfectly fitted to the music. Horn forges these rich pagan melodies that contrast with the tempo. Mohngang also includes a beautiful piece of Celtic folk music and it’s featured on the instrumental track Dulcimerstück. Vom Tribock Hohl geschossen is a thunderstorm of heavy riffs and mighty drum blows. In a similar style to the previous tracks, the vocals here sound harsher which makes this song unique. Judging upon the album production and the musical skills, Nerrath opted to bring more power to the music. Mohngang features the pagan burst of energetic tempos and mighty melodies that creates triumphant sensations.

Ødegård und Pendelschlag begins with clean vocals and the compositional arrangements of this track are fulfilled by the traditional form of Viking folk music. While these elements are often applied on all the nine tracks of the album. The album closer Die mit dem Bogen auf dem Kreuz is adequately played by the cello instrument and it originally appeared on the band’s previous album TURM AM HANG.

Fifteen years since the establishment, mastermind Nerrath continues to evolve his musical skills turning Horn into a more inspiring band. Mohngang is a balanced album that conjures up the ancient folk/Viking music. If you are into pagan black metal, then I recommend you to check out this album.