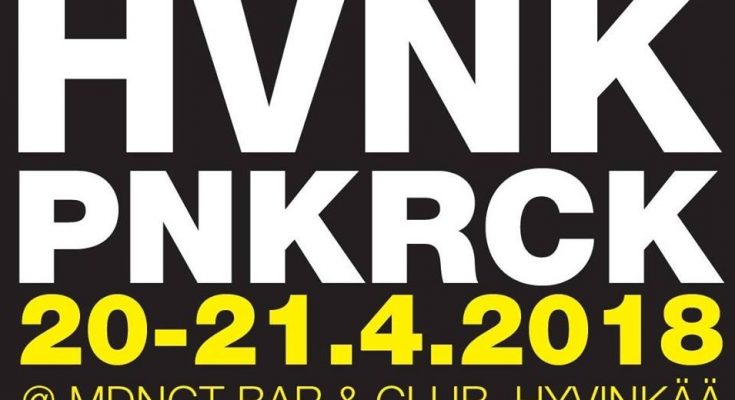 Last year I discovered by coincidence a small 2-day underground punk and hardcore festival called HVNK PNKRCK. We attended this event that took place at the literally underground bar MDNGT club in centrum Hyvinkää, Finland and had a great time (for our report go here). Their second edition seemed like a succes and there was no choice but having another edition this year. So here it is: HVNK PNKRCK 3.0, taking place again at MDNGT club on April 20th and 21st, for all your punk and hardcore needs…

Just like last year, the line-up consists out of mostly Finnish bands of which quite a few dabble more in the underground realm of the punk/hardcore scene. Every day the doors will open at 19:30 and the first band should start at 20:00. For a look on what you can expect there:

On Saturday there are a few things that immediately caught my eye: there are few bands coming back from last year’s edition and this year they’ve doubled the amount of foreign bands on the festival! One of those foreign bands is headliner and Swedish band Satan Takes A Holiday. When checking them out, I was pleasantly surprised by the not really punk, but more garage rock sound of these guys. In a lot of songs they remind me of the good old days of early White Stripes or even The Eagles of Death Metal, which I can only applaud. Awesome to see that the organisation dares to think a bit out of the box and bring a band on as headliner that doesn’t necessarily fits the “punk and hardcore” description.

The two bands that are coming back for another edition are the Finnish Rakas Nikotus and the Welsh band Bogans. Especially Bogans I’m personally looking forward to really much with their unruly gig last year and an impressive debut EP (for our review go here), I’m curious to see how much their extensive touring improved their crazy show! The rest of the bands that day are again a really cool selection of Finnish punk rock and hardcore punk bands, it promises to be quite the wild edition again…

If you happen to get hungry during the festivities, you’re in luck. There are several restaurants within walking distance from the venue including a McDonalds and a bunch of pizza/kebab places.

Drinks shouldn’t be a problem either since it takes place at a well-stocked bar. One thing we just have to mention again here, is that the festival has gotten a deal with Brewdog to sell their flagship brew “Punk IPA” at a reduced bar price during the event. What could be better than sipping your craftbeer beer brewed by the “brewers with a punk attitude” while checking out some quality punk? Nothing much I’d say!

As mentioned earlier, the festival takes place in Hyvinkää. This is a smaller city about 40 min north of Helsinki city, by train and car. The public transport is a very convenient way to get there, since Hyvinkää’s railway station is barely 5 min walking from the MDNGT club.

If you don’t really live in the neighborhood and don’t want to travel up and down, there’s some good news! HVNK PNKRCK has struck a deal with the local Cumulus hotel. You can book a room there with the discount code “PUNK2018”. The hotel is located on the main street 350 meters from the event.

On the day of event tickets are sold at € 10 / day. Ticket service is included in the ticket price!

Hopefully see you there to have a drink! If you want to prepare yourself, there’s a really cool playlist made to check some bands out: