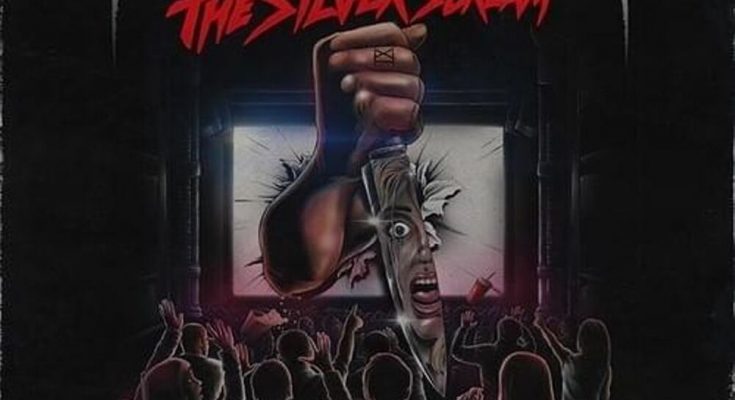 Ice Nine Kills is an American metalcore band formed in 2002. Their last full-length ‘The Silver Scream’ was released back in 2018. Every song on the album is an homage to the horror cult films like Halloween, Friday The 13th etc. So since today we’re putting some focus on Halloween with the site, we thought they deserve an review of this album. Special note: For almost every song on the album they made a short movie were the video clip is included.

‘The American Nightmare’ is based on Nightmare On Elm Street and this song is what you call starting with a bang. Their horror metalcore heaviness is a nice touch and together with the grunts and clean vocals make this a killer track. Positive note to the drummer whose drum parts are a treat. ‘Thank God It’s Friday’ focuses on Friday The 13th and is a typical metalcore song in a very good way with a catchy chorus based on the movie. Every metal and horror freak is gonna love this.

‘Stabbing In The Dark’ is the third diamond in the rough based on Halloween: a freaking heavy song with at the end a massive breakdown. After this, it tumbles down a little bit with the mainstream song ‘Savages’ based on The Texas Chainsaw Massacre. ‘The Jig Is Up’ based on Saw with a guest appearance of Randy Strohmeyer, former guitarist of the post-hardcore band Finch. They strike back with ‘A Grave Mistake’ based on The Crow and is a slower song that even introduces a piano- It’s almost like a love song.

‘Rocking The Boat’ is based on Jaws with a guest appearance of Jeremy Schwartz who is their old guitar player and he did the co – lead vocals. He was a part of the band from 2002-2009. It’s a more slower song. ‘Enjoy Your Slay’ is based on the cult movie The Shining. ‘Freak Flag’ is based on horror movie The Devil’s Rejects, a movie from the industrial metal and horror grand master Rob Zombie. ‘The World In My Hands’ is based on Edward Scissorhands with a guest appearance of Tony Lovato from the punk band Mest. Since ‘A Grave Mistake’ the musical quality was a little bit lower with less originality but with ‘Merry Axe-Mas’ that gets resolved. No surprise that it’s my favorite song on the album, based on the movie Silent Night, Deadly Night. High quality metalcore where they give the absolute best of themselves yet again.

‘Love Bites’ is based on the movie An American Werewolf In London with a guest appearance on vocals from Chelsea Talmadge, an actress known from the Netflix series Stranger Things. We end with the creepy ‘IT Is The End’ based on the horror movie IT with guest appearances from JR Wasilewski and Buddy Schaub from Less Than Jake and Will Salazar from Fenix TX. Nice Ending. Creepy and aggressive.

There simply is no other than Ice Nine Kills. While some of their songs sound like your standard metalcore tracks, the strong dedication to the horror movie theme gives them that edge that makes them stand out above all the rest. Also check out their live album ‘I Heard They Kill Live’, out since October 30th 2020 to get a taste of what they’re like on a stage…