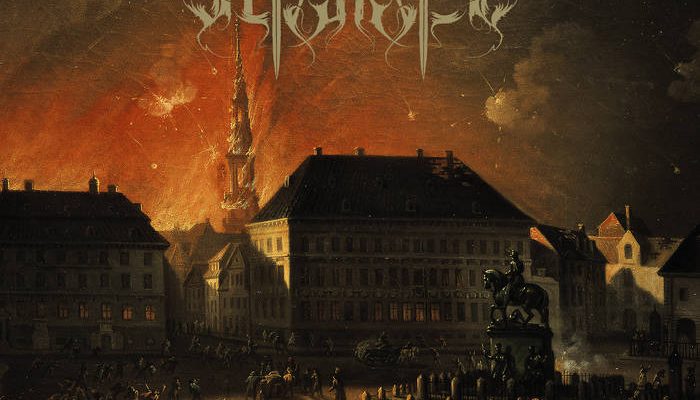 It was an odd coincidence the other day that led me to discover a newcomer artist by the name of Ildskær. It was kind of struggle to find enough information about this anonymous band on social media. With no historic background or whatsoever the band has somehow managed to capture my attention immediately after listening to their single on YouTube. Ildskær is a new rising black metal entity from Denmark formed in the year 2020 by the duo Garðarsson (multi-instrumentalist) and Skóggangr (vocals and lyrics). On their debut album ‘Den Rædsomste Nat’ (The Terrifying Night or The Most Terrible Night) the duo fantastically blends their rhythmic plethora of black metal with cold and icy tremolos. ‘Den Rædsomste Nat’ is centered on a historic incident during the second battle of Copenhagen in 1807 when the British bombarded the Danish capital.

During the Napoleonic wars (1803-1815) the British navy had a primary task to destroy the Danish-Norwegian fleet. This element gives the album a historic theme where Ildskær re-opens the ancient war chapters to find some kind of inspiration. Another aspect of the debut album is the demonstration of the old historic paintings: according to the band’s page, ‘Den Rædsomste Nat’ was painted by C.A. Lorentzen (1748-1828). While the band is a neophyte to black metal, their songs tend to be lengthened by slow and mid-paced tempos, although each of the seven tracks is saturated with pleasing compositions. With the abundance of the melodic pitches of the guitars and the grim vocals, the music takes you back to the early days of black metal. All lyrics of the album were written by famous Danish poets and they somehow are filled with nostalgic inspiration. ‘ Beginning with church organ music, The opening track ‘Rædselsnatten‘ focuses on the tremolo-picked riffs, accompanied by rattling drums and grim vocals.

By the second track ‘Mellem Tvende Troner‘ you’ll slowly be hypnotized by the enthralling melodies and the beautiful tremolos that resonate with the pacing drums. Ildskær emphasizes the great extent of the emotive landscapes. ‘Den Rædsomste Nat‘ has the atmospheric qualities of black metal as the music is steeped in dark rhythms of the guitar. There are many resemblances to bands like Drudkh, although the album is carefully measured by the calculated pace of the drums.

Similar to the first tracks ‘I Korpsets Ræker‘ streams with blazing guitar melodies and grim mourning growls that add cadence to the spellbinding music. Ildskær relies on creating emotional moments throughout this track and the remaining songs. Garðarsson make good use of combining rhythm and lead guitar. There are instant hooks in each song. The drumming performance is quite fundamental to the aesthetics of raw black metal. The band offers some faster tracks such as ‘Det Gyldne Spir‘ which is shaped by the rattling pace of the drums and cold icy guitar melodies.

Ildskær seems to keep the same steady flow on the remaining tracks: the rhythm sections are very soothing and atmospheric at the same time. There is a focus on the chord progression as well, although the music is characterized by the simplicity of the songwriting. The duo seems to capture the dark and melancholic sensation of the second wave of black metal. With a strong harmony and compelling vocals they have produced some gorgeous melodies. ‘Fortæret af Ilden‘, for example, shows how the band grasps smooth talent in transitioning from the fast-paced to slower tempos. The melodic interplay of gloomy melodies and emotions perfectly contrast with each other. Ildskær eschews unnecessary complexity and focuses on the faculty of the melodies.

‘Matrosen‘ is such an emotive track that combines the warm ambiance of the melodies. Although to a certain extent the band balances between the upbeat tempo and atmosphere, the final track ‘Overladt I Fandens Vold‘ showcases the chord progression and the harmonizing patterns of the tremolo-picked riffs. Ildskær wears the traditional Scandinavian influences on its sleeve and offers some compelling tunes of melodic/atmospheric black metal with the approach of the upbeat drums. The last two minutes of this grim finale introduce atmospheric synth that ebbs and flows quite well. On this debut full length, the Danish duo combines hypnotic melodies and crafts some of the most melodic/atmospheric albums of the year 2020. This comes as a high recommendation for the fans of semi-raw and lo-fi black metal.