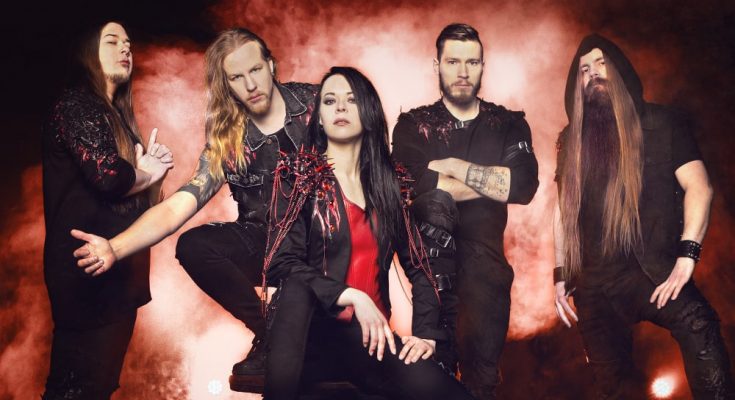 Interview Crimson Sun – “Crimson Sun: we leave a good taste in your mouth!”

The Finnish melodic metal act Crimson Sun made the headlines four years ago with their debut album “Towards The Light” that got metal critics all around the world excited. The band was praised as newcomers of the year and the album received nothing but raving reviews. Now with their new release “Fates” they intend to prove that they’re not a “one-album-wonder”. We caught up with the whole gang to have a quick chat about their music, the new album and more…

To our surprise we got the complete band in front of us with bassist Jukka Jauhiainen, guitarist Joni Junnila, drummer Antti Rantavuo, keyboardist Miikka Hujanen and vocalist Sini Seppälä. When asking them to describe their music for people who don’t know them yet, they promise “very modern, kick-ass melodic metal with super nice female vocals” and are happy to say that after all this years of making music they have their own distinct sound or in their words:

Despite the band being around for almost 20 years under some form, every since Joni and Jukka started making music together, it’s only since 2011 that they’ve operated in this final iteration when Sini joined the band. In the beginning they were more power metal, even had a more progressive metal period, but they see all the time and music before as basically demo phase. So this is Crimson Sun and all the rest should not get too much attention since it’s a blurry demo period. Especially after getting amazing feedback on the first EP (‘The Border‘) they released with Sini on vocals, they decided that this is the way to go and gave it their all to release their first professional full-length back in 2015 with ‘Towards the Light‘.

Sources of inspiration for their music are to be found in a very wide range, going from Soilwork, which sounds nothing like Crimson Sun‘s music, to the more obvious huge female fronted bands like for instance Nightwish. They made sure to point out that they never intended to copy them or any such band, but that of course those influenced their sound somewhat. Just like all the other music they listen to, some elements will seep in their creations.

When we asked them how they would describe a Crimson Sun live show they responded immediately with “energy… and a lot of sweat”. Sini added still that she feels like that when you come to a show of theirs that you’ll feel good after it by their good and positive energy. They actually heard of people catching them supporting a band that they managed to leave them pretty happy. Or like the band ended up with after looking for the right words:

“Crimson Sun: we leave a good taste in your mouth!”

Back when we were talking with Crimson Sun, they were about to release their latest album ‘Fates‘ and it seemed like people, both fans and media, were pretty positive about their new music. Especially looking at how much their singles have been listened to already. ‘Fates‘ is a quite diverse album, while still sounding very much like Crimson Sun, they’ve done a some totally new things that you haven’t heard before of them. Put in fancy words:

You can expect a rollercoaster of emotions!

The lyrics are also really relatable since a lot of them come from their personal experiences and life. For instance the single ‘Essence Of Creation‘ was written by Joni who was inspired by the birth of his first child. Where he’s not writing about that exactly, but rather about the mystery of the creation of life.

After releasing ‘Fates‘, they’re really looking forward to get to touring again. Especially Germany since they have a really good market there. And of course Belgium as well, besides the good crowds also for the good beers.

We shortly had a chat about what they thought was the best album of 2019 and they all seemed to agree that Insomnium‘s latest release ‘Heart Like A Grave‘ is pretty much the best that was released last year. So they advised to listen to that album for sure… besides their own music of course!

They also want to call out to the organizations of 70 000 tons of metal and Wacken that they would love to play there in the hopefully nearby future! One of the guys went to 70 000 tons of metal before and describes it as a week long party that never seems to end. For Wacken their ultimate dream is of course being able to play the main stage there.

After this fun chat with tons of laughing and joking around, I left them in the good care of the next interviewer, wishing them lots of luck with their new release. Earlier this year we also caught them at the release show in Helsinki, for a report and pictures of that go here and here!