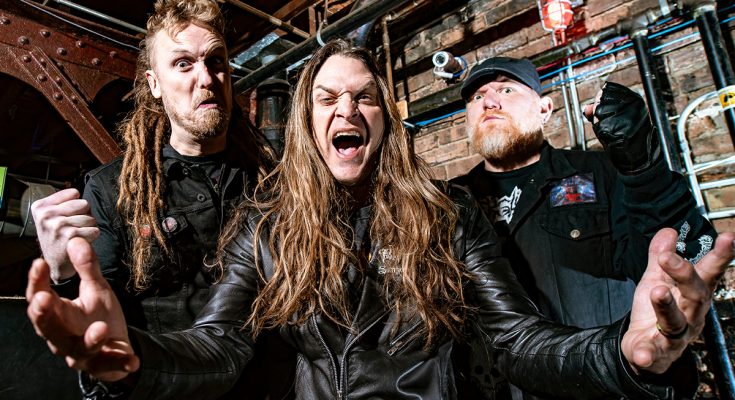 Meeting my heroes in the metal world is one of the biggest perks of this job. People often say you shouldn’t meet them, and it’s true that you can never know when you’ll come across a musician that you adore who then turns out to be a bit of an eccentric (read “complete asshole”). Fortunately, this wasn’t the case with Jungle Rot‘s growler and shredder Dave Matrise, who turned out to be a total sweetheart. Read on to find out how Matrise looks at the underground metal scene and how he feels about life on tour, amongst other anecdotes.

GRIMM: I can only imagine. So ‘Jungle Rot’ is kind of the high point of your career. Despite blending several genres, you still manage to create your own sound. And that will not only please the older generation, but it’ll draw the younger crowds.

Yeah, that’s it. But it’s not limited to that. I also believe that if you get booked in the right packages, you’ll reach a much larger crowd. Packages are everything to a band. We’re still one of those bands that go out and win over the crowds one by one. We never managed to completely get out of the underground, even though we did a couple of big tours with Slayer or Deicide. If we were to get on that right package like, say with Power Trip for example, who also cross genres, that would really help us. It’s amazing how thrash and death are two scenes that are so similar, yet they’re still so divided. We feel like our style could help people cross that gap.
Pro-Pain is also one of those bands that can’t seem to escape the underground. They get such a poor draw in the US, and I think it’s because they can’t get the right packages. It’s been so long since they toured the States. They do great in Europe though. I would love to get booked with those guys, ’cause I’m sure we’d reach more people that way.
We used to have that back in the day. I’m talking ’95 when Jamie Jasta would bring us along on a tour. That’s around the time we started getting heavier and heavier, and where death metal became more prominent in our writing. We would then play with Hatebreed and I just wish we could get back into that mixed scene.

GRIMM: What would be your ideal package then?

Something that’s not just a death metal package. Something different. Like I said, a tour with Power Trip would be ideal. Something a little risky, you know? Like Municipal Waste or Iron Reagan. I would love to do a tour with those guys. Bringing those separate styles together would just be tremendous.

GRIMM: We got one such a mixed package not that long ago in Belgium, where we had Bloodbath, Dimmu Borgir, Hatebreed and Kreator on the same bill. That was an amazing show.

Whoa, man. That had to be just a huge frenzy. Let me tell you, Mille (Kreator, vocals) was actually the guy that got me to start playing guitar. Back in ’85 or ’86 I think, Kreator was touring with Coroner, and I remember leaving the venue in Chicago and thinking “I’m gettin’ a guitar, man. I wanna be just like him”. My dad bough me that guitar, I started playing and months later, there it was. I was writing my own music. Kreator is one of those rare European bands that manage to headline tours in the States, where the thrash market is really difficult. Mille managed to make a whole career out of it where Destruction or Sodom never really came through. Dont know why, because they would definitely draw a crowd. But I once talked to Tom Angelripper (Sodom, vocals & bass) about it and it’s all about the financial aspect. They do fine playing European festivals and such, but touring the States costs money. It’s a little different over there. There’s a lot less respect over there than there is here.

GRIMM: You mean from booking agencies?

In part. I mean, I get it, bands like Sodom make good money over here, but back home nobody wants to pay to book them. It’s a mentality problem. It’s almost as if bookers looked at tours like they were already in the negative, like they were making losses before it even began. It’s hard, man. That’s why we love coming to Europe. We get treated very well here.

GRIMM: That’s strange to me. Well you said it yourself, you get treated quite well over here. That’s how you get bands to come back more often. I would have thought the traveling to be a far bigger issue in the States. You know, hauling people and gear over crazy long distances. Well, to us small Europeans, at least.

Oh yeah, that’s very hard. We live in a van for like five weeks at a time. And we pull a trailer; we never get hotels anymore. We’ll stop at truck stops and sleep there to save cash. We used to get the hotel, but the drives are too long. You’re literally just in and out of them so you’re throwing money away.

Also the welcome you get when you get to the venue isn’t the same anymore. It seems like the respect towards the promoter or the band is gone, because there have been so many losses due to the scene being so up and down. It’s a shame that it’s like that. People have no idea what we go through to make it all happen. The food, sleeping accommodations or other facilities are often sub par. The last thing you wanna do when you’ve been driving for nine hours straight is having to look for a parking spot, you know what I mean? Never an issue here. A lot of European bands know it’s hard for them to tour the States.