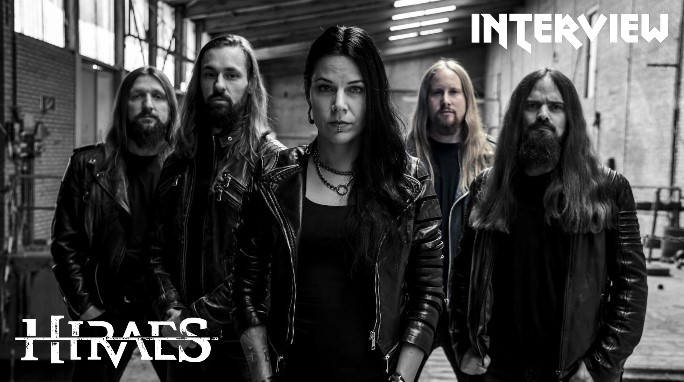 A couple of years back many people were unpleasantly surprised when the rather popular German melodeath outfit Dawn Of Disease announced to be splitting up, shortly after releasing a banger of an album. But all the musicians from the band (with the exception of the vocalist) stuck together and formed a new band, looking for a new vocalist (which they found under the form of Britta Görtz, from the band Critical Mess and formerly Cripper) to continue making music together. Earlier this year, we got our first taste of what that sounded like with Hiraes‘ first single ‘Under Fire’. And they simply blew us and many other people away with the fiery track (and video), coming in with a bang. They are about to release their debut album ‘Solitary’ on Napalm Records, so we thought it to be a good time to have a chat with guitarist and main composer Lukas Kerk…

We had a chat with Lukas Kerk about they all knew immediately that they wanted to stick together to make music after the split of Dawn Of Disease and were lucky enough to have Britta being willing to take on the vocals. Compared to his former band, Lukas feels that they’re more open to different influences now and that Britta is also a positive influence on this. And clearly something is working for them because their first single ‘Under Fire‘ was received extremely well. The song was an excellent choice to start off their existence with an exclamation mark as Lukas said. It was also the first time for all of them to use that much pyrotechnics and learned that you really need to know your place when using that much, especially when you all have long hair (or beards). We also discuss how great it is for them as a starting band to be able to release their debut album on a big label like Napalm Records and how much it’s going to help them getting launched properly. Everything seems to be going well for these guys, great initial feedback to their music, striking cover artwork that really tells a story and a memorable band name with a cool background story. We’re looking forward to hear and see more of them, especially hopefully sometime soon on a stage in real life!

For the full interview go watch on our YouTube channel or right here: