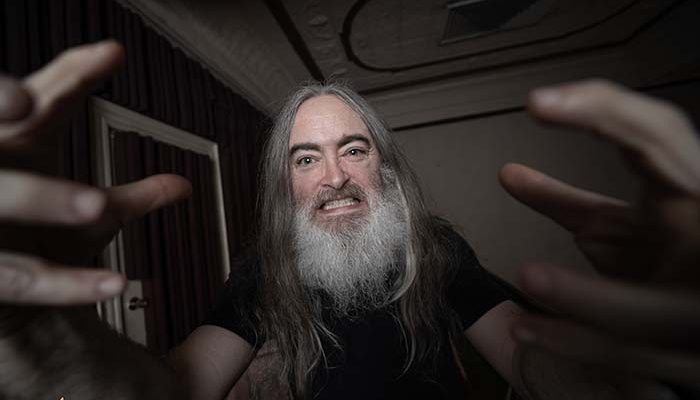 In a world where death metal seems to be growing in both popularity and amounts of bands, it’s good to see that here are still certain constants. One of those, is one of the originators of the New York style of death metal: Incantation. Together with bands like Immolation and Mortician, they solidified their brand of death metal and prove to have been a major influence for many bands to follow in their footsteps. Now recently, Incantation released their new album ‘Sect of Vile Divinities’, which is the perfect moment to send some questions to original member and main vocalist John McEntee…

GRIMM: Thank you for taking the time to answer a couple of questions, it’s an honor. How are you doing?

I’m doing great. It’s awesome to see how well the “Sect of Vile Divinities” album is doing. Beside that I’m happy at home and just been working on doing lots of press. I hope you are well.

GRIMM: Your latest album ‘Sect of Vile Divinities’ has been out for a while now, how satisfied are you with the response of the fans and media?

I’m blown away with how awesome the response has been. We were very happy with the way it came out. but the reaction from our fans and press has been overwhelmingly over the top. It’s so nice to have another pinnacle of our career 30 years in. So life is pretty damn awesome!

GRIMM: It seems that with each studio album your music becomes darker and more coherent, what is the driving force behind the musical aspect of Incantation?

I would say just self-expression. We do music because it means a lot to us. Each album is very sincere. Writing and performing death metal has become an important form of expression for me and the guys. We do it for ourselves and we are happy that so many people can relate to it.

GRIMM: “Sect of Vile Divinities” is personally one of my favorite albums of the year and while listening to the album I have noticed many slow tempos which made me consider this as your most death-doom album to date. Do you see it like that as well?

I don’t see it that way. Not because there isn’t a lot of doom parts on the album. But I just see it as a full journey and the doom parts fit in naturally and just go with it. I do think on this album we incorporated more doom into some of our shorter songs. Which I think shows some new progress in our writing.

GRIMM: Since your 2012 album “Vanquish in Vengeance” there has been a big elaboration on the sound quality and mixing if one would compare them to the previous albums, did this change the process of recording the songs?And if so, in what way?

The biggest and best change we made back then was to work with Dan Swano. For the “Vanquish in Vengeance” album we recorded the basic tracks at Mars Recording Compound then sent it to Dan to mix. But when we were getting ready to record “Dirges of Elysium” Mars Studios was already closed down so that wasn’t an option. So we worked with Dan to set up our own studio to record the parts. We recorded some of that album at Big Dave’s studio and also at Subspecies X studios, the last 2 albums we recorded at our home studio (Severn Studios). As long as we give Dan what he needs to make our album sound great it’s all good.

GRIMM: I also noticed that the new album contains some really cool lead guitars and atmospheric harmonies, do you feel this ingredient was somewhat missing in the past albums?

Hmmmm not really. There is no doubt that having Sonny play solos on it gave it its own flavor. We are very happy with the solos he did for the album along with the solos Luke did. Most of the albums’ harmonies and 2nd guitar parts were done by me and that was something I really wanted to include on the album that we haven’t done much of in a while. I really spent a lot of time to try to get them just right. I push everyone hard to get the best performance as possible as I do myself.

GRIMM: Incantation has gone through many line-up changes and there were several vocalists like Craig Pillard, Daniel Corchado, and of course Paul Ledney. Do you think this is the band’s most coherent lineup? And why did you decide to handle the vocals after all these years?

The core of the band has been Kyle, Chuck and myself for over 12 years now. So we have a real bond and trust in each other’s work. I feel we really work well together, we kinda fill in each other’s gaps. Now with Luke in the band he really rounds things off great. He has no ego and just loves playing and being a part of the band and is integrating himself perfectly. It’s really refreshing. We have been really productive since the beginning of the year with working on new music. So for us it’s very exciting times and also very fun to jam with such great people and good friends.

GRIMM: If you could chose, what is your favorite Incantation album and why?

That is impossible to say. They all hold a special place in my heart!

GRIMM: The U.S. underground metal scene had many capitals and it extended from Florida to the San Francisco to NY. Being one of the original death metal bands from the New York scene, how did you sort of achieve a different sound from the Floridian death metal bands? And how do you manage to maintain its style and sound?

We didn’t really look it as an area specific sound. We were just doing things our way. We weren’t following trends in anyway or from any scene. We always just wanted to be ourselves and tell the world to fuck off if they don’t like it. It was a very punk rock attitude. I think the New York death metal sound just happened naturally. We didn’t really have a main studio that all the bands recorded at or anything like that. Bands like us, Immolation and Mortician all kind of had a lot of the same influences early on, so in a way we kind of came from the same place but we all did something different with our influences which is awesome.

GRIMM: The term “Cavernous death metal” is mainly associated with Incantation and there are many death metal bands today who are mimicking those elements. Why do you think your music has become so influential on the new wave of death metal?

I think people really enjoy the brutal heavy honest vibe we have. For a long time, music was very over produced and fake sounding. But from day one we have always wanted to be heavy as fuck. We are more like cave-man death metal than anything else. So I think there is a new generation of death metal musicians that want to take our lead and express themselves in a primal way.

GRIMM: How do you feel about those newer death metal bands? And how do you think death metal has changed from the last three decades?

Some are good some not so good. But that is anytime in the scene, there are always good bands from all eras of the scene. Of course I like the late 80’s and early 90’s death metal scene the best that was a great time to be in a death metal band. But even today there are some really great bands and I’m really happy to see people getting into raw death metal again after a long time of sterile sounding bands being the most popular for quite some time.

GRIMM: Since things are rather unsure on when proper concerts and touring are going to be possible again, are there any plans for that already or are you just taking it as it comes? Any online events you’re considering to venture into?

Pretty much we are taking it as it comes. We did do a live stream event for the Mexican Metal Fest in early September. We are working on a few other video type projects for the future as well. But nothing will take the place of actually touring and performing with a crowd. We are hoping to return to the live stage in 2021.

GRIMM: Before we conclude this interview any last words for the fans?

Thanks so much for the support and for the interview. We want to thank everyone for the longtime support and the amazing response to the new album “Sect of Vile Divinities” It’s an honor to have so much support after all these years. Please visit us at: www.incantation.com and on our social media sites.  We hope to see you guys on the road in 2021!