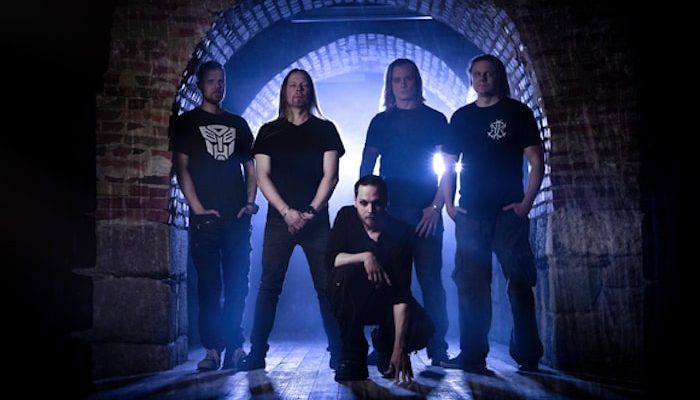 During these harsh pandemic times, live concerts are in most countries a quite rare sight, let alone full-fledged festivals. In Finland we’ve been rather lucky to have a couple of events still to be able to take place. We of course were all too happy to attend SaariHelvetti with an exclusive domestic line-up. On that rather impressive list of Finnish band, the one that we wanted to try and have a bit of a conversation with, was Kaunis Kuolematon. After the release of an EP last year, this year things seem to be getting on a roll for these doomsters with them signing to the up-and-coming label Noble Demon Records and we got the feeling that a new full-length in 3 years might be approaching quite soon.

We sat down with main vocalist Olli, guitarist/vocalist Mikko and bassist Jarno in the nearly completely desolated restaurant of the island where the festival took place. We had a short chat about how it was to play during these difficult times of the pandemic and Mikko was saying that it wasn’t really weird or different for them. They just had been looking forward to play and were happy to see there were so many people who showed up for them and actively engaged with them. The one thing he was somewhat surprised about was how people were acting as if nothing was going on, but sort of understood it since everyone has been reeling to be able to experience live music again.

We also discussed the upcoming new album they are about to release on the new Noble Demon label. At the time they were about ready to wrap up the last mastering processes. They were really curious about how it was going to go like through Noble Demon, what the influence is going to be on the sales and distribution. Noble Demon is for them the ideal label with plenty of quality bands on the same roster, but also not being the biggest label so they won’t get lost somewhere in a corner. It’s giving them space to flourish and be noticed. Also, to this point they’ve been doing almost everything by themselves and feel that the support of a label for certain things will be great for them.

The album itself will be somewhat in the same line as the ones before, but coming from a different place and a couple of different touches here and there. We also touch on the fact that they only sing in Finnish because they like using their own language more because it feels more natural and is easier to write the lyrics. But also because it’s simply important for what they want to say and the way they want to say it, since a lot of Finnish words carry a certain feeling or sentiment with it that you can’t simply translate into English or another language. There is a certain poetry in the language that is hard to find anywhere else and for many metal fans it’s a factor that works very appealing, especially in their brand of doomy music. It just fits.

The new Kaunis Kuolematon album ‘Syttyköön Toinen Aurinko‘ will be out on November 29 via Noble Demon, write it down in your calendar!