Home Interviews Interview Messier – “I’ve always been a fan of great songs, so I want to write songs that actually matter” 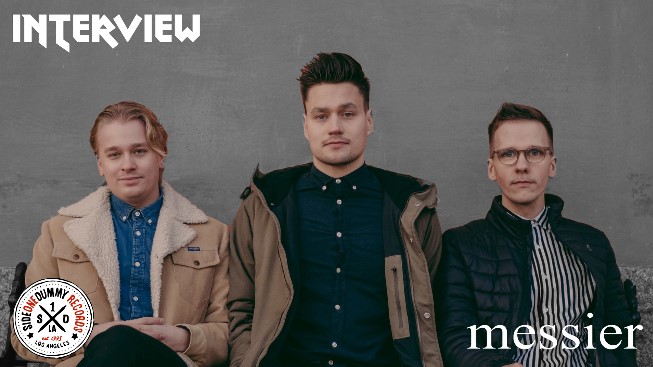 While Finland is well known for its never-ending stream of quality metal bands, there is definitely more to be found there. A band that recently came on our radar and isn’t what you usually would expect from that country, is Messier. Messier plays a brand of light punky rock that easily can be put under the name of indie rock/punk. And while they released only their debut album ‘On Malaise’ about a month ago, it was immediately on the Los Angeles based label SideOneDummy. A label that features and has featured many big names in the indie rock and punk scene on its roster and even has impressive alumni like Flogging Molly. All of that made us all the more intrigued by this band, so when the opportunity arose to meet up with the trio and have a chat about their music, we didn’t hesitate for a moment.

Lauri (vocals/guitar) has been writing music already from ages and while being on an internship in the US, he got really inspired by what was going on during the 2016 elections. When getting back to Finland, he was looking to form his own band and after having played at a Weezer tribute show together, he asked Kristian (drums) and Antti (bass) to get this project going. For the moment Lauri has written all the music and lyrics, to then work with the others on the arrangements. They went through many bad options for a band name and finally ended up at Messier inspired by a song they really like. They felt that they were the only 3 listening to punk-influenced indie music in the place they are living, since there is a whole lot of metal coming from there, but luckily they found each other. They had problems finding a label that fitted their music and goals, so they ended up sending a quick email to SideOneDummy, not expecting much from it. But much to their surprise they got a very quick and positive response to their email and album, to shortly after get to officially sign to the label. Being among quite a few big names in indie music, of which a bunch are very important to them musically, it feels a bit unreal to them. They try to somewhat stick out among their peers in the indie/pop punk scene by writing great songs that matter, like Lauri says. Sadly, touring for their album is not in the books yet, but when we take a moment to dream about the possibility, all 3 of them would love to go on tour with Jeff Rosenstock. An alumni artist from the SideOneDummy label and someone they all look up to immensely.

For the full interview, go check it out on our YouTube channel or watch it right here: