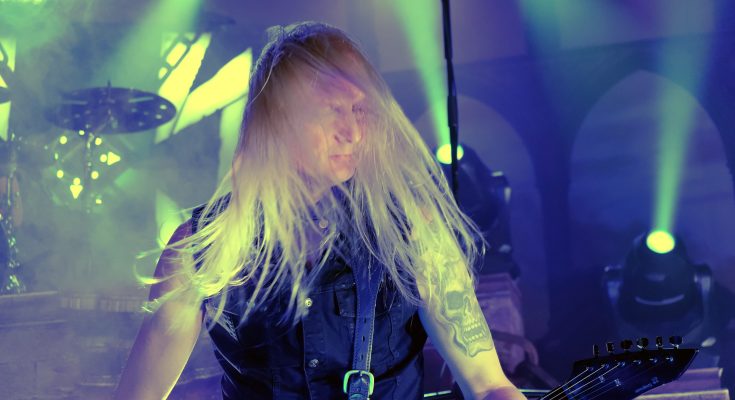 The mighty HammerFall returned to Belgium last month to play us their epic brand of power metal, and mostly to present their last record ‘Dominion’, which was released last August via Napalm Records. But before we got to see these Swedish legends perform, we sat down with guitarist and founder Oscar Dronjak to have a talk about their eleventh record, among other intersting things.

GRIMM: Hi Oscar! Thanks for taking the time to chat with me. First of all congratulations on the new album. I like it a lot. Can you tell me what the difference is between this album and all the others? Do you feel there is a difference?

Oscar: Yes there is. I used to say that every album that we released was the next logical step on the ladder. We always progressed from one album to another, but I feel that the last three ones we did were pretty much the same. Partly because we recorded them in exactly the same way, with the same people, and in the same places, partly due to our state of mind. We had a break for eighteen months. At the end of 2012 en part of 2013, when we didn’t do anything with HammerFall, we took a step back. For example, Joacim‘s dream was to be a musical artist, which he realized on stage with Rock of Ages. So he was busy doing that. But when we came back and starting to write songs again, I think everything clicked and fell into place. So with ‘Dominion‘ it’s just a continuation of where we are now. I do think that we somehow managed to get everything right. I think that with ‘Built to Last’ we got a lot of things right, but we tried to get it all right this time. We always do try, but I think, if you look at the essence of the songs from ‘Dominion‘, you’ll see that all songs have an important place on the album. If you take one out, the album wouldn’t be complete. We tried to write songs in a different way this time, taking into account the impact of the locations where we were writing.

I was writing on tour and on vacacion a lot, wich I’ve never done before. I kept it all for the studio, deciding to write songs when I had inspiration instead of just waiting to be able to do it. That served a really good purpose, it helped the songs become more alive. I also thought writing songs on the road wasn’t something I could do, because everything I would write would sound exactly like what we would play that night. Not only was this untrue, but I discovered that performing for a live crowd is such an adrenaline rush that it got me going. I found I could actually channel this energy and inspiration into writing songs. I estimate I wrote half outside my studio, and it shows in the result. I always say writing a new record is like cooking: you have your ingredients, and you can make more than one dish out of them. Only this time the recipe deserves to be in The Michelin Guide.

It felt really good from the day we started till the day we got the finished product. There was never any doubt as to how this album would sound. Thanks in part to how fast we were going. I’d say that we started recording in January and by October we had 85% of the songs ready. I mean the songs were finished. We didn’t have any more work on them. We could start rehearsing. And that also helped in creating a great atmosphere in the studio: never stressed, never nothing. Everybody knew exactly what to do and what they wanted to accomplish, which also implied a stress free environment. It helped us pick the right moments to bring that energy out. That’s part of the reason that the songs sounds a lot more energetic than on any of the other albums. The exception being the first one, because the first one was like “Yeah, let’s do this!” (laughs). But that’s such a long time ago.